On a frigid Tuesday morning in January, a group of Broadway veterans gather onstage at Feinstein’s/54 Below and belt out the classic ’70s hit “Hot Stuff.”

Situated under the legendary disco nightclub Studio 54, Feinstein’s is a fitting place for such a spectacle. But this show is far more than a live concert—it’s 1978, and these characters have just boarded New York’s first-ever floating discotheque/casino. Little do they know, their cruise ship travels along a fault line. Not only is an earthquake on the way, but a tidal wave and some killer bees to boot.

If this sounds like a disaster, well, that’s the point. Longtime writing partners Seth Rudetsky and Jack Plotnick’s Disaster!, a musical love letter to the epic disaster films of the ’70s, first premiered Off Broadway in 2012. The small production earned rave reviews, and ran for three months. A second production was staged in November 2013, and ran for six months. On February 9, previews begin for a third, grander production at Broadway’s Nederlander Theatre. Neither Mr. Plotnick nor Mr. Rudetsky is a stranger to the Great White Way, but the show’s meteoric ascent is a little startling, given its embrace of many overplayed, cheesy songs of the ’70s—an unlikely cultural goldmine. Then again, remember Mamma Mia?

But there’s more going on with Disaster!, the writers claim.

Though the term “jukebox musical” dogs many an Off Broadway production in New York, where hit songs are often repurposed and re-contextualized in amateur displays of mawkish parody, Disaster! set out to be different. During the Feinstein’s event, lyrics and themes of these ’70s rock, pop and disco songs are seamlessly incorporated into the plot. “Hot Stuff” not only refers to sexual tension, but a subplot where the ship kitchen’s ovens don’t work, and an incident when the ship’s resident scientist and “disaster expert” (played by Mr. Rudetsky) discovers a geothermal anomaly.

Mr. Plotnick and Mr. Rudetsky stressed that every line in the lyrics advances the story, giving the characters a trajectory and allowing the show to be more than parody or straight nostalgia.

“In disaster movies, a bunch of people get together that are completely different and the disaster somehow brings them together and changes them,” Mr. Rudetsky said. “The worst thing that can happen, the life or death disaster…for many people it’s the best thing,” Mr. Plotnick added.

With his countless film and television roles, including recurring parts on Buffy the Vampire Slayer and Ellen, Mr. Plotnick is no stranger to working with actors. Nor is Mr. Rudetsky, who has played piano in numerous Broadway productions, written two Tony opening numbers and hosts two theater-related shows on Sirius XFM radio: Seth’s Big Fat Broadway and Seth Speaks. The writers met in 1993 and started doing sketch comedy together for a show at Carolines on Broadway, aptly named “Plotnick and Rudetsky.”

“It was gonna be called Plotnick and Rudetsky: We Have Awful Last Names, ” quipped Mr. Rudetsky, “but that was was only a joke for Jews like us.”

Every month the duo would feature a famous Broadway guest star, like Betty Buckley or Audra McDonald, placed in crazy situations that forced them to lampoon the show they were most famous for. “It was crazy comedy where [Mr. Plotnick] would put a brick in a stocking and try to kill them,” remembered Mr. Rudetsky. “It taught me to be fearless—with [one] one of these big divas I thought, ‘she’s never gonna do this sketch,’ and Jack said, ‘let’s just ask her!’ You have to sometimes just ask the person.” Though they wouldn’t identify that particular diva by name, Mr. Plotnick remembered that Priscilla Lopez, who played Diana in the original Broadway staging of A Chorus Line, was invited to join the show under similar circumstances.

When the pair sat down to write Disaster!, that same fearless collaborative spirit bore new fruit. Mr. Rudetsky had brought his friends on board for his creative work since his days as a piano major at Oberlin College, when he assembled approximately 40 musicians into a symphony orchestra to perform “Rhapsody in Blue” for his winter term project.

Though Disaster! is on Broadway, Mr. Rudetsky has continued his practice of just calling up pals to star in his productions. When he cast the luminous Adam Pascal, most famous for appearing as Roger in the original Broadway cast of Rent, in the role of Chad, the flirty caterer onboard the casino, Mr. Rudetsky didn’t exactly have to jump through hoops. He first told a story about calling Mr. Pascal’s agent, who called Mr. Pascal manager, comically drawing out the whole rigmarole as a formal process. But Mr. Pascal actually remembers agreeing to join Disaster! via text message at eight in the morning. The cast of Disaster! feels so close-knit because Mr. Rudetsky and Mr. Plotnick wrangled up actors whose talent and virtuosity they could personally attest to, just like in their sketch comedy days.

“Anyone we couldn’t cast that we’re friends with? We’re making ourselves feel better by hoping the show’s going to be a hit,” Mr. Rudetsky said. “We have all these fun fantasies about all our friends we want to keep casting in the show. So it’s kind of bad news for people we’re not friends with, because we already have plans for who we’re going to be replacing. We wish we could cast everyone we knew in that show!” If the show runs long enough, their entire social milieu should get a chance on the stage.

And if it’s that focus on engaging their creative community that’s kept Mr. Plotnick and Mr. Rudetsky successful, things are only looking up for them ahead of Disaster!’s Broadway premiere. The show’s past productions were limited not by ambition, but by the size of the Triad and St. Luke’s Theatres where Disaster was originally staged. Of the many perks to staging the show in the historic Nederlander Theater and working on a bigger budget, the duo is finally getting the legitimate Broadway choreographer’s treatment. Disaster!’s numbers feature the large-scale choreography of JoAnn M. Hunter, whose credits include Spring Awakening and School of Rock. Add to this a full-on chorus to flesh out the harmonies, and Mr. Plotnick and Mr. Rudetsky couldn’t be more excited to see their epic vision for Disaster! fully realized.

“Finally, we can have a set destroyed by an earthquake,” said Mr. Rudetsky. “We couldn’t do that before. Finally, the set can turn upside down from a tidal wave!” It’s very involved, but let’s just say that they designed the scenery to be inverted. You’ll just have to see it for yourself.

“It always was a big huge casino discothèque full of people celebrating in the face of doom, and now we’ve actually got a big huge discothèque!” Mr. Plotnick said. “The world is so rich, it’s not like you’re placing a svelte hat on a goose.” 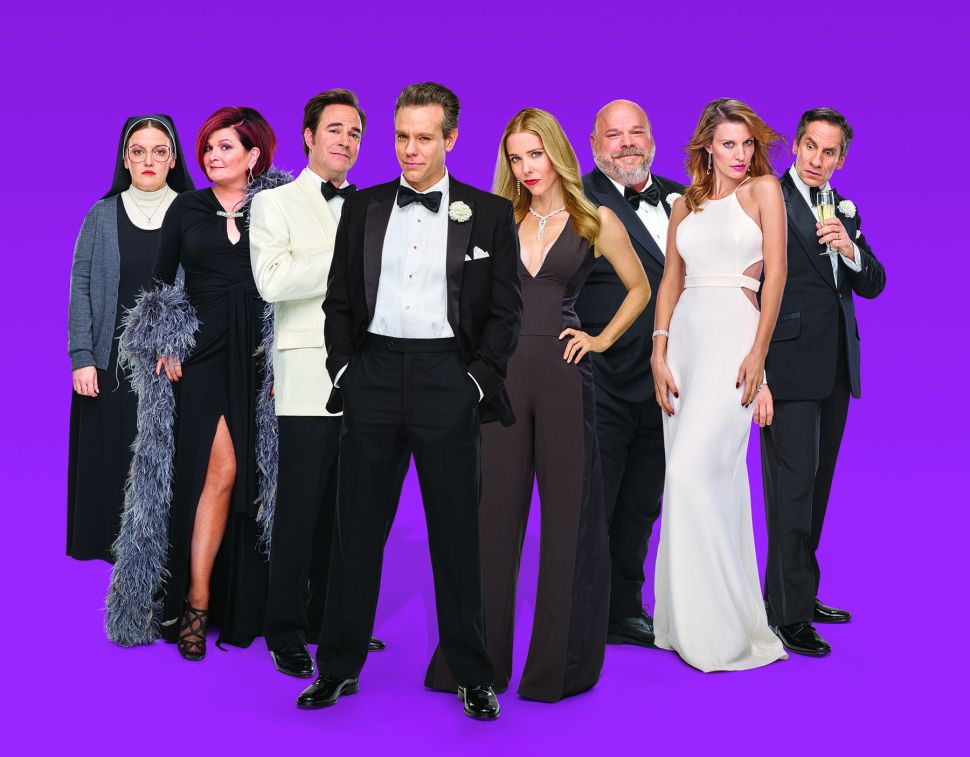