Titled “The Queen of Hearts Ball & Casino Night,” the event this year was Prohibition-era themed. Attendees were able to throw dice and sip 1920s- style cocktails as they heard from Breast Cancer Research Foundation (BCRF), the nation’s largest private funder of breast cancer research, about their innovations in the field of breast cancer treatment. Tickets were priced at $250, with every cent raised going directly to BCRF.

“The Queens of Hearts Ball & Casino Night is one of the most successful fundraising events ever undertaken by an independent group on behalf of BCRF,” said BCRF CEO and President Myra Biblowit in a press release. “CareOne’s dedication is clear.”

Speaking at the event, Ms. Biblowit said that BCRF will be “forever grateful” to Daniel and Elizabeth Straus, who are, respectively, CareOne’s President and Executive Vice President (Elizabeth is also Daniel’s daughter.) “The dollars raised will impact lives for years to come,” she said, describing how the funds will advance discoveries in tumor biology, genetics, prevention and treatment.

In attendance was New York Giants star Jason Pierre Paul, who commended CareOne for their fundraising efforts, saying he was “impressed” by what the raised money for BCRF had already and will now continue to achieve. “It’s all about giving back,” Mr. Pierre Paul said, managing to sound sincere while uttering the exact same language used by every athlete honored at a charity ball ever. “I’m honored to have been a part of this event.”

Steve Weatherford, the beefcake former punter for the Giants, was spotted during the evening, as was retired Met great John Franco.

Ms. Straus dedicated the fundraiser to her grandparents, Gwendolyn and Joseph Straus, whose compassion, she said, provided the bedrock for the importance their family places on philanthropy.

“CareOne’s mission of caring is not just for the thousands of patients its dedicated employees care for daily but also its larger sense of caring as community for each other and for others. Over the last several years, our company has raised over $5,000,000 for philanthropic efforts, including Super Storm Sandy Relief Fund, One Boston Fund and the Valerie Fund,” Mr Staus told the Observer.

“Last night, the company’s mission of caring was validated once again by a sold out event with more than 1,000 attendees coming together to contribute close to $2,000,000 to support the Breast Cancer Research Foundation,” he continued. “I am overwhelmed and inspired by the many individuals, including my daughter Elizabeth who made this happen.” 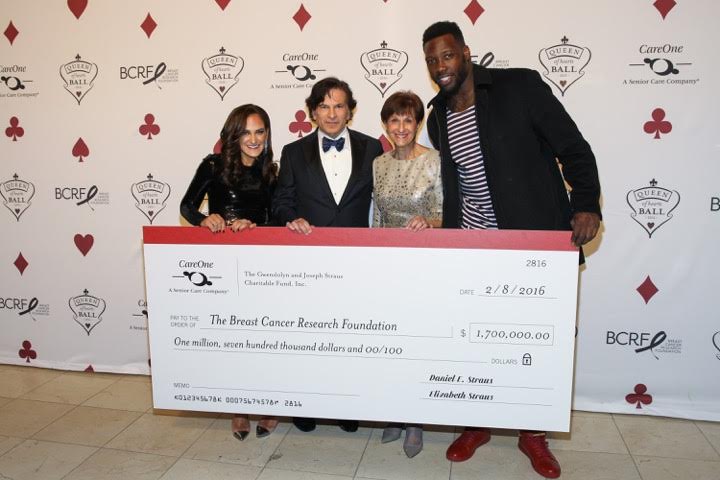