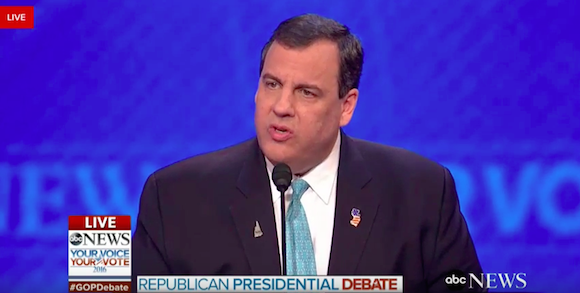 “You have not been involved in a consequential decision where you had to be held accountable. You just simply haven’t,” Christie told his rival, branding Rubio as a GOP version of President Barack Obama, who was also a first-term senator when he ran for president. “Do not make the same mistake again.”

All week, Christie – trying to stay alive in this, his firewall state, has criticized Rubio, whom some establishment types have begun to embrace as the party’s 2016 golden boy.

Christie’s not buying it.

“See Marco, Marco, the thing is this, when you’re president of the United States, when you’re a governor of a state, the memorized 30-second speech where you talk about how great America is at the end of it doesn’t solve one problem for one person,” the New Jersey governor said.
The two candidates got entangled in each other while the rest of the contenders stood back and watched.

SENATOR MARCO RUBIO: Chris, your state got hit by a massive snowstorm two weeks ago. You didn’t even want to go back. They had to shake you into going back. And then you stayed there for 36 hours and then he left and came back to campaign. Those are the facts, here’s the bottom line, this notion that Barack Obama doesn’t know what he’s doing —

SENATOR MARCO RUBIO:  That’s the reason why this campaign is so important because I think this notion, I think this is an important point. We have to understand what we’re going through here. We are not facing a President that doesn’t know what he’s doing. He knows what he is doing. That’s why he’s done the things he’s done. That’s why we have a President that passed Obamacare and the stimulus, all this damage he’s done to America is deliberate. This is a President that’s trying to redefine this country. That’s why this election is truly a referendum on our identity as a nation, as a people. Our future is at stake. This election is not about the past. It is about what kind of country this is going to be in the 21st century and if we elect someone like Barack Obama, a Bernie Sanders, a Hillary Clinton, or anyone like that.  Our children are going to be the first to inherit a diminishes country, that will not happen.

CHRIS CHRISTIE: You know what the shame is, Marco? The shame is that you would actually criticize somebody for showing up to work, plowing the streets, getting the trains running back on time when you have never been responsible for that in your entire life.

SENATOR MARCO RUBIO: He didn’t want to go back.

CHRIS CHRISTIE: And the fact is, I went back, it got done and here’s —

SENATOR MARCO RUBIO: You didn’t want to go back, Chris.

CHRIS CHRISTIE: Oh, so wait a second. Is that one of the skills you get as a United States Senator ESP also? I don’t think it is.

CHRIS CHRISTIE: It gets very unruly when he gets off his talking points. 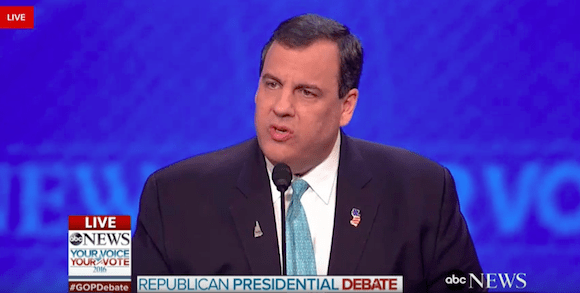