“I believe Laura is delivering a wake-up call,” Whitney Museum director Adam Weinberg said during a packed press conference at the museum yesterday.

Mr. Weinberg delivered thoughtful, if well-rehearsed remarks about the highly anticipated first museum exhibition of filmmaker, journalist and artist Laura Poitras’ work, which opens at the Whitney on February 5.

Ms. Poitras is best known for her Academy award-winning documentary on NSA whistleblower Edward Snowden; she’s also won a Pulitzer Prize for her reporting on government surveillance. But with her Whitney show she treads new territory, presenting work that breaks away from the format of documentary filmmaking and moves into the realm of immersive art installations.

“She makes us truly aware—poignantly and threateningly—that we are the ones being watched,” Mr. Weinberg said.

When it was her turn to take the podium, the artist choked-up as she thanked the many individuals involved with making the show happen—not a minor undertaking, considering the sensitive nature of the material on view.

“This is the most terrifying part of the work,” she said, describing her excitement at sharing the exhibition with audiences.

With “Astro Noise,” Ms. Poitras offers viewers another glimpse at the disturbing realities of mass surveillance, by both exposing and playing with the information and technologies used to observe the public through an immersive experience. (An unintentional consequence of the design is the fact that it’s nearly impossible to photograph—there’s a clever irony that a show about surveillance would itself be hard to document using an iPhone.) There are only five works, but the arresting material is all-consuming, and each gallery leads directly into the next, creating a set path for viewing the works.

The first gallery features a two-channel video, titled O’Say Can You See, displayed on a double-sided screen hung in the center of the room. On one side, in slow motion, is footage Ms. Poitras shot of visitors to Ground Zero in Manhattan in the month after the September 11, 2001 attacks. The expressions on bystanders’ faces range from flashes of disbelief and grief to confusion, apathy and awe.

Meanwhile, on the other side of the screen, is another view of another reaction to the attacks. Ms. Poitras presents footage of what appear to be prisoners being detained and interrogated. According to the exhibition flyer, the men in the video were eventually sent to Guantanamo.

In the next room, visitors are invited to lie on an elevated platform under a projection of the night sky. The film takes visitors to locations in Yemen, Somali Pakistan and the U.S. where the military has allegedly used drones. The sounds of flying drones in Bed Down Location create a white noise in the room that makes the sensation of watching the film while reclining a meditative yet anxiety-producing experience.

The Disposition Matrix—named for database that aids the tracking enemies of the state—is Ms. Poitras’ most interactive installation. The work occupies two narrow hallways and is viewable through small illuminated slits in the walls at eye level and near the floor. Through the holes, visitors are given a glimpse of previously classified government documents and interviews.

In the final gallery visitors realize that not only does the exhibition examine techniques of surveillance but that museumgoers are also the unwitting subjects of that same technology. A feed on a monitor shows viewers watching Bed Down Location in real time, their motions captured through thermal imaging, and a digital monitor next to the screen streams the wireless activity from visitors’ mobile devices.

Here Ms. Poitras also shares her most personal and autobiographical work: an eight-minute film that put her on a secret watch list and made her the subject of investigation by the U.S. government.

The footage (shot in 2004) was taken while the artist was staying with an Iraqi family in Baghdad, and captures—mostly in the background—a firefight nearby. In a narrated voiceover that plays from a speaker overhead, Ms. Poitras explains that it wasn’t until years later she realized just how much that footage would impact her life.

According to The Intercept, an online media outlet that Ms. Poitras co-founded in 2014, the government began monitoring her actions in 2006. Between that year and 2012, she was also subjected to interrogations and detained every time she traveled to and from the U.S. Then, in 2015, the artist sued the U.S. government for documentation of her surveillance and questioning through the Freedom of Information Act.

A few of those documents are on view, enlarged and placed over light boxes, alongside the unedited film in its entirety. What she (and we) learn vaguely by reading between the blacked out sections is that it wasn’t so much the footage that made her a person of interest but her proximity to the event.

“The government never asked to see what I filmed that day,” she says in her voiceover. 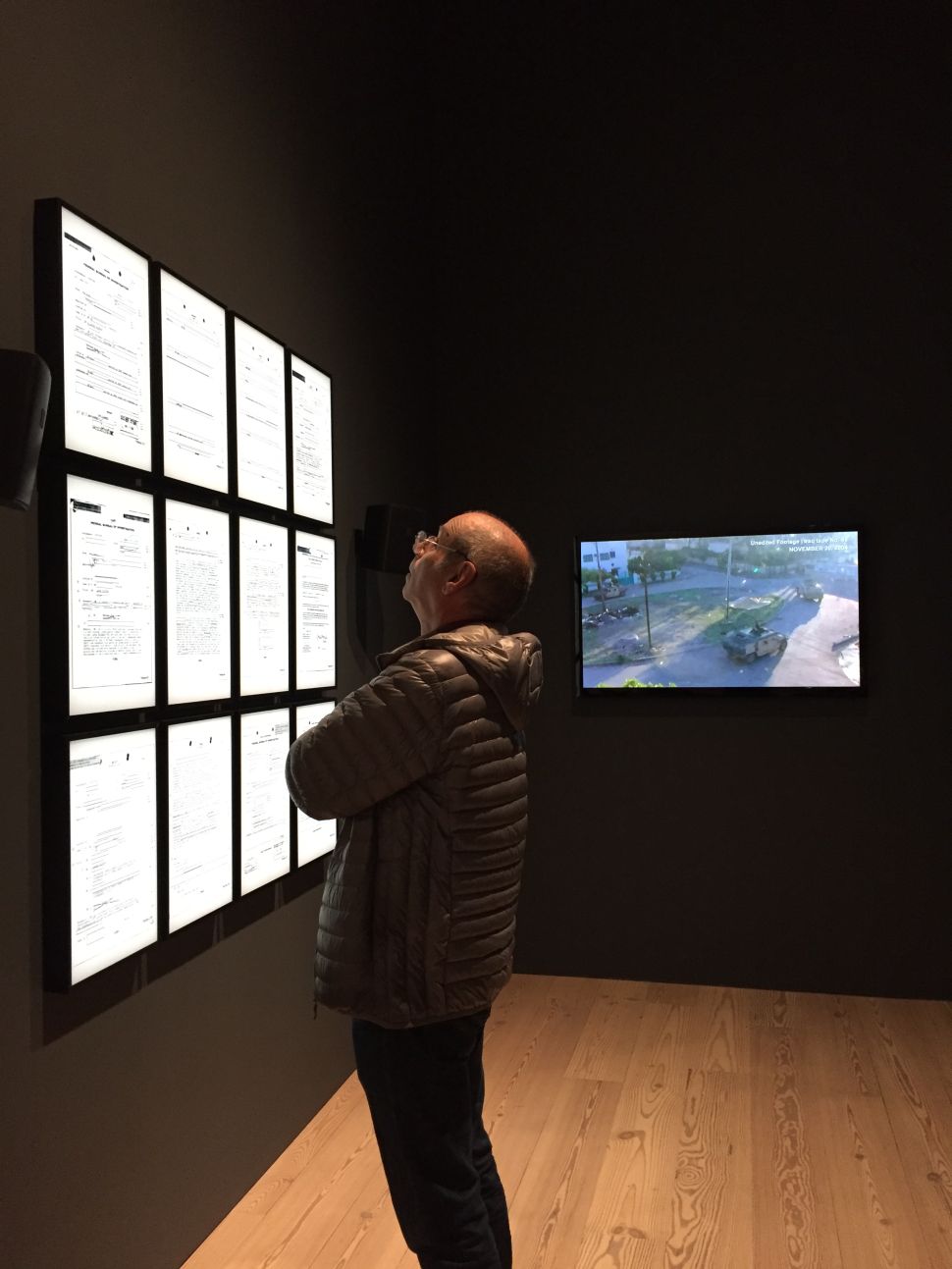