Two days after holdings its first and only public hearing on the subject, the City Council voted to raise its salary by $36,000—while touting reforms it is enacting in exchange for making more money.

The legislation, which the council passed by a vote of 40 to 7, will also raise the salary of other citywide elected officials, but its the Council’s pay that has garnered the most attention and the most controversy. That’s because while other elected officials will be paid the amount suggested by the independent Quadrennial Commission, assigned to review the issue of salaries, the Council decided to pay itself $10,000 more than the commission’s recommendations.

At a hearing last week, council members justified that by saying they should get $10,000 more in financial compensation in exchange for one of the reforms they are agreeing to—giving up outside income, an issue one councilman cited again today.

“It is not fair to say that there should be no monetary compensation for taking away outside income,” said Councilman Jumaane Williams, who does not have any outside income.

Only four members have outside income right now, and they will be allowed to continue to receive it until 2018—even though the raises will go into effect not just immediately but retroactively, back to January 1. That means those four members will be paid $10,000 extra a year for giving up outside income they have not actually given up.

Several people have noted that while the council demands it needs a higher wage, it pays its staffers very little in comparison—some earning less each year than the $36,000 their salaries will increase by. Councilwoman Rosie Mendez spoke about that during her vote, noting she employs single mothers who struggle to live on their wages. Meanwhile, staffers stood in a silent protest in the council chamber balcony.

Otherwise, members were mainly focused on the reforms that go along with the pay hike—staying decidedly on-message after a Wednesday hearing that saw some members go way off-message, including Councilman Ydanis Rodriguez, who represents a district where the median income is $36,112 but insisted Wednesday he should actually be paid $175,000.

In exchange for the raises, the council members are also giving up lulus, which are stipends for leadership positions. Of the 51 council members, 47 had lulus—boosting their $112,500 base salary by $8,000 or more. The job will also be quantified as a full-time one going forward.

“All of this will create more transparency, limit conflicts and really push corruption out to the edges and just limit the influence of outside income, lulus and so many things,” said Councilman Ben Kallos, who seemed to get a bit choked up when discussing the reforms.

Asked whether it was truly reform if the council was only making these changes in exchange for earning more cash, Ms. Mark-Viverito noted the Quadrennial Commission had tied the two issues together.

“Granted those reforms they recommended are only applicable to the Council,” she said, and not other elected officials getting pay hikes, “because right now we’re the only members of the city in terms of elected officials that are part-time. So those sets of reforms were specific to us, and only to us, and as such we needed to act on it all.”

Most of the reforms are very popular with good government groups—who have argued for years that lulus should be abolished and believe that elected officials should be paid well to encourage good candidates to run for office. Still, those groups criticized much about the process—particularly that there was very little public debate surrounding what are major changes to the elected office.

“The reforms passed today were very meaningful. They were not complete, but they went a long way in reforming the ways we compensate our elected officials,” said Dick Dadey, of Citizens Union. “The process was horrible but the outcome more than satisfied me.”

The first and only hearing on the bill was held just two days before they voted on it, leaving little time for any changes based on public input and meaning there was zero public input, beyond the commission’s, before the bill was drafted.

“Yes, the process was maybe not ideal,” Ms. Mark-Viverito said, but she argued there had been public discussion.

The council is passing legislation that will make it likely that future councils do not raise their own pay, but rather the pay of the next crop of elected officials. But they declined to do that themselves. Asked why, Ms. Mark-Viverito said the Quadrennial Commission had recommended an immediate raise, since there hadn’t been one in 10 years—prompting the question of why the council listened to the commission on paying themselves immediately but not on paying themselves $10,000 less.

Seven members voted against the pay hikes, but it’s unclear—and deeply unlikely—whether any will seek to return the extra money they voted against receiving. Councilmen Steven Matteo and Joseph Borelli, two Staten Island Republicans, said in a statement that “there is an inherent and obvious conflict of interest in having to vote oneself a pay raise.”

“We felt the salary recommendations made by the Quadrennial Commission were the starting point of a public conversation about our jobs and our compensation,” they said. “However, once it became clear that the proposed legislation by the Council would go beyond those recommendations, it precluded any potential support from our delegation.”

Councilman Alan Maisel voted against the raise because it went beyond the recommendation of the Quadrennial Commission, which he said he supported. Still, he’ll take the pay—noting he was giving up his $8,000 a year lulu under the new reforms. 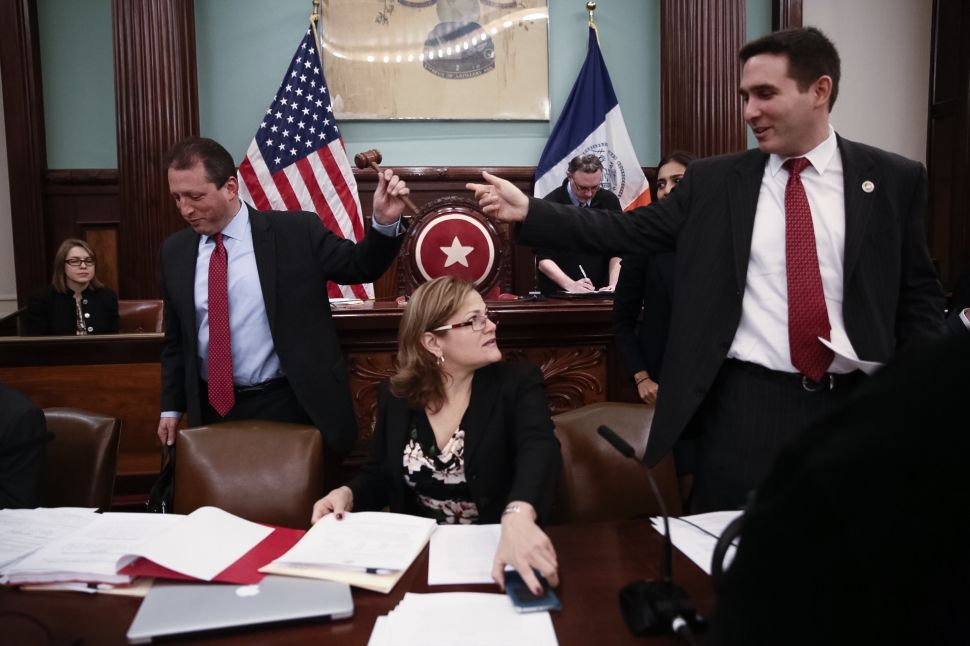