First Gloria Steinem said that young women support Bernie Sanders to get dates with young men. Then former Secretary of State Madeleine Albright said, while Hillary Clinton laughed and nodded with approval, there should be a special place in hell for women who support Mr. Sanders over Ms. Clinton.

Ms. Steinem, who I have admired from the days I was a young man and will admire for many days to come, ultimately retracted and apologized for her remark. The problem is she said it, she meant it, and her remark, while retracted, demonstrates a dangerous mindset that does no service to American women or American politics.

I applaud the young women who support Mr. Sanders.

There are also young women who support Ms. Clinton, not because she is a woman but because they believe she has the experience and ideas to lead the nation.

I applaud the young women who support Ms. Clinton.

Young women are as smart about identifying sexism as all other women, and many young women would not support Mr. Sanders if he were sexist. Period.

Ms. Albright was a brilliant secretary of state under President Clinton. She is a role model for all young people, both women and men, who aspire to reach great heights and achieve great things based on their talent and ability and perseverance regardless of their gender.

But the notion that Ms. Albright promotes the idea there is a special place in hell for young women who do not support Ms. Clinton because she is a woman and do not oppose Mr. Sanders because he is a man running against a woman is insulting to the intelligence of the young women she attacks.

I have warned people close to the Clintons, both publicly in columns and even more aggressively privately as recently as this past weekend, that something has gone dangerously wrong with the Clinton campaign.

Clinton supporter Howard Dean was recently on MSNBC and criticized Mr. Sanders for attacking super PACs. Mr. Dean claimed organized labor is similar to a super PAC. Do Mr. Dean and the Clinton campaign really believe workers organized to fight for higher wages and better benefits are comparable to super PACs financed by Wall Street firms or polluters who would ravage the earth?

Mr. Sanders is not sexist. Period. He has spent a lifetime championing causes important to women. Period. He has battled for every cause from equal pay to equal rights throughout his career. Period.

The most politically suicidal strategy Ms. Clinton should pursue is one that will create so much animosity toward her among any young women—and young men—that they will choose to stay home on election day.

It is a lie to suggest he is sexist. Period. Young women are as smart about identifying sexism as all other women, and many young women would not support Mr. Sanders if he were sexist. Period.

It is not feminism; it is a new form of sexism that represents old forms of condescension and elitism and cynicism to suggest young women should cast their votes solely on the basis of gender.

The last thing Ms. Clinton should be promoting or tolerating is the anti-feminist notion that women should be casting their vote solely on the basis of gender.

The last thing Ms. Clinton should be doing is tolerating or supporting attitudes that could create a generational civil war between women who share common goals and common dreams of equality for all.

The worst tactic Ms. Clinton should be employing or advancing is a political style that only increases the high negative ratings and low trust ratings that continue to plague her today.

The most politically suicidal strategy Ms. Clinton should pursue is one that will create so much animosity towards her among any young women—and young men—that they will choose to stay home on election day.

There are no good or valid reasons for the Clinton campaign or any of its surrogates to wage a generational war on young women that insults their intelligence or demeans their right to support the candidate of their choice regardless of that candidate’s gender. Period. 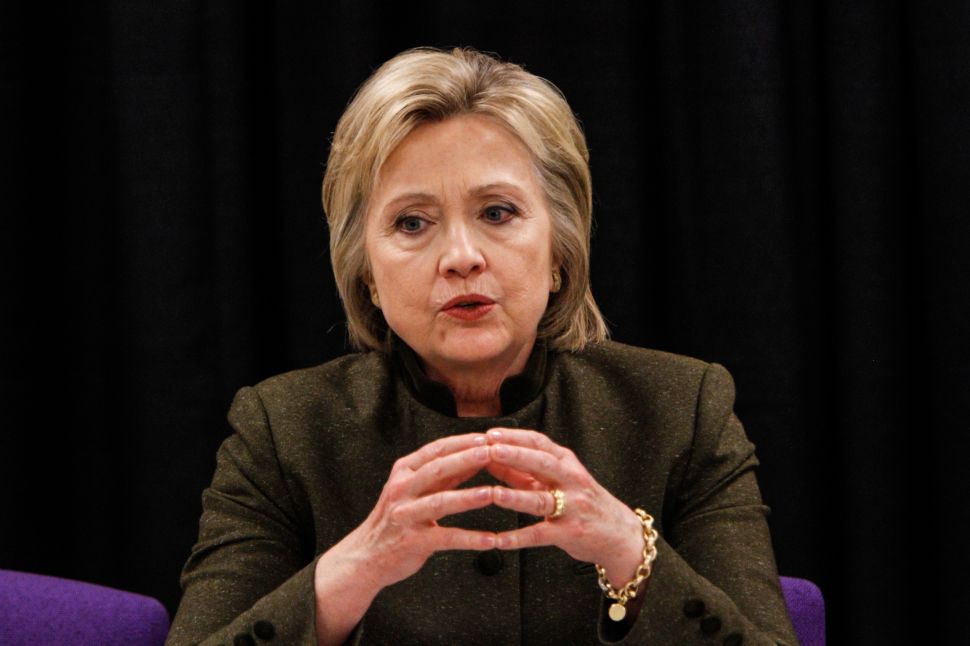