The Observer called me this week about tension in my relationship with my friend Cory Booker, now Senator from New Jersey.

My friendship with Cory goes back 25 years. We met in our early twenties when I was Rabbi at Oxford and we became the closest of friends. Over those years, that bond strengthened and deepened. Cory became a part of my family. He bounced my children on his knee, told them bedtime stories, was an important part of their childhood as he watched them grow up, and our home became a second home to him. Cory cooked “kosher soul food” with my wife Debbie, spent hundreds of Shabbat meals at my home, and together and we studied thousands of hours of Torah together. He asked me to move the date of my daughter’s wedding to one where he could attend because, he said, “Your kids are like mine.”

Early in his political career, I believed in Cory so much that I introduced him to the leadership of the American Jewish community, its leading philanthropists, and brought him into its inner circle. I organized speeches for him in synagogues across the United States and in front of leading donor organizations like AIPAC and NORPAC. His speeches to the community were filled with Jewish idioms and Biblical expressions I taught him over the years. Cory reiterated countless times in public talks—both on his own and lectures we gave together—the impact that Judaism, the Jewish community and our friendship had on his life. He said my impact as Rabbi and that of the Jews as a community was life-transforming and one of the most influential in his entire existence.

To be sure, we had our share of political disagreements. But we were brothers with a bond so close that I truly believed nothing could come between us.

Cory promised the Jewish audiences before whom I brought him that he would be the best friend Israel could possibly have and would always stand up for the Jewish people in their hour of need. The Jewish community responded by making Cory Booker the single largest recipient of Jewish political contributions of any candidate in the nation.

Then came the Iran deal.

Cory Booker shocked the Jewish community to its core by coming out in favor of a regime that promised the Jews a second holocaust. News reports of tension in our relationship stemming from how Cory came out to legitimize Iran, and then supported the Democratic filibuster to block even a vote in the Senate, tell only part of the story.

The rest of the story is the shocking way Cory turned his back on not just the Jewish community but on Israel, including snubbing its most prominent representatives.

Particularly hurtful and mystifying was how Cory Booker refused to meet the Israeli Ambassador to the United States, Ron Dermer, so that the Jewish State could make its case about the dangers of the deal directly.

Like Cory, Ron served as my student at Oxford and remains one of my closest friends and one of my proudest accomplishments. Few people I have met in my life exhibit the integrity and conviction of Ambassador Dermer. He is a Jewish light to the nations.

Given their shared history at Oxford as Presidents of my Oxford L’Chaim Society, I introduced Cory and Ron many years ago and then reconnected them in October, 2013, when Cory was first elected Senator and Ron became Israel’s Ambassador to the United States. I took them out for dinner at a Washington kosher restaurant and we had a blast and reminisced over old times. Tulsi Gabbard, the up-and-coming Democratic superstar Congresswoman from Hawaii, who has since become a friend, joined us.

A year and a half later, with the impending vote on Iran coming up that would determine Israel’s security future, I well understood the powerful forces bearing down on Cory. The President and the Democratic Party needed his support for the signature foreign policy deal of the entire Administration.

But Israel had a right to be heard through the eloquent officers of its appointed representative, Ambassador Dermer, who met with hundreds of members of Congress to make the case for the dangers of Iran to Israel and the Middle East. Iran was promising they would annihilate another six million Jews and a million Arabs in Israel. The international community dare not legitimize a government that promises to exterminate the Jewish people or give them $150 billion to murder innocent men, women and children around the world in terror attacks.

But try as I might as a Rabbi pleading for my people, Cory would not meet Ron. He refused to see the Ambassador.

It brought to mind a famous story about Harry Truman. The president was caught in a similar dilemma facing powerful forces demanding he reject recognizing the newly founded Jewish state in order not to antagonize America’s Arab allies. Mr. Truman’s own Secretary of State, the war hero George Marshall, told Mr. Truman that if he recognized Israel he would vote for in the next election for Mr. Truman’s opponent.

Mr. Truman was opposed to the UN partition plan. Chaim Weizmann, old and in failing health, had traversed the globe to make the case directly to the President. But Mr. Truman would not meet him. At that point, Eddie Jacobson, Mr. Truman’s close friend and former business partner, intervened, and begged him to take the meeting. “Mr. President, Harry, you’ve got to do me this one favor. See this tired, old man. He’s come halfway across the world to see you. Just give him a few minutes of your time.” Mr. Truman agreed and Mr. Weitzman persuaded him, leading directly to American recognition of the Jewish State. Without Mr. Jacobson’s intervention, it might not have happened.

But despite my persistence as a spiritual leader supplicating for the nation of Israel’s future, Cory and his staff persisted in refusing the request that came from the Israeli Embassy. Ultimately, only a phone call was arranged.

It was then that I tried to resurrect the idea of Cory meeting Holocaust survivor and Nobel Peace Laureate Elie Wiesel, who had come out strongly in opposition to Iran remaining nuclear in a series of full-page New York Times ads taken out by our organization, The World Values Network.

‘If you are silent at this moment, salvation will come to the Jews from another place and you and your father’s household will be lost.’

In the Bible we are told how Queen Esther’s meeting with Ahasuerus, King of Persia, convinced him to change the decree of annihilation against the Jewish people. If anyone could serve this role in today’s times it was Elie Wiesel, the greatest living Jewish personality and someone to whom I had introduced Cory many years before. They had become friendly and Cory quoted Mr. Wiesel’s books liberally before Jewish audiences. Surely Cory would meet the living face of the six million martyrs of the holocaust. But once again, after initially agreeing and having that meeting scuttled by scheduling issues, Cory would not meet with Elie Wiesel.

With all this happening, I had to make a decision. I could put my friendship with Cory first and leave it be, even as a catastrophic deal went through which endangered the future of my people, or I could speak out.

The words of Mordechai to Esther haunted me. “If you are silent at this moment, salvation will come to the Jews from another place and you and your father’s household will be lost.”

I had a responsibility to speak out for my people and I made a public call for Cory to oppose the deal and condemn Iran’s genocidal intent against the Jewish people.

Friendship is of paramount importance, but nothing transcends the need to speak out against genocide. Cory is well aware of my life’s work to fight genocide. He is aware of my friendship with President Paul Kagame of Rwanda, who chose me to deliver the keynote speaker on the 20th anniversary of the genocide at Amohoro National Stadium in Kigali. He is aware that I took my children all the way to Rwanda to bare witness to the genocide sites. He is aware of my friendship with Samantha Power and how I defied the American Jewish community in publicly supporting her nomination for UN Ambassador, against those who accused her of being anti-Israel, because of her staunch opposition to genocide. And he is aware that amid my infinite love for, and attachment to, the Jewish state, where right now my eldest son in serving in the IDF, I have even been publicly critical of Israel for not recognizing the Armenian genocide in order to placate Turkish tyrant Erdogan.

If Cory expected me to be silent while playing politics with the future of my people, I could not do that. If he expected me, in the name of our soul-friendship and my 25 years of dedication and personal loyalty, to hold my tongue while Iran is given an astonishing sum to kill people and threaten Jews with a second Holocaust, it was asking the impossible.

Friendship is vital, beautiful, and important. But when it comes to mass murder, the individual has a moral imperative to speak out.

As for Cory omitting mention of me in his book because of his annoyance at my criticism of his support for Iran, it’s a small price to pay for speaking out for the protection of my people and in opposition to genocide. He may be upset that I criticized his decision. I understand that he feels that in the name of friendship I should have been silent. No doubt he’ll get over it. Protesting incitement to genocide transcends every consideration, including what is to both of us a very special, loving, and deep friendship.

The Washington Post calls Shmuley Boteach “the most famous Rabbi in America.” He is founder of The World Values Network and is the international best-selling author of 30 books. Next month he will publish “The Israel Warrior: Fighting the Battles of the Jewish State in the Marketplace of Ideas.” Follow him on Twitter @RabbiShmuley. 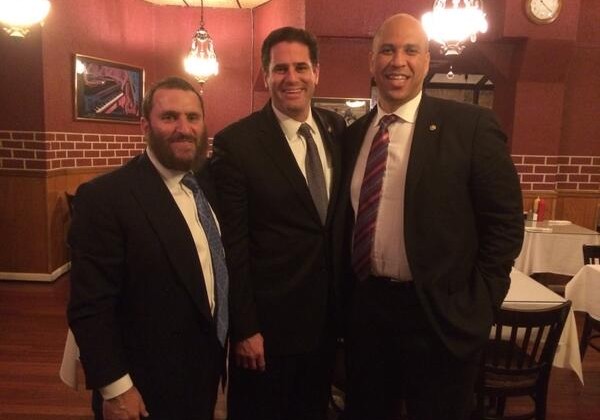