With a straight face Sunday, Republican presidential candidate Donald Trump said he did not know enough about David Duke or the Ku Klux Klan to turn down their endorsements.

One wonders if Mr. Trump has ever heard of the Mob or the Mafia. One of his four remaining Republican rivals, Senator Ted Cruz of Texas, told at least two Sunday talk-show hosts that the real-estate billionaire might have dealt with organized crime to build skyscrapers in New York and elsewhere.

The smear came during a discussion of Mr. Trump’s tax returns. Although he has promised to make them public, Mr. Trump said he cannot do it until the Internal Revenue Service is done with its audit. Last week, the defeated 2012 Republican presidential candidate Mitt Romney said there might be a “bombshell” in Mr. Trump’s returns.

“There have been multiple media reports about Donald’s business dealing with the Mob, with the Mafia,” Mr. Cruz told Chuck Todd on NBC’s Meet the Press. “Maybe his taxes show those business dealings are a lot more extensive than has been reported.”

On ABC’s This Week, Mr. Cruz kept the thought in play in a chat with host George Stephanopoulos.

“Business dealings with the Mafia?” he said.

“He’s done some deal with S & A concrete, which was owned by two of the big crime families in New York,” Mr. Cruz said. “Republican primary voters deserve to know if there’s a scandal.”

Another strange moment came on NBC when Mr. Todd asked Mr. Trump about posting a Twitter message that quoted Benito Mussolini, the Italian Fascist dictator before and during World War II.

“It is better to live one day as a lion than 100 years as a sheep,” Mr. Mussolini said.

TODD: “You want to be associated with a Fascist?”

TRUMP: “No, I want to be associated with interesting quotes.”

‘If Donald Trump were to ever become the nominee, immediately the hounds of hell would descend upon him. They’re going to tear him apart.’

There is no shortage of them as the primary grind moves to “Super Tuesday” when Republicans will vote in 11 states, many in the Deep South, making this an S.E.C. football primary to some and a Confederate primary to others.

Among the states is Texas. If Mr. Cruz cannot win his home state, he might have to unite with Florida Senator Marco Rubio against the Trump juggernaut now headed for a final-round run against either Hillary Clinton or Bernie Sanders of the Democrats.

Mr. Rubio said much of this with smiles that seemed forced and programmed. But that expression is in stark contrast to Mr. Cruz’s snarl and Mr. Trump’s sometimes-grumpy visage.

Discussing one of Mr. Trump’s failed businesses, “Trump University,” Mr. Rubio said: “Donald Trump is a world-class con artist. If Donald Trump were to ever become the nominee, immediately the hounds of hell would descend upon him. They’re going to tear him apart.”

Mr. Dickerson asked Mr. Rubio about his prediction of calamity for the Republicans.

“If he’s our nominee, it would be the end of the Republican party,” Mr. Rubio told Mr. Dickerson. “It will split us and splinter us in a way we may never able to recover. Democrats will be joyful.”

And on Fox News Sunday, Mr. Rubio warned Mr. Wallace: “A first-rate con artist is on the verge of taking over the party of Lincoln and Reagan.” He said Mr. Trump is “preying on those fears and anxieties” rampant in the land from many directions and for many reasons.

Over at ABC, Katrina vanden Heuvel said it will be “media malpractice if Trumpian authoritarianism wins.”

“We’re witnessing a right-wing populism,” she said. “The obscene obsession of cable TV, primarily, the lust for cheap, high ratings created a politics of spectacle. And I do think when we look back at this election—this upending, rules-changing, shredding election – the media has played a critical role.”

“Chris Christie and Donald Trump have one thing in common,” she said. “Bullies. Bullies come together. We now have a ticket: The wall builder and the bridge closer.” (Mr. Trump wants to build a wall on the Southern border to keep out Mexicans. Some of Mr. Christie’s aides were charged with closing part of the George Washington Bridge out of political spite).

“Donald Trump is a Frankenstein,” Ms. Vanden Heuvel said, rejecting the idea that the two sides are Mr. Trump against a Republican establishment.

“Donald Trump is the product of a Republican party which has played dog-whistle racism and nativism for decades,” Ms. Vanden Heuvel continued.

His timing is perfect as American working people emerge from the Great Recession with strong misgivings about elected leaders and those whose wealth dominates the disparate economy.

“There is so much anger now,” Erick Erickson said. “People are making decisions emotionally.”

On the low road, Mr. Rubio has adopted Mr. Trump’s use of the gratuitous personal insult.

“Donald Trump likes to sue people,” Mr. Rubio said in a taped comment on NBC. “He should sue whoever did that to his face.” Mr. Trump has taken to referring to his younger foe as “Little Marco.”

The conservative candidates will debate again this Thursday on Fox News Channel from Detroit’s Fox Theater. It will be the first re-match of moderator Megyn Kelly against Mr. Trump, who insulted her in a crude way a couple months ago after she challenged Mr. Trump’s long history of sexist comments and misogyny.

Another sparring match between a Fox host and a candidate came Sunday when Mr. Matthews and Mr. Cruz grew testy with this exchange.

WALLACE: “Please don’t accuse me of something I didn’t do.”

CRUZ: “Let me know when I’m allowed to answer.”

WALLACE: “Well, don’t accuse me of things I didn’t do.”

(The tiff was over allegations of opposition research used to attack Mr. Cruz).

One ominous footnote came on Face the Nation when Mr. Trump told John Dickerson that he was having second thoughts about supporting the Republican candidate, despite having signed a pledge to do so.

“I will abide by the pledge unless they default,” Mr. Trump said. “But as far as I’m concerned, they’re defaulting.”

The audience is stacked against him in debates, Mr. Trump said. The logical extension of his vague threat is a Trump-led third party candidacy somewhat like that of George Wallace in 1968.

Some passions from back then are renewed today in movements such as “Black Lives Matter.” Mr. Tapper on CNN asked Republican Tennessee Congresswoman Marsha Blackburn about Mr. Trump.

“I asked Donald Trump three times if he would disavow the support of David Duke and the Ku Klux Klan,” Mr. Tapper said to Ms. Blackburn. “He said he did not know enough about them. Is that an acceptable answer to you?”

“To me, that would not be an acceptable answer,” Ms. Blackburn said. “I think that should have been an easy answer for him to give.”

Ms. Blackburn did not specify what that answer might have been, leaving her answer a little ambiguous.

Despite her being from Tennessee, we must assume she would choose disavow the support of the men with the white sheets, the burning crosses and who knows what else. 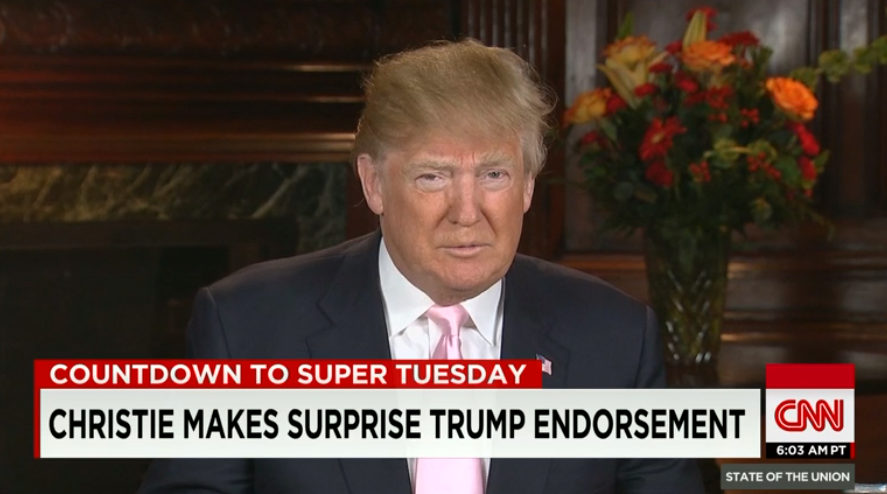