By nabbing a role in Hulu’s 11.22.63–based on the Stephen King novel of the same name, and produced by JJ Abrams–Australian actor Daniel Webber secured his first high-profile role in the Unite States. This role also just happens to be one of the most infamous men in U.S history–Lee Harvey Oswald.

The eight-episode series, which premiered in its entirety February 15, follows Jake Epping (James Franco), an ordinary high-school teacher tasked with travelling back in time and preventing Oswald from assassinating John F. Kennedy. Prior to 11.22.63‘s premiere, we hopped on the phone with Mr. Webber to find out what it takes to get in the mind of–and find sympathy with–a man who murdered the president.

Once you officially had the role, who joined in the discussions? Did you talk to Stephen King at all?

No..well I guess my conversation with Stephen King was in the novel. I didn’t have much correspondence, I was back in Australia. I just had to go off what I know and the research I could do. Which was kind of great, because I got to figure who this man was before ever seeing a script.

Originally I started with Stephen King’s book. But then aside from that I looked into the political context of the 60s, the forces that were at play, and the Cold War. Khrushchev and Kennedy, and all these big players and where Lee was placed in among all of that. How Lee got involved, and what all his aspirations and dreams were, what he was trying to achieve. Just learning about him, and learning a lot about his mother.

I think one of the things that I realized early on that I wanted to do was understand his childhood, and him from an earlier age. I realized he ends up being a projection of his mother. He’s got all of the same traits that she had, only heightened–she was grandiose, she was controlling. And Lee’s childhood was sort of this bottomless pit of unfulfillment, which led to this desire to be great, this belief that he is great. He never wavered from that, even when life was clearly pointing in the opposite direction.

Did it ever cross your mind that your first big role in the States is playing one of the most hated men in US history?

Is he actually one of the most hated men in America? Would you say so?

I think the job of an actor is to try and understand that character personally. If I go into it with the mindset of being a hated man, or a villain, I’d never be able to play that man. It’s actually interesting hearing questions like this, because it was never something I was concerned or aware of. I was so involved with telling our story, and to do that I couldn’t look at those judgement of him.

Seeing as how there’s not much video of Lee, how did you decide on the physicality and sound of the role?

I spent a lot of time in a hotel room, trying different things [laughs]. The voice and the physicality were the two most important aspects for me to get. I probably spent about two hours a day going through different monologues, speeches, things that I though he’d say, or had said. I had about five different recordings of his voice, and each one of them sounds like a different human being. From him being in an interivew to him being with friends playing around, him doing Shakespeare, him with the press scrum, all sound like three completely different men. It was funny little nuances, a lot of twang, expression.

One thing I found with his voice was this popping energy to it. It’s almost like it’s being held back until he finally says something, and the words erupt and pop out of him.

Were you surprised over anything you found particularly relatable or sympathetic in Lee?

The main thing thing is a deep sense of loneliness, and isolation. It’s something that is so universal, and it wasn’t even something that was a conscious thought, where I was going “Oh, this guy is lonely and needs to be loved.” It wasn’t like that. It just came about because of what I saw, and it was a unique way into him. I really enjoyed playing him because I saw, from that point of view, that’s a relatable thing; feeling like you’re an outsider, like you’re alone, like you’ve got to prove yourself. That’s something we all know. 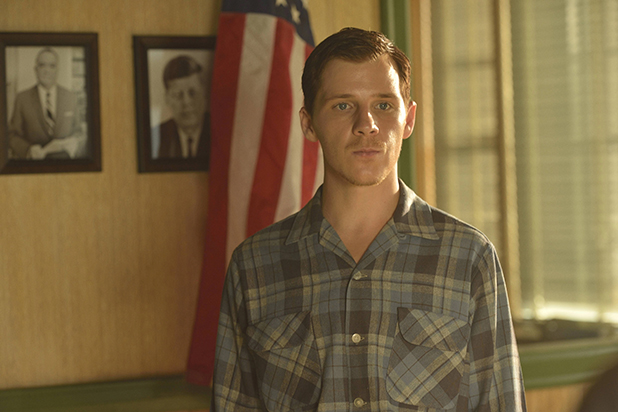