Before DC’s Legends of Tomorrow started up, I’d considered several possible thematic influences that might crop up. The Magic School Bus was definitely not among them.

Sure enough, as LoT continues shuffling its gigantic ensemble cast and regrouping them into new combinations each week, “Blood Ties” results in its two resident brains, Professor Stein and Ray, teaming up to save a dying Kendra by taking a page from Ms. Frizzle’s playbook. On a related note, unconscious, half-dying Kendra shrieking for dead Carter is easily the most interesting incarnation of any of the Kendras we’ve seen so far. So that’s something.

It’s strange. After a relatively high-stakes episode last week, culminating in the actual death of Hawkbro (an honest-to-god main character), nothing of much importance happens this week. The team simply doesn’t do anything that furthers their mission. Their “Blood Ties” exploits are the adventure-equivalent of riding exercise bikes; sure, they bulk up and grow as people a little bit, duly learning their lessons-of-the-week, but they don’t actually get anywhere.

Also, they’ve been stuck in 1975 for an entire three episodes now. I was promised frequent time travel, and I want my money back, damn it.

The big kerfuffle this week lay in the fact that Rip Hunter, inept a leader as ever, neglected to tell his rag-tag crew that he’d actually tried (and failed) to take Savage out himself, once, in 1700 B.C. Ancient Egypt (which for some inexplicable reason is still cast in heavily-stylized graphic novel lighting). As he’s sitting moody in his office, Sara sneaks up on Rip like the adorable ex-assassin that she is and comes up with the brill idea to bankrupt Savage in order to delay his rise to power by a few decades. Because apparently the idea is to just stave off Vandal’s world domination in order to save Rip’s family in 2166, and screw those nerds in 2216, they’re on their own?

Inconsequential and faulty a plan as this is, Rip and Sara leave the ship without a word to anyone else and head to Savage’s bank to engage in computer-hackery and steal all of his dough, with Sara wearing yet another fabulous 1970s get-up that makes me almost not care that we’ve been stuck in 1975 for three whole episodes, folks.

Except, just kidding, this is Sara and Rip we’re talking about. Computer-hackery is a no-go; it’s fisticuffs and hand weaponry all the way. Sara gets to go to town on Savage’s banker lackeys with a slew of up-the-sleeves knives, which is plenty of fun for us viewers – but not so fun for poor Sara who, apparently, is still struggling with that pesky Lazarus Pit resurrection-induced bloodlust.

Meanwhile, Jefferson is tasked with restoring the drop-ship to working order (because I, too, would trust a decidedly mediocre 21st century auto mechanic with my badass spaceship from the future). Jax is waylaid by Snart and Rory, who far too easily talk him into acting as their getaway “driver” in a quickie heist side trip that they’re planning. Snart tries to play it off like one of his typical thieving runs (this time, to pick up a jewel from 1975 Central City), but almost immediately it’s clear that this one is personal. Snart plans to retrieve the jewel that his father was set to steal in 1975, an act that landed the elder Snart in jail, which in turn changed him into the abusive jerk-wad we’ve seen elsewhere in the Flarrowverse.

This fails, of course, because Snart’s father is an irredeemable d-bag (and kind of dumb), but in the process Snart gets a shot of much-needed character depth. We see little Snart as a child, and big Snart warns his boy-self to always look out for number one and never allow anyone to hurt him physically or emotionally and – sorry, is someone cutting onions in here?

Wentworth Miller is flawless every week as hamtastic Captain Cold, so it’s a pleasant surprise that he can easily pull off snark-free, emotional material for this over-the-top character as well. The fact that Snart messing with the past and basically telling his lowlife dad outright that he’s little Leo all grown up from the future has no consequence whatsoever is odd, but we’ll give him a pass because he’s the ever-fabulous Snart. And Rip has likely thrown up his hands and stopped trying to get the crew to stop fudging the timeline at this point, so who are we to judge anyway? If the Time Lord is cool with it, we’re cool with it.

Back on the Magic School Bus Waverider, Martin and Ray have a series of heart-to-hearts. Ray is suffering from sudden onset lack of hero confidence (why is this suddenly an issue?) when it comes time to get atomized and asteroid-blast the remnants of dagger floating their way towards Kendra’s heart. This culminates in Ray confiding in Martin about the death of Ray’s fiancé, after Martin is like “Oh, right, dude, I totes remember you and your physics smarts now” (spoiler alert: that’s a lie, Martin doesn’t remember Ray at all).

Martin’s made-up flattery and his two-line pep talk are somehow enough for Ray to man up and save Kendra, despite his inability to save dead fiancé Anna. It’s the flimsiest subplot of this already-flimsy episode, mostly because we’ve already seen Ray deal with these exact issues on Arrow so it isn’t particularly hard-hitting. (I don’t know, if you’re a LoT viewer who hasn’t watched Arrow, maybe I’m totally off the mark here and you thought it was really riveting or something.)

Back with Sara and Rip, the charming twosome kidnap banker Blake and remand him to the ship, where they lightly torture some information out of him. Blake reveals that Savage’s followers consider Rip a sort of ancient boogeyman from that one failed attempt to kill Savage in noir Ancient Egypt. Rip’s attack wasn’t even a little bit successful, so I don’t buy the fact that Vandal perpetuated this scary story about his would-be assassin. Blake also mentions that Savage has plans for Carter’s body, his “vessel.”

Rip, Captain Hothead, refuses to listen to Sara’s warning and wait for the rest of the team before retrieving Carter’s body, so the two of them get fancy and crash Vandal’s party, using Blake as their in. By all means, LoT, keep coming up with these vague reasons for Sara to get dolled up, because I adore it. After a bit of mission-mandated dancing, they knock out the guards and find Carter’s body. It’s all very James Bond, except Sara is Bond and Rip is one of the really useless Bond girls, like Dr. Christmas Jones.

Of course, before they get anywhere with dead Carter, Savage’s men show up with Blake and take them captive, where they’re forced to watch Savage feed Carter’s blood to his disciples in order to stretch their natural lifespans by a few years. This explains a bit why all his people are so creepy. It’s like Immortality Lite, and I guess it makes them a little weird in the head. There’s really no excusing the off-putting way Blake kept hissing “kariiiiib” at Rip.

Thanks to Kendra’s unexplained but highly convenient psychic connection to Vandal and Carter’s corpse, the rest of the crew manages to sync up and crash Savage’s party, rescuing Sara and Rip. Rip gives killing Savage another go, though he knows it’s useless, and on top of that, he accidentally relates to 1975 Savage the names of two of his 2116 victims – Rip’s wife and son. Nice going, Captain Doofus! Sara, at least, learned her lesson and tempered her blood lust – stabbing around Blake’s head instead of, you know, into it.

The group escapes, retreating to the ship to download, regroup, and sing Kumbaya re: how they won’t abandon one another and are stronger as a team. Right before setting course for the 1980s (finally) the group buries the bodies of Aldus Boardman and Carter.
We’re only three episodes in, but this show is clearly all about the pairings of its characters. Some spark, making for a great subplot; others, not so much. The greatest team-up so far has hands-down been Sara-Snart earlier in the season. This week’s Sara-Rip is a close second, but the accompanying Ray/Prof. Stein subplot is painfully boring and eats up far too much of an already-lacking episode. Luckily, Sara and Snart, the best characters of the series by a landslide, get ample focus. That is the saving grace of the quite dull “Blood Ties.”

Caralynn Lippo is a freelance writer from Brooklyn, honorary resident of Sunnydale. Follow her on Twitter: @caralynn_marie. 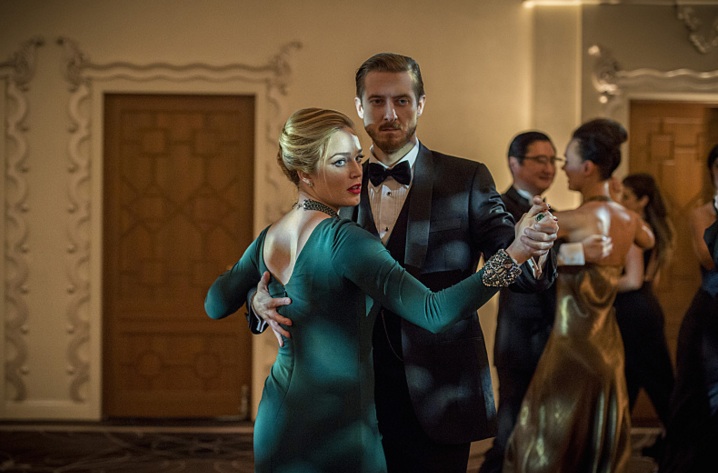