Mayor Bill de Blasio told an audience in Brooklyn tonight that he sympathized with their anxieties over rising tax bills—but said he had no solutions.

Speaking to attendees of a town hall in Bay Ridge, Mr. de Blasio acknowledged that tax assessments in the city had spiked with increasing property values, even though the property tax rate has remained the same. Several residents of the neighborhood, which has many single-family homeowners, complained of the unwieldy burdens placed on their homes—a complaint the mayor said he understood, as the owner of two properties in Park Slope.

“We need serious overhaul of our property tax system,” he declared.

The state controls almost every aspect of the city’s tax structure, with the city only controlling the overall tax rate and the annual assessments. The mayor said he was unsure how to fix the issue.

“We have to do something very big to rethink our property tax system in this city. But it is a very big piece of work,” he warned. “I don’t have that answer today, I’m not going to lie to you.”

The oft-maligned local levy system recognizes four classes of property, which roughly break down into low-rise residential, higher-rise residential, property used for utilities and commercial/industrial parcels. Observers have long complained that condominiums, which are taxed for their rental value rather than potential sale price, are under-assessed—while commercial properties bear a disproportionate percentage of the tax burden.

Taxes on low-rise residential properties can only increase by six percent a year, which allows landlords in high-price neighborhoods like Park Slope to pay a relatively small fraction of their buildings’ rapidly increasing value. The mayor seemed to acknowledge these critiques tonight, and said he was “committed” to spend “months and months” on the problem.

Tonight’s event marked Mr. de Blasio’s first town hall in a neighborhood that went for his 2013 rival, Joseph Lhota. Past town halls have been in friendlier areas like Jackson Heights, Queens and Washington Heights in Manhattan.

Local Councilman Vincent Gentile, who moderated the forum, is a Democrat and de Blasio ally. But the area has for years been a conservative stronghold, with New York City’s only Republican congressman, Daniel Donovan, representing it in the House and GOP State Senator Martin Golden serving as its voice in the State Legislature.

Mr. Golden has backed a measure in Albany that would extend the state’s two percent property tax cap, which applies to all localities outside of New York City, to the five boroughs. Mr. de Blasio has opposed that measure, arguing that it grants the city a vital emergency tool in the event of a natural disaster or financial crisis.

He pledged tonight, however, to not take any such action.

“The thing I am committed to do is not allow an increase in the overall property tax rate,” he said. 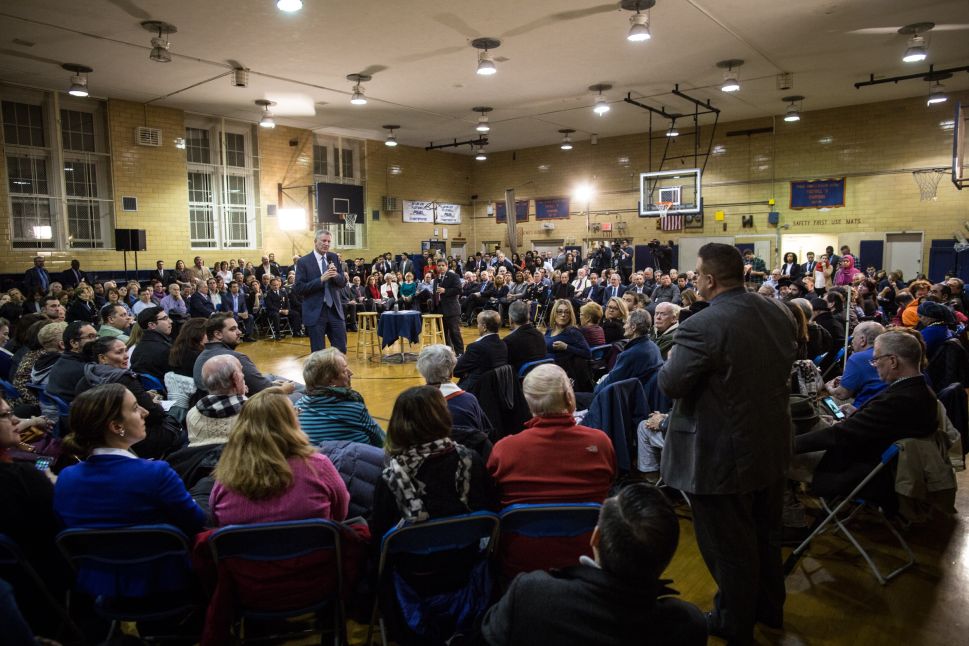