Mayor Bill de Blasio’s plan to corral the city’s horse-carriages into Central Park is headed to the glue factory, after the union representing the drivers announced today it no longer backed the proposal.

The mayor has repeatedly emphasized that the Teamsters helped wrangle out the details of the plan, which would end the long-standing horse run between the park and the West Side stables. It would also thin the herd from 220 horses to just 95, eliminate 40 to 50 driver jobs, spend $25 million converting a maintenance shed into a new set of stalls and eliminate competition by restricting pedicabs to the area north of 85th Street in the park.

But today, everything changed—and the vote scheduled for tomorrow is off.

“The Teamsters’ first priority is always our members and their livelihoods. With the legislation now finalized, our members are not confident that it provides a viable future for their industry,” said Teamsters Joint Council 16 President George Miranda. “We cannot support the horse carriage bill currently before the City Council.”

It is unclear what caused Mr. Miranda to switch stances. The arrangement had many detractors, including a large number of carriage drivers and some other labor unions.

The New York Times reported earlier this week that there were several promises to the union not included in the final draft of the bill, including stands visitors would see immediately on entering the park, and promotional work by NYC & Company

The arrangement appeared unpopular in the City Council, even though Speaker Melissa Mark-Viverito helped negotiate it. Council members mocked the plan and Mr. de Blasio’s staff at a hearing last month, and one councilman bucked the speaker and called for delaying the vote scheduled for tomorrow pending the completion of a study.

Congressman Joseph Crowley, chairman of the Queens County Democratic Party, has also announced his opposition—meaning many representatives from that borough would vote against the measure.

The mayor expressed disappointment and anger toward the union—arguing the deal hadn’t changed—and vowed this would not be his last rodeo.

“We negotiated in good faith with the City Council and the Teamsters to reach this agreement. The terms of that agreement have not changed during these past weeks, but today the Teamsters decided to back away from the fair compromise they had previously endorsed,” said the mayor. “The people of this city know what I believe, and we will work toward a new path on this issue.”

Ms. Mark-Viverito echoed his remarks in the joint statement the mayor’s office sent out.

“Intro. 573-B was negotiated in good faith and was contingent on an agreement between the Administration, the Teamsters and the City Council,” she said. “The Council will not vote on any horse carriage related legislation on Friday since the Teamsters no longer support the deal.”

Mr. de Blasio pledged to abolish the equestrian carts “on day one” of his administration while running for mayor in 2013. Anti-carriage group New Yorkers for Clean, Livable and Safe Streets invested heavily in ads and a ground campaign attacking his main opponent, former Council Speaker Christine Quinn. 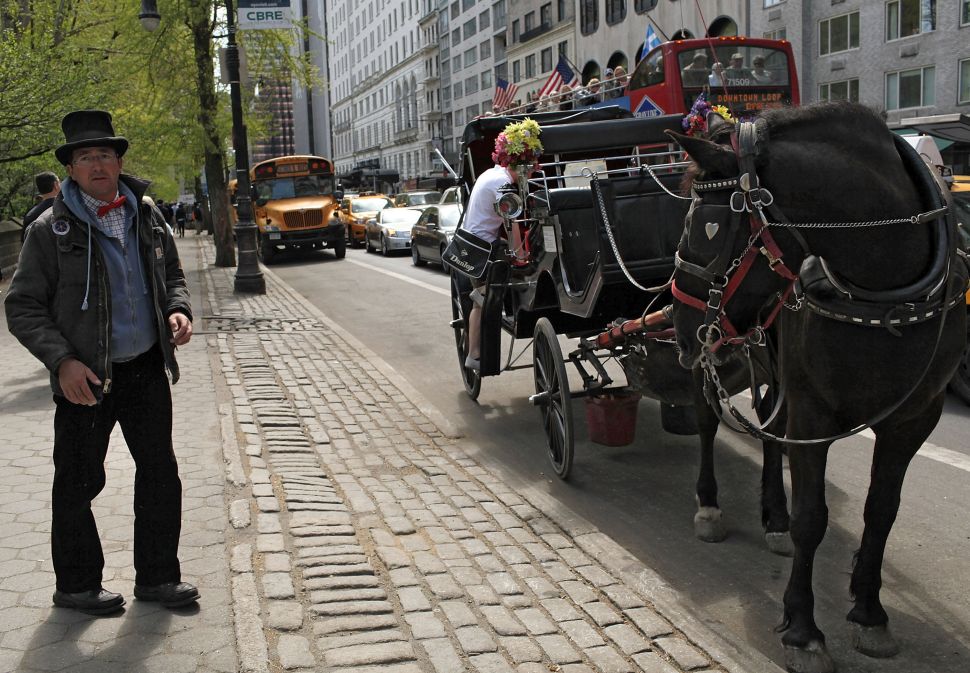