Nostalgia (noun): A wistful or excessively sentimental yearning for return to or of some past period or irrecoverable condition.

Nothing on TV in a long time made me sad the way Netflix’s Fuller House made me sad. Here’s why:

When I was a senior in high school in 2010, a guy from the grade above me, let’s call him “Steve,” came back randomly one day to visit his old high school stomping grounds. And it was cool, man. When Steve was a senior just one year prior, he was the man. An athlete, a pretty good student, involved. So when he came back, he was slapping high fives, hugging teachers, aweing students with descriptions of a far-off land called “college.” A real pleasant, natural surprise. And then Steve came back to visit again a week later, and there were noticeably less high fives and more side-glances than hugs from the teachers. Over the entire year, Steve came back from college to visit his old high school more than five times, each successive time resulting in more uncomfortable whispers. “Shouldn’t he, like, stay at college?” And Steve, you could even notice the change in his smile, each and every visit. It became desperate. Sad. It was the smile of someone returning to the place they were happiest, and finding it had moved on just fine without him.

Fuller House arrived on Netflix today just like Steve, all smiles and hugs and big, winking remember me‘s? Bob Saget’s Danny Tanner returns, as does John Stamos and Dave Coulier’s Uncles Jesse and Joey. The Tanner kids are all grown up with kids of their own, but you’ll learn everyone’s respective new backstory’s through an excruciating opening scene of the first episode, in which each character enters the set one-by-one to give stilted exposition to the tune of the disembodied, pre-recorded applause of an audience that, for all we know, died years ago. This show is somehow both obsessed with catching you up and keeping you as firmly planted in the early 1990s as possible. Inside jokes, references to the original Full House, and totally meta jabs at how super old everyone is make up roughly 90% of the dialogue. And when Fuller House gets nervous that you, the viewer, might not be able to parse through all this subtly it just goes ahead and shows you what’s being offered here.

Fuller House is just the latest in the nostalgia TV trend. You miss Arrested Development? Blam, here’s a new season. Pissed that The X-Files only got nine seasons and two movies? FOX is here with 6 more episodes (and possibly more). Couldn’t possibly live your life with just the episodes of Entourage on HBO GO? Here’s a movie with the whole gang. Scrubs, 24, Prison Break, Veronica Mars, you bet that if something enjoyed moderate-to-great success in the past, there’s a network or studio out there willing to bring it back.

The problem, as Fuller House personifies completely, is that nostalgia does not equal need. The whole point of nostalgia isn’t just straight longing, it’s longing for something you know won’t ever be the same again. There’s a reason you can feel nostalgic about high school AND dread your ten-year reunion. People grow up. Audiences grow up. And growing up involves a ton of change. Maybe you originally watched Full House at an age where problems, serious problems, could be fixed with a hug. Maybe you were obsessed with The X-Files before the internet showed us way more people actually DID believe in conspiracy theories than we thought. Maybe Arrested Development wasn’t special just because of the name, but because the cast had not yet (deservedly) blown up into stardom and could actually appear in a scene, and interact, more than two at a time. And maybe, just maybe, before TV became a playground for master storytellers you were totally fine with a show like Entourage having absolutely zero stakes.

But look what happens when we grow, but those shows don’t. Watching Fuller House is the same thing as opening the world’s saddest time capsule. Arrested Development season four may as well have been Ron Howard reading a book on tape, and the Entourage movie had more celebrities making cameos than it did people buying tickets. And the latest X-Files? In the only worthwhile episode, Mulder spent most of the runtime convinced he is a relic of the past. Maybe he was right.

That’s the thing: shows can be brought back! But they can’t be a Steve. They can’t show up pretending nothing has changed, and everyone is going to be happy just to be here. Look at Starz’s Ash vs. Evil Dead, which did something incredibly brave. It took a franchise that, for three films, balanced completely on the shoulders of a single character (Bruce Campbell’s Ash Williams), and gave that character a supporting cast. Or look at Netflix’s Wet Hot American Summer: First Day at Camp, which took the audience’s memory of the original Wet Hot American Summer and turned it into the point. It didn’t wink and ask “remember me?” It laughed and said “You DO remember me. Now let’s fuck all that up.” Both these stories worked because they did so much more than look backward. That’s what TV nostalgia for nostalgia’s sake is doing. It’s dragging us into a past we thought we wanted, but definitely don’t need.

There’s a moment early on in Fuller House when Danny explains why Michelle Tanner isn’t joining in on the fun. “Well, Michelle sends her love, but she’s busy in New York running her fashion empire.” And then the entire cast look at the camera for a full ten seconds. I’m shocked a trombone wompppp-wompppp noise didn’t happen.

This moment encapsulates all that is wrong with nostalgia TV. Not only does it scream “Look, we did this FOR YOU,” but it inadvertently draws attention to how useless this all is. Fuller House makes sure you know that Michelle Tanner, the fucking toddler in the original series, was the only one to really grow up. 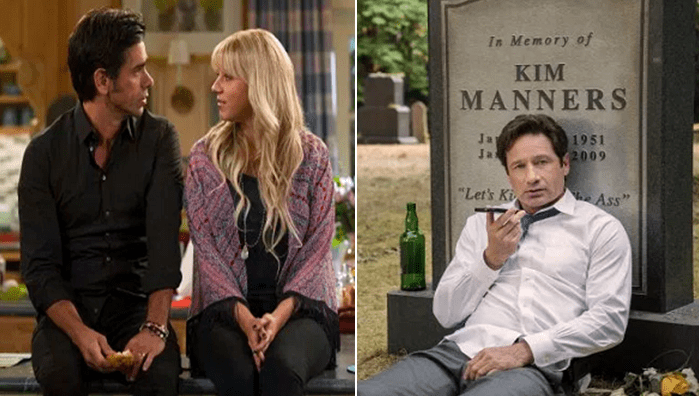