Mr. Sanders viewed the debate as an opportunity to champion his causes of great change and taking America back from powerful and wealthy individuals and interest groups and the oceans of money they use to buy and corrupt our democracy.

Ms. Clinton used the debate as little more than an opportunity to use her debate performance as an oppo research-style attack against Mr. Sanders.

I appeared on the Canadian version of the Today Show on Thursday morning and was asked why Mr. Sanders has such great appeal to young people and other voters, and why Ms. Clinton has fallen short in her campaign.

Mr. Sanders offers clear and powerful plans for change with authenticity and passion.

My main point was that at a time when most voters are hostile towards political and financial establishments and believe that most politicians are not honest with them, Mr. Sanders offers clear and powerful plans for change with authenticity and passion, while Ms. Clinton has campaigned as the candidate of the establishment and has generated high levels of public distrust of her.

From the beginning of the Thursday debate until the end Ms. Clinton went on the attack against the dreams of Mr. Sanders, which will do nothing to address her high levels of distrust from voters, without any serious attempt to discuss her own hopes, dreams and aspirations that motivate her to run for president.

For example Mr. Sanders has championed a healthcare reform proposal based on a single payer system which he calls Medicare for All. Most Democrats and probably a majority of all voters agree with this. Every democratic nation in the world   except the United States has adopted some form of single-payer healthcare. Their people support it. While progressive political leaders have historically led the fight for single payer healthcare throughout the democratic world, now that it has been so widely adopted that even conservative leaders in these many countries accept it.

Throughout the campaign, and again during the Thursday debate, Ms. Clinton ridiculed Mr. Sanders and the majority of Democrats who support single payer healthcare. Rather than stating that ObamaCare made things better but Democrats should battle for the next great era of change, she clung to ObamaCare tightly with both hands and sounded as though she seeks little more than to serve the third term of President Obama.

In effect Mr. Sanders is taking the position consistent with both liberals and conservatives throughout democratic nations who have successfully created single payer healthcare, while Ms. Clinton is saying they are all wrong and she is actually to the right of even conservative leaders, as well as liberals leaders, around the world on this issue.

Mr. Sanders is calling for free public college education and financing his plan through a transaction tax on Wall Street speculators, which would raise substantial money because of high volume, high intensity, computer generated Wall Street speculative trades and other factors.

When Ms. Clinton ridicules this idea, and suggests Mr. Sanders is giving education away for free, first he pays for this program by taxes on Wall Street that Ms. Clinton is reluctant to support and second, on the matter of giving things away for free, Ms. Clinton would be better advised to talk about major global conglomerates who find ways to pay little or no taxes.

It is no coincidence that the front page of Friday’s Wall Street Journal reports Ms. Clinton’s general tone in her private speeches to big banks whose transcripts she has so far refused to disclose. According to this report she did not insist that these banks take responsibility for the great financial crisis but instead, she reportedly told the bankers “we are all in this together.”   When Mr. Sanders uses these words he means something entirely different!

When Ms. Clinton condescendingly called Mr. Sanders a one-issue candidate, she is wrong and she knows it. When Mr. Sanders calls for income equality and for ending the corrupting power of big money special interests, he is raising an issue that affects all issues. Mr. Sanders is perfectly right when he says that oil company money not only pollutes our politics, it pollutes our environment.

When Mr. Sanders says Big Pharma spreads money around in Washington, it not only corrupts our politics, it leads to increases in healthcare costs.

Instead of discussing the dreams she has for America, she spent her time attacking the dreams of Mr. Sanders and the men—and women—who share those dreams and support them, and him.

When Ms. Clinton says that Mr. Sanders is a one-issue candidate that is a falsehood written by spinmeisters and the kind of bogus charge that makes her so distrusted by so many voters.

I would have hoped that Ms. Clinton’s debate performance had shown that she understood why Mr. Sanders did so well, and why she did so poorly, in the New Hampshire primary. Instead of discussing the dreams she has for America, she spent her time attacking the dreams of Mr. Sanders and the men—and women—who share those dreams and support them, and him. 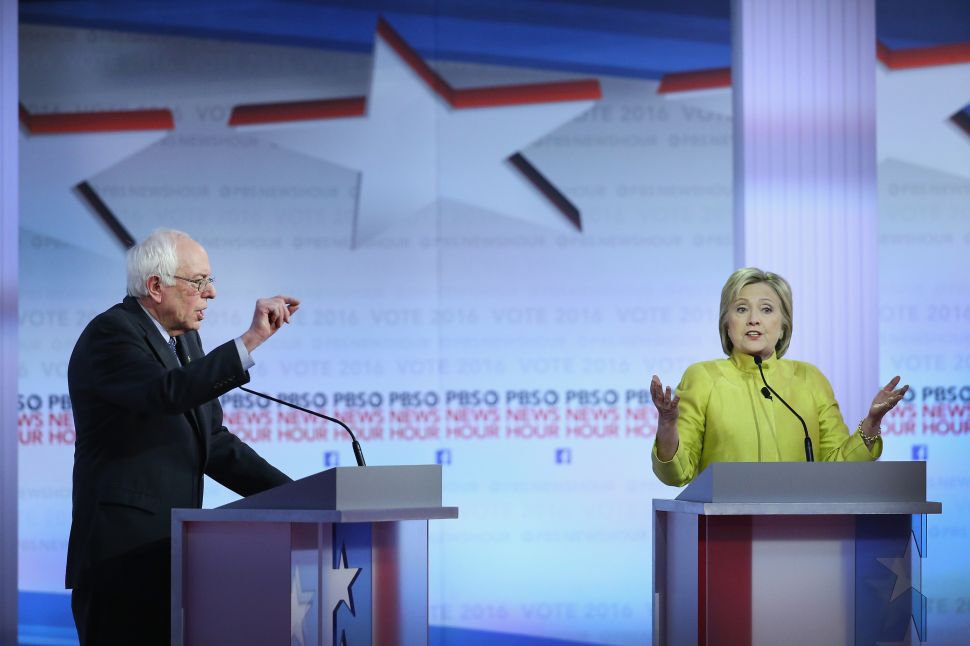