If Republicans expect to stop Donald Trump from barreling his way to the nomination and upending the GOP as they know it, they will need to keep the billionaire real estate developer from winning Ohio and Florida on March 15.

Both states promise significant delegate hauls. The winner will take home all of them, no matter his margin of victory.

For the Republican establishment to derail Mr. Trump, winner of three of the first four states to vote, they need to winnow the field as quickly as possible, and two candidates believe wholeheartedly they can win their home states: Sen. Marco Rubio of Florida and Gov. John Kasich of Ohio. Until then, neither will likely drop out.

The Republican establishment has clearly decided on Mr. Rubio, with numerous governors, senators and members of Congress hopping on board his campaign. But Mr. Rubio is polling badly behind Mr. Trump in Florida, while Mr. Kasich slightly trails the New York billionaire in Ohio. Thanks to absentee balloting, Florida voting has already begun.

If Mr. Kasich wins the state he governs, and Mr. Rubio loses the state he represents in Congress, GOP power brokers will have gambled and lost with the 44-year-old freshman senator.

“We are gonna win Ohio,” John Weaver, Mr. Kasich’s top strategist, told the Observer. “Here’s the thing: the Rubio campaign, and really his whole political career, is like a movie set. There’s nothing real there.”

“If you can’t win your home state,” he added, “you can’t move forward. If we couldn’t win Ohio, I wouldn’t try to spin the press on our chances.”

Real or not, Mr. Rubio finished ahead of Mr. Kasich in three out of four states, though the Ohio governor came in second in New Hampshire, allowing him to continue onward. For a long time, Mr. Rubio looked like a safe bet to contest Mr. Trump all the way: he is conservative enough to appeal to primary voters and could compete in bigger, more liberal states in a way another rival, Sen. Ted Cruz of Texas, may not. He is articulate, handsome and, with the exception of one major stumble, strong in televised debates.

Mr. Kasich, on the other hand, is a soft-spoken conservative seemingly unfit for the furious, populist mood of 2016. Tea Party voters hate him for expanding Medicaid in Ohio. Most political observers expect him to get crushed on March 1 when a host of Southern states go to the polls.

But Mr. Kasich has kept plodding along, and is hoping to carve a path to victory with a strong showing in Michigan on March 8. Other states like Massachusetts, Vermont and Mississippi are in the Kasich camp’s sights. An Ohio win would be critical, and set Mr. Kasich up to fight Mr. Trump in other delegate-rich states where his moderate brand could sell. New York, which votes April 19, would be on that list.

Suddenly, as RealClearPolitics recently pointed out, Mr. Kasich would become a viable alternative to Mr. Trump.

Mr. Weaver argued that Mr. Rubio being “crowned” the “insider” candidate would be bad for him, anyway, given the volatile political climate.

“If we win Ohio and he can’t dramatically reverse what happens in Florida, it’ll be a two-horse race,” he predicted. “I don’t know why you’d want to be the insider candidate in this cycle.”

Mr. Rubio has mostly refrained from attacking Mr. Kasich, saving his fire for Mr. Cruz and occasionally Mr. Trump. That could potentially change when the candidates debate tonight in Houston, though Mr. Trump is expected to be targeted. 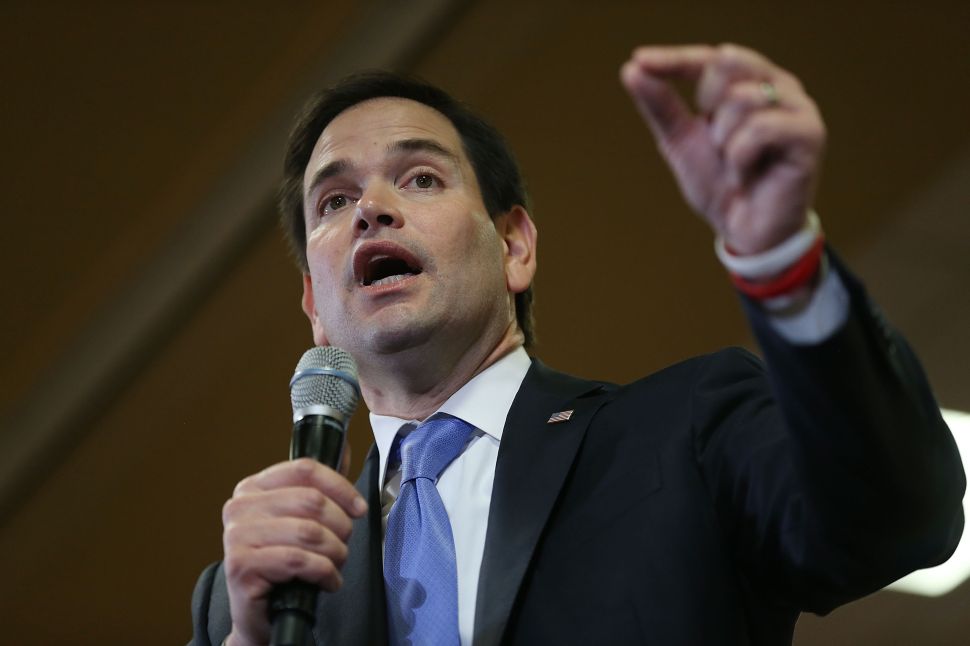