Not your average kid’s show, Disney animated series Miles from Tomorrowland features an intergalactic family who live in outer space and complete missions — including repairing broken spacecraft, mapping undiscovered areas of the solar system and developing space highways — all in an effort to discover new planets and connect the universe.

The series is the brainchild of Sascha Paladino, who has previously worked on Doc McStuffins, Blue’s Clues and Sid the Science Guy.

An ardent fan of Star Wars, Star Trek and the classic sci-fi novel, The Hitchhiker’s Guide to the Galaxy, the idea for an intergalactic adventure seems like a natural one to have come from Paladino, but it took an unlikely nudge to actually get him to the fully formed idea. “I’ve always been interested in space, but I wasn’t sure how to incorporate that into a series for kids,” he admits. “Then I found out I was going to be father of twins and truthfully, I freaked out a little. I had this thought that I was never going to have another adventure again. So I started thinking to myself, ‘what’s the best adventure you could have with your family?’ In an interesting twist, as I was thinking about that and just after my sons were born, I was asked to move to Ireland, so there I was with my family in an unfamiliar place, exploring and learning new things and that’s when I came up with this idea about a family living in and discovering all these elements of space.”

The family at the core of the series, the Callistos, is a progressive bunch, in many ways, says Paladino. “I always intended for the mom to be the captain of the ship because I’ve always seen moms as the captain of the family, but along those same lines, I felt it was very important that the dad wasn’t a ‘doofus’ type and just the comic relief. You see that a lot – when the mom is in charge it’s because the dad is inept – and I think that’s really inaccurate so I wanted to show that mom is in charge here but dad has an important role as well and that they complement each other.”

To assure that the science part of the series is accurate; Miles employs consultants from the Jet Propulsion Laboratory (JPL), NASA, and the Space Tourism Society. Finding the balance between having enough science in the show but not so much that it’s overwhelming is something that Paladino says is really not the struggle one might expect. “We want cool gadgets and everything, but our starting point for every story is what’s happening in the family, what are they going through today? Once we have that emotional core worked out then we consult with our science consultants to craft the narrative.”  Paladino gives an example saying, “We had a story about an out-of-control space shuttle and we needed it to be hurtling toward something perilous. Dr. Randii [Wesson, from JPL] said ‘How about using io, which is one of the moons of Jupiter? It’s full of lava spewing volcanoes.’ So, it all starts with the heart of the story and then the science stuff comes in and adds to that.”

Paladino is quick to admit that on Miles the narrative equation contains both factual components as well as made-up elements. “We like to have both science fact and science fiction in the mixture. We have episodes about real planets and moons but we do create our own planets because our scientists say that fantastical things like that can inspire kids to use their own imagination in new ways.”

Miles from Tomorrowland features some big name voice talent, including Mark Hamill, who played Luke Skywalker in the original Star Wars series, as well as George Takei and Wil Wheaton of Star Trek fame. “I love that we have DNA from both series. Having these guys on the show has really boosted our sci-fi geek cred and we love that,” says Paladino with some exuberance. “We’re going to continue to reach out to more of the actors from those series as well.”

As for the future of the Miles, Paladino reveals, “We have a specific trajectory in mind. We have more planets to go to, just a lot more to explore. We’ll be introducing a school that’s really unique. It’s unique because in this school, the galaxy is your laboratory. What we’re trying to do is make the most of the idea of living in outer space and every extension of that.”

Paladino is understandably proud of the issues he’s able to introduce via the series. As an example he points to an episode about space junk. “The story was about this planet and how all of this stuff floating around was blocking the planet from getting energy. It was a great way to talk about the problems we have on our planet with pollution.”

The responsibility of producing meaningful content is not lost on Paladino as he says, “I lot of people think that kids’ shows are quickly written and produced and are just for fun, but the truth is there’s a lot that goes into making the episodes. I know that millions of kids are watching this and that whatever they watch shapes their brains. I mean, I still remember things that I saw on TV as a kid. These things have real impact so I take this seriously and aspire to really make quality TV. My goal with the show is to move the needle on these issues and keep kids’ eyes open about this kind of stuff. I may be doing it in a sort of covert manner, but I think it’s having the desired impact and I’m really happy about that.” 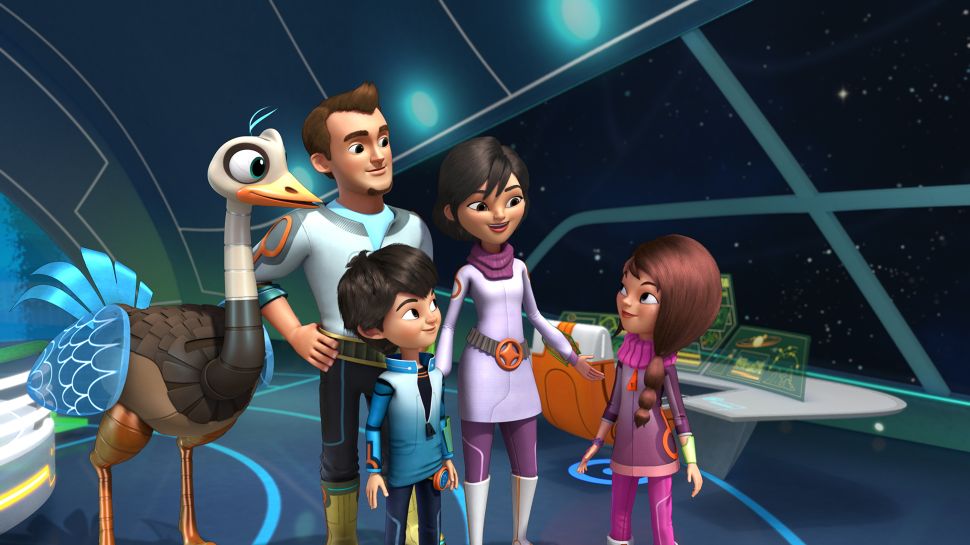