Donald Trump did his best to confirm the worst fears of his most history-minded critics when he retweeted a quote from Benito Mussolini this weekend. There are no shortage of think pieces accusing Mr. Trump, a billionaire real estate developer, of peddling in fascism or embodying a rise in authoritarianism that is already sweeping other parts of the globe. Playing the role of charismatic and incendiary strongman, Mr. Trump does himself no favors, threatening to single-handedly rewrite libel laws, bar an entire religion from immigrating to America and kill the families of ISIS members.

Some political scientists have even concluded that the voters supporting Mr. Trump, now the Republican front-runner for the nomination, have authoritarian impulses. Another commentator likened him to Buzz Windrip, the populist senator who brings fascism to America in Sinclair Lewis’ 1935 novel It Can’t Happen Here.

Yet there’s a bitter irony to writing Mr. Trump off as buffoonish fascist threatening to demolish our democracy: this is, in fact, what democracy looks like.

Mr. Trump—thanks to a healthy dose of free media, his formidable political talents and ability to innately understand what resonates most with furious Republican voters—has been able to lay waste to an anti-democratic party power structure that for decades successfully scuttled candidates who couldn’t or wouldn’t pledge fealty to elite donors and elected officials. As vulgar and brutish as he often is, he has also temporarily thwarted efforts by think tanks, super PACs and supposed nonprofits to determine the character of American democracy and torpedo candidates who dare to veer away, even gently, from the party line.

This was crystallized in a recent New York Times report that detailed how the Republican Party has scrambled and failed to derail Mr. Trump, who has no allegiance to their political orthodoxies and threatens to alienate general election voters with his racial appeals and growing popularity with white supremacists. Taken from one perspective, the story of 2016 has been how white knights in the GOP have tried to desperately defeat the vile Mr. Trump, hoping somehow that a civil, more traditional candidate eventually restores order and stops the madness. There’s no shortage of laments from the people who advised Mitt Romney, John McCain and other Republican stalwarts, and nostalgia for the way things use to be, when the greatest controversies of the campaign season were Mr. Romney’s car elevator and the wacky preacher at Barack Obama’s church.

Consider, though, how presidential primary politics have played out over the last century. Before the advent of the modern primary in the 1970s, someone like Mr. Trump would not have sniffed the presidency because the delegates and party bosses who determined the nominee would have taken one look, laughed and walked away. Mass rallies of the kind now whipped up by the celebrity billionaire and Sen. Bernie Sanders of Vermont on the Democratic side wouldn’t have made a lick of difference. Go back to 1952, when Sen. Estes Kefauver of Tennessee, a Democrat, ran for president against incumbent President Harry Truman and Illinois Gov. Adlai Stevenson; despite winning almost every single primary he contested, Kefauver had no chance at the national convention because the delegates who nominated the president didn’t care about the primaries at all. Party bosses preferred Stevenson and he’d go on to lose to Republican Dwight Eisenhower.

When primaries began to matter 20 years later, presidential elections became more democratic, allowing insurgents on both sides of the aisle to occasionally defy the political establishment and win. But even the most famous come-from-behind candidates, including Mr. Obama and Jimmy Carter, needed to ensure party gatekeepers were not universally aligned against them to succeed. The GOP has been especially adept in recent years of snuffing out troublesome outsiders, coalescing quickly behind well-funded nominees to crush the likes of Rick Santorum and Pat Buchanan, who presaged the working class, nativist rage now fueling Mr. Trump’s success.

“Despite all the forces arrayed against Mr. Trump … the [Republican] party has been gripped by a nearly incapacitating leadership vacuum and a paralytic sense of indecision and despair,” the Times reported in their story about GOP tumult.

The phrase “leadership vacuum” is telling. As Nate Silver wrote last month, the Republican Party elites are “failing” because they cannot defeat Mr. Trump, which would be in their best interests. There has been no single influential person, or a cadre of far-seeing power brokers, to call the shots and clear the field so one candidate can stand up to Mr. Trump. Mr. Romney, the former Massachusetts governor and 2012 nominee, comes closest to the idea of an elder statesman in the traditional sense of presidential politics as we once knew them: a well-heeled someone, though no longer accountable to anyone, helping to determine the outcome of an election.

In a less democratic world, Mr. Romney’s reported request (or demand?) to Gov. John Kasich of Ohio to drop out of the race so the chosen son of the establishment, Sen. Marco Rubio of Florida, can zoom to victory would have succeeded. Mr. Kasich, who has his own modest base of support, would have listened to a multimillionaire former governor and exited stage right. A competent, centralized (or authoritarian?) party power structure would have successfully told Republican voters in New Hampshire, South Carolina, Nevada and elsewhere what to care about and whom to vote for.

They tried, after all. Even though the Tea Party, grassroots Republicans, the ones actually showing up in the midterms to hand the GOP their greatest House majority in generations, made it clear they hated the idea of illegal (or legal) immigration, Reince Preibus, the chairman of the Republican National Committee, called for his party to embrace immigration reform after the 2012 election. Why? Well, top elected officials and donors liked the idea. It sounded nice. It had nothing to do with raising taxes or adding entitlements. In theory, it would be a boon to the Republican Party in the general election, assuming they could successfully control who got there, as they tried to do by rejiggering the primary calendar.

Mr. Trump’s surge has no historical precedent. In an era of increasingly long primary seasons, the media and political class were supposed to know who the top presidential contenders would be a year or so before the Iowa caucuses. These are the candidates who have submitted themselves to the so-called invisible primary, wooing donors, assembling sophisticated campaign apparatuses, employing profile-worthy political operatives and tweaking their “messages” to conform to a set of ideas and principles held by the political party while satisfying voters.

Instead of a more traditional primary process, which we are seeing on the Democratic side, the Republicans encountered something very alien and eventually terrifying. Their vetted candidates, various winners of the invisible primaries, are failing. Sen. Ted Cruz of Texas, an insider-turned-outsider, won Iowa. Jeb Bush, the living embodiment of the Republican establishment, won nowhere. And Mr. Trump, a king of reality television, a medium that embodies the perverse democratic ethos that anyone can be a star, stole the show and never gave it back.

Yet another irony of this political season is that Republicans, even those most staunchly in the anti-Trump camp, can rightly say their combustible primary has more resembled what happens in a competitive democracy. Hillary Clinton boxed out most of her potential rivals years ago, locking up donors, elected officials and campaign operatives to such a degree that even the sitting vice president couldn’t challenge her. Was there a mass call among the Democratic hoi polloi for Ms. Clinton? Or did a diminished Democratic bench, along with the backroom strength of a Clinton dynasty, deny voters the menu of choices they may have or should have expected?

The Trump analog on the Democratic side is Mr. Sanders, who probably cannot pull off the same trick as Mr. Trump due to his own limitations (Vermont, socialism, age) and the unified strength of a Democratic establishment that wants him to fail. The supposedly neutral Democratic National Committee won’t be responsible for Ms. Clinton’s win (that’s too simplistic a takeaway) but they will be remembered for severely curtailing the number of televised debates and staging them at bizarre times.

As revolting as many progressives and textbook conservatives find Mr. Trump, they must contend with the very real fact that this is who more and more (mostly white) Americans want. Alienated and resentful of politicians and parties who haven’t made their lives any better, they’re turning to a man who claims he can do just that, and do it quickly. They don’t care that he won’t disavow the KKK fast enough. They aren’t turned off by his defenses of Planned Parenthood and government-run healthcare. They have no reason to believe the Trans-Pacific Partnership, the sprawling trade deal Ms. Clinton once championed, will get them a raise next year or reopen the factory in town that was shut down 20 years ago.

This doesn’t necessarily mean we should expect uprisings like these in all presidential cycles going forward. Mr. Trump, with his gargantuan celebrity and wealth, is a singular figure, unusually adept at commanding attention every single day. His blueprint is not easily followed.

There is some irony in calling the presidential bid of a multibillionaire “democratic,” and we know fairly democratic systems have produced fascists before. But after overcoming the Founding Fathers’ initial preference for white male property-owners voting for a president vetted by state electors, we’ve arrived at a moment when large numbers of actual people can come together and decide who they want to be president of the United States, regardless of the wishes of a political party.

That is, for better or worse, what democracy looks like. 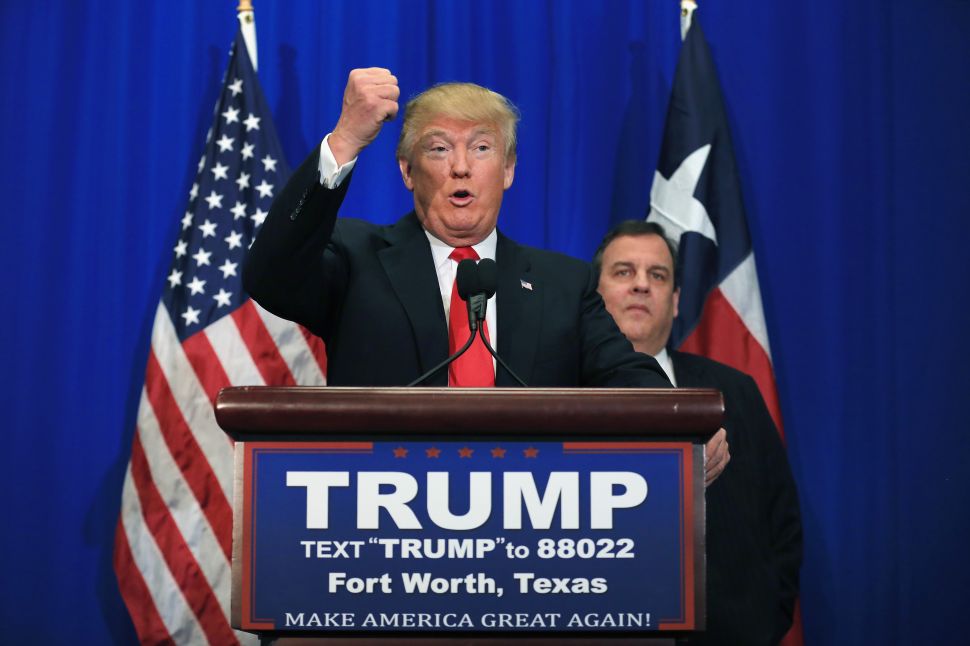