The marriage of Mary Crawley and Henry Talbot was not a shotgun wedding, but had the cameras had pivoted just slightly to the side, it felt as if they’d reveal a phalanx of heavily armed men making sure events went according to script nevertheless. The climax of Downton Abbey’s penultimate episode (technically the season finale in the UK) had the hurried vibe of a hostage tape, with hardly five minutes elapsing between proposal and nuptials. In between was one brief interlude of the senior Crawleys visiting Mrs. Patmore’s bed and breakfast; the ceremony followed so quickly that it seemed they simply stopped by the church on their way home. After building to Mary’s first wedding for two full seasons, wedding number two got just two short scenes. Everyone involved seemed to want it over with as soon as possible.

Really, can you blame them? There’s a Henry-shaped hole where a husband should be. To this day we know nothing about the new Mr. Mary other than the facts Mary, Tom, and Henry himself, among countless other characters, perpetually assert. He’s handsome, he’s headstrong, he has no money or position, he likes to race cars, he loves Mary, Mary loves him: This isn’t a character, it’s a Wikipedia stub. Forcing everyone on the show to say they’re perfect for each other doesn’t make it so, particularly when the little we do know of what seems to make him tick—he won’t accept Mary’s no for an answer (“Nobody can believe that I know my own mind,” she says at one point, quite justifiably and depressingly), he’s passionate about a sport that triggers PTSD in his beloved and would resent her if he had to quit—indicates the contrary.

Matthew Goode’s performance does Henry no favors either. With the exception of his touching breakdown after the death of his friend in a car crash, he’s stuck on store-brand Young Hugh Grant mode, without the endearingly irritating stammer. His allegedly charming and irresistible character delivers lines like “I’m hot, I’m cold, I can barely breathe, and it’s all because of you” as if reading them from cue cards. Compare this to the quiet, aching intensity of Dan Stevens’s Matthew Crawley the night before his wedding to Mary, when he told her “I would never be happy with anyone else as long as you walked the earth”; the line exploded like an atom bomb of absolute devotion, not some half-assed ode to teenage twitterpation.

Most frustrating of all is the fact that none of this would have been necessary had Julian Fellowes simply spent the past three seasons taking the pieces he already had on hand and building toward their eventual assembly. In other words, it is madness, madness, that Tom and Mary never got together. I mean really, did no one involved with this production see this? Both characters lost their star-crossed spouses to sudden death at tragically young ages—when the actors playing them moved on for greener pastures, that is. In so doing, Dan Stevens and Jessica Brown Findlay gave Fellowes a gift he’d never have gotten had only one of them ankled the show: a symmetrical vacuum the surviving characters could easily, artfully fill. Sure, it would have been tough to swallow at first. But after this season especially, featuring scene after scene depicting Tom and Mary’s abiding friendship and respect—not to mention their explosive argument after she sabotages Edith’s engagement, overflowing with the kind of anger only people who truly love each other can generate—can anyone deny the chemistry was there? Yet the gift went unopened, the chemical reaction uninitiated. Fellowes had years to build them up, but instead we got Tony Gillingham and Miss Bunting and Henry freaking Talbot. Madness. Madness!

And yet! Frustrating though the conclusion to Mary’s completely theoretical grand romance with Henry may have been, it wasn’t enough to ruin what surrounded it: scene after scene of payoff for longstanding storylines, giving a sizeable segment of the cast their best material in literally years. As Mary, Michelle Dockery tops that list. There may be nothing to her and Henry, but there’s everything to how she detonates her sister’s life out of pure spite by revealing her illegitimate child to newly elevated Lord Bertie Pelham before Edith herself could muster the spine. It’s the cruelest thing she’s ever done, and Dockery plays it like Mary’s some kind of horrible wind-up automaton, her actions a foregone conclusion the moment she gets going. Her knockdown dragout with Allen Leech as Tom gives him more heat than he’s had since Sybil’s death: “You’re a coward, Mary,” he says, pegging her attack on Edith to her fear for her own future. “Like all bullies, you’re a coward.”

As Edith, Laura Carmichael gets it even better, in a confrontation with her big sister that’s been brewing since the pilot. When Mary tries, with a lack of conviction that borders on the hilarious, to plead ignorance and insist she thought Edith had already told Bertie the truth, Edith hits Mary’s ability to pull the wool over the eyes of people like Cora and Anna with laser precision. Then comes the coup de grace: “I know you! I know you to be a nasty, jealous, scheming bitch!” When Mary attempts a comeback, Edith repeats it for emphasis: “You’re a bitch!” The line hits like a blow to the head on this genteel show, as it should. Mary’s cruelty to her sister was always the one part of her knowingly frosty nature (“You are the only woman I know who likes to think herself cold and selfish and grand,” as Lady Violet puts it) that was impossible to excuse as an abrasive idiosyncracy. It was shitty, and this was its shittiest manifestation of all. Bravo to the show for allowing them to have it out so directly, and then to make up not out of love, but out of comradeship: “Our shared memories,” Edith foretells, “will mean more than our mutual dislike.”

The fact that Edith’s farewell to Bertie wasn’t entirely overshadowed by her apocalyptic confrontation with Mary speaks volumes on the former scene’s quality, and that of the relationship to which it provides a sad (if, I’m guessing, only temporary) capstone. Bertie is the anti-Henry, a person we saw grow important to Edith through working with her, helping her, holding her, being there for her, not merely climbing out of a car and wafting the stench of sex and derring-do in her direction like a posh Pepe Le Pew. Moreover, his unexpected ascent to the position of marquess, with its echoes of Matthew Crawley’s meteoric rise, made his would-be marriage to Edith a mirror image of his predecessor’s near-mythic romance with Mary. This makes his decision to break off the engagement all the more heartbreaking, especially because everyone, Edith included, understands it as reasonable. He doesn’t jilt her over shock or fear of scandal, but because she didn’t trust him to stay with her in the first place. He’s as sad about this as she is, and it shows. Their final shared shot—Edith with her back to the camera, centered against the Abbey, as Bertie walks away—was one of the show’s most melancholic.

But Thomas Barrow had the heartbreak to top them all. After all these years of hiding and scheming, trying and failing, his will to go on finally gave out. Through his eyes and tone of voice alone, Rob James-Collier made his decision clear long before we saw the result. It’s difficult to shake the shot of his beautiful face, paler than ever against the dark read of the bath into which his slit wrists were pouring blood, when his coworkers find him—not just for the horror of the scene, but because it’s only in that context that he looks at peace. Thomas’s villainy has always had a tragic character; barely villainous at all anymore, only the tragedy remains. So it’s fitting that Mary and her son, one of the kids with whom Thomas has formed a very real bond, are the ones to come and cheer him up. As Mary says, they both know what it’s like to get locked into patterns that push them away from the people they find they truly need. And whatever happens in the finale two weeks from now (I’m guessing Baby Bates and an Edith/Bertie reunion, but I’ve got a final Hugh Bonneville/Brendan Coyle Robert/Bates scene on my wishlist too, mostly because I don’t think there’s been one all season and wonder if there’s Julianna Margulies/Archie Panjabi bad blood going on there), Thomas and Mary are the people I’ll come back to when the show is over. 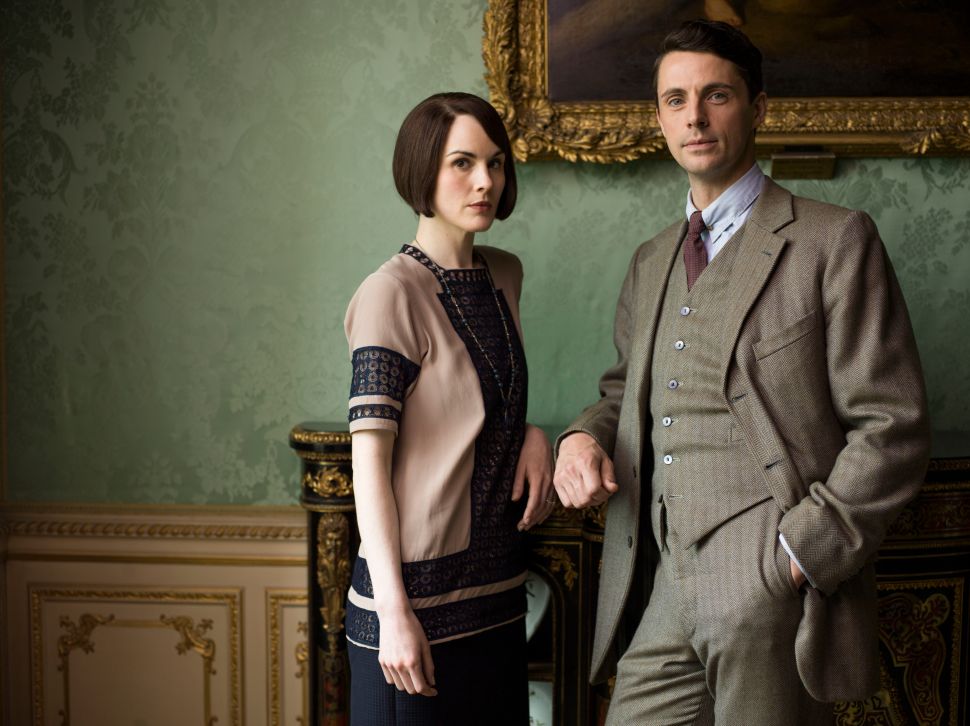