Though neither figure involved would likely approve of the phrase, turning the Dowager Countess into a stand-in for Adolf Hitler is a portrait in chutzpah if ever there was one. The moment it became clear that the Minister of Health whom Lady Violet had cajoled into visiting Downton and bearing the brunt of her rage regarding the proposed hospital merger was none other than Neville Chamberlain, the future architect of appeasement, I laughed more with awe than amusement. It takes a level of devil-may-care showmanship I’ve never even approached to have the Dowager say “When we unleash the dogs of war we must go where they take us” in the same episode she bullies the man behind the Munich agreement, or to have that same guy say “I wouldn’t have the courage to refuse your mother-in-law” given who else he famously lacked the courage to refuse, or to make him say to Tom “how well you understand me” when Branson commiserates about how unpleasant it is to be drawn into fights between other people. Just ask the residents of the Sudentenland! This isn’t the first time the Führer has raised his ugly head on Downton Abbey—he was responsible for the murder of Lady Edith’s babydaddy Michael Gregson during the Beer Hall Putsch, believe it or not—but it’s certainly the first time he was used as an extended point of comparison for Dame Maggie Smith. That’s…that’s really quite something, is all I can say.

But at the risk of reading more into this fifth episode of the show’s final season than may actually be there, I think there’s more to the future Prime Minister’s cameo appearance than a long shaggy-dog joke at his expense. Seated at dinner, stunned into near-silence (like most of the non-participants) by the heated argument between Lady Violet and her opponents on the hospital board, he’s suddenly witness to a ghastly and shocking spectacle: Lord Robert, standing up and vomiting blood all over everything before collapsing in a pool of his own ichor. On a story level, this is the spectacularly disgusting (especially by this show’s sedate standards) payoff to the long-running stomach-pain plotline that’s bedeviled the Earl of Grantham for some time.

But in metaphorical terms, it’s something more. We’ve long been taught in this country that appeasement was primarily the moral failure of Chamberlain, not Hitler, with the former figure repeatedly invoked by hawkish politicians as the model of spineless, naive weakness in the face of foreign intransigence, duplicity, and atrocity. Naive he certainly was, placing far too much faith in his one-man diplomacy with the leader of the Reich than anyone ought to have done. But he was quite in line with the doctrine of the day in every other respect. Conservatives across the continent viewed Nazism and fascism as a bulwark against the greater threat of Bolshevism, for one thing. But more importantly, politicians of nearly every stripe were barely 20 years removed from watching the young men of their country fed in their millions into the pointlessly immoral meat grinder of the Great War. Scarcely any of them could imagine a leader so bloodthirsty, irresponsible, and inhumane not just to risk stumbling into another such conflagration but to actively seek one out—to have planned for it, in one form or another, since the start of his political career, to see it as not just inevitable but desirable and salutary and vital to the future of his nation. This is what Chamberlain faced in Hitler: a conscienceless liar, an unrepentant killer, a warmonger of unprecedented caliber. To sit here in the comfort of the 21st century and believe you too wouldn’t have been taken for a ride by such a person is the height of preening moral decadence.

So here is Chamberlain, dining at Downton as have countless men and women before him—only to face a literal eruption of blood from a human body that no one there had predicted or planned for, except perhaps for the stomach ulcer responsible. Is there something being said here about the experience of the real Chamberlain, who believed he’d secured peace for the people of Europe, when he’d unwittingly handed a monster the knife he needed to slit the world’s throat? There’s more to the episode than this of course—Mary gets wind of Marigold’s true parentage, Edith falls in love while she and her new editor invent the thinkpiece, Tom helps Mary get closer to Henry the racecar driver (while, god willing, getting closer to her himself), Thomas and Andy have their rapprochement, Carson is a dick to Hughes, the adventures of Denker and Spratt continue, etc. But I’ll be thinking of the crimson river bursting out of Lord Robert, and how all Neville Chamberlain could do was watch. 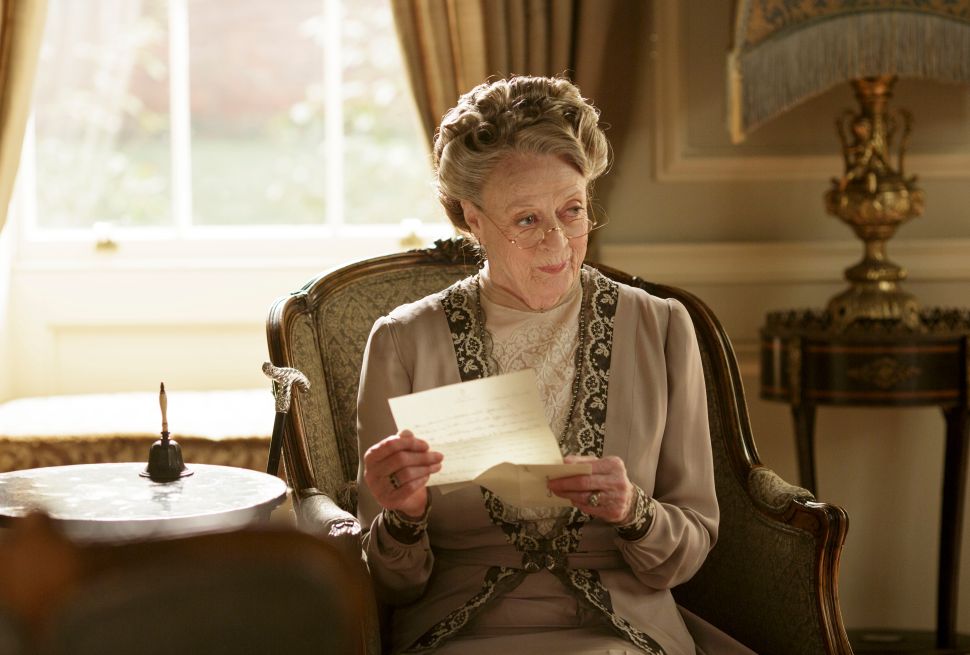