The go-native head-trip drama Embrace of the Serpent is a dazzlingly elegaic reverie about the ravages of colonialism on Amazonian tribes, and one of the five Oscar nominees for 2016’s Best Foreign Language Film.

The Academy doesn’t usually recognize hallucinogenic cinema, so this mainstream nod really speaks to the potency of the film’s themes and the potential accessibility of its mesmerizing style. (A cynical wag might snort that it’s just Hollywood’s way of satisfying its annual quota of white liberal guilt; either way, the wondrously weird movie is getting well-deserved attention.)

The story follows a shaman named Karamakate (played at different ages by Nilbio Torres and Antonio Bolívar Salvador) and toggles between his experiences with two white Westerners: Theo (Jan Bijvoet), a German ethnographer in 1907, and Evan (Brionne Davis), an American botanist in 1940. Both of them are seeking a legendary but scarce plant called the Yakruna, which is held sacred for its healing powers. Theo is gravely ill and needs the plant to survive; Evan, haunted by the fact that he has never dreamed while sleeping, hopes that it will finally cure him.

The chronic tragedy, though, is that the Amazon and its dwindling population have for decades been disrespected, violated, slaughtered and even enslaved by the opportunistic, materialistic colonists who covet the rubber held in their trees totally disregarding the balance of nature. It’s a slow-motion holocaust.

“White men can’t be trusted,” is the justifiable knee-jerk mantra among the locals—not surprising when Karamakate and Theo encounter a one-armed worker, mutilated with scars and desperately trying to scoop up rubber sap from his spilt buckets, who begs for a mercy killing to escape his paleface bosses.

‘The only thing sacred in this jungle is me!’ he cries, literalizing communion by commanding his disciples to eat his flesh.

And as Karamakate takes his two passengers down the river, in two parallel moments in time, unhinged chaos slowly surrounds them.

“This is madness,” one of them says in English (in a film that mixes a half-dozen tribal tongues and European languages), and the double meaning is clear: both insanity and outrage commingle in increasingly surreal forms.

Despite the surrounding lunacy, both Westerners do their best to respect Karamakate’s directives to be harmonious with nature. Theo actually does try to honor the ethnographic equivalent of the Hippocratic Oath (Star Trek geeks will recognize it as the “Prime Directive”), not doing any harm to existing cultures by introducing superior technology. But when one tribe sees his compass, the leader takes it despite Theo’s angry pleas that it will make them lose their navigational ability to use the sky and the stars.

Knowledge, gained and lost, is constantly in tension. Theo and Evan insist on lugging suitcases full of photos, personal journals and mementos from home around the Amazon, which Karamakate ridicules. But later, an older and wiser Karamakate hangs his head and admits that he’s forgotten so much of his own dying traditions that he’s become what he calls a chullachaqui: an empty, hollow shell of his former self, with no memories, drifting around the world like a ghost “lost in time without time.”

At least he sidestepped indoctrination. One riverside village is a former rubber plantation turned into a Spanish mission, where the priests look after what they call “the orphans of the rubber wars,” native children who are being forced to forget their own culture, speak only in Spanish and not their “pagan tongue,” sing Christmas carols in Latin, and embrace Jesus. Those who disobey are tied to a post and publicly whipped.

Four decades later and the mission has given way to a cult compound, where whipping has evolved into self-flagellation and a white man with a messiah complex is literally lording over everyone with a crown of thorns and a fickle temper of biblical proportions. “The only thing sacred in this jungle is me!” he cries, and eventually in a fit of plant-induced ecstasy he literalizes communion by commanding his disciples eat his flesh. Not much further on their journey, and not surprisingly, Evan and Karamakate come across a derelict town where half-mad, strung-out denizens are toasting the end of the world.

Colombian director Ciro Guerra says he was drawn to the subject matter because while the Amazon takes up half of his country (which itself is only 10 percent of the Amazon’s total enormity), he was almost completely unschooled in the region’s geography and history. In making the film, he not only befriended the still-extant tribal members but also enlisted them in the project. He even had an on-set “payé”—a medicine man who performed precautionary rituals to keep them safe. And his cinematographer, David Gallego, shot the film with such exquisite, luminous black and white photography that makes the movie feel out of time.

Mr. Guerra is also clearly indebted to Francis Ford Coppola’s Apocalypse Now and Werner Herzog’s Aguirre, the Wrath of God for their 1970s portraits of men witnessing the lunacy of colonialism gone awry. The difference here is that Embrace of the Serpent is clearly told from Karamakate’s point of view, and holds its Westerners at arm’s length. They are the weak, sick, unstable ones fearful of death and doomed to materialism. Karamakate, though far more in tune with the world around him, isn’t perfect either. But his journey toward reconciling his own demons is just as human and just as surprising. “The river is the anaconda’s son,” he explains, referring to the tribal myth of a serpent that descended from the Milky Way and brought their ancestors to Earth. “Her embrace will take you to ancient places, where life doesn’t exist, not even its embryo.”

Let yourself be enveloped in her embrace. 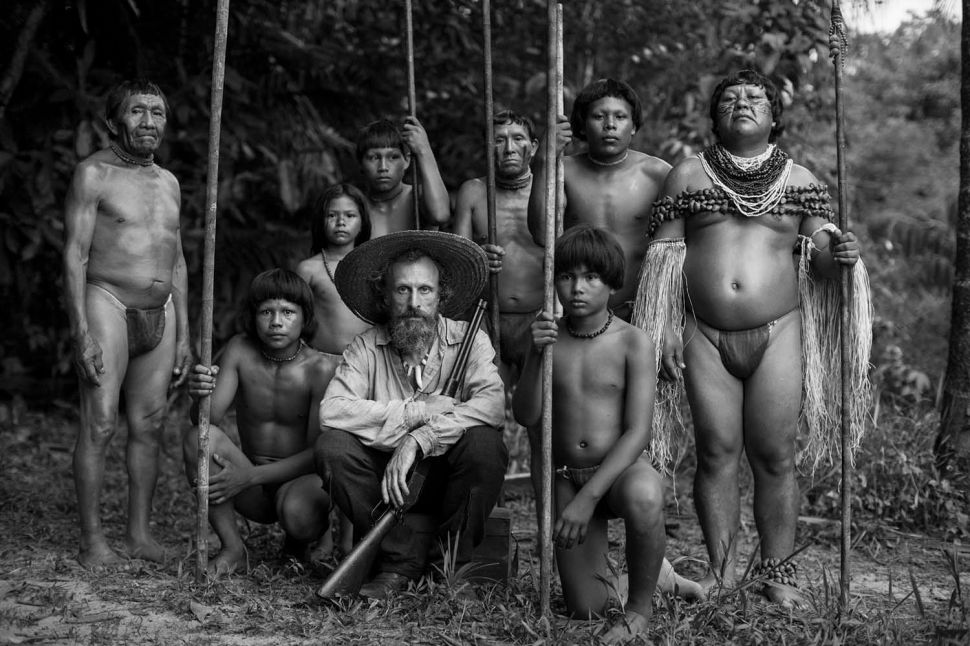