A rumble in the Bronx on Tuesday over a vacant City Council seat will pit an establishment favorite against five rivals—two of whom, sources tell the Observer, could prove formidable.

By all accounts Rafael Salamanca, district manager for Bronx Community Board 2, is perfectly poised to take over the turf of Maria del Carmen Arroyo, who abruptly resigned from the Council at the end of last year. He has massively out-fundraised his opponents and has the backing of the Bronx County Democratic operation, of virtually all the local elected officials, the Working Families Party and most of the major labor unions.

He also has a record in the district—a long-troubled tract of the borough spanning the neighborhoods of Hunts Point, Longwood, Melrose and parts of Morrisania and Soundview, areas where the median income barely breaks $18,000 a year. A Longwood resident, Mr. Salamanca used his position on the community board to close down the sketchy strip clubs that once proliferated across Hunts Point, and that contributed to the neighborhood’s reputation as a red-light district and haven for crime and violence.

“For years, Hunts Point was known as an anything-goes community,” Mr. Salamanca said, recounting over the phone how he lobbied the State Liquor Authority to yank the topless bars’ permits to serve alcohol. “I was successful at really advocating and proving my case.”

But Bronx insiders suggested that two candidates could present obstacles in Mr. Salamanca’s path to victory: activist Julio Pabon, and minister J. Loren Russell—who are the only others to receive matching funds from the city Campaign Finance Board. Mr. Pabon, a retired schoolteacher and longtime anti-County voice in the district, challenged Ms. Arroyo in the 2013 Democratic primary and drew nearly 1,900 votes, or roughly 30 percent of the ballots.

“He goes in with some votes and being known to the voters there,” said Michael Benjamin, a former assemblyman whose old turf overlapped with parts of the Council seat.

Mr. Russell received a large disbursement from the CFB ahead of both his rivals, and quickly converted it into a mailing (though Mr. Salamanca also has several pieces of literature out in the district), and is the lone African-American in a field crowded with Hispanic candidates.

No one issue has defined the election—perhaps a reflection of the variety of afflictions local residents face.

All three candidates described similar strategies for how they would combat these problems—work with the local police precincts to improve relations with residents, and to ease poverty and unemployment by forging strong community benefits agreements with the companies behind new development arising in the district.

“If we don’t have a plan, there will be one they give us that does not include the people who live here,” Mr. Russell told the Observer, highlighting his experience helping houses of worship negotiate the sale of their building rights to real estate interests. “We need to make sure that jobs come into the community.”

But the lack of a single galvanizing issue, combined with the likelihood of low turnout even compared to the area’s usual dismal attendance at the polls, makes it more difficult for an outsider candidate to rally the numbers needed for a successful revolt. And Soundview and Hunts Point have long served as the political base for two of the most powerful figures in the County establishment: Assemblyman Marcos Crespo, who serves as chairman of the Bronx Democratic machine, and Borough President Ruben Diaz Jr., who previously held Mr. Crespo’s seat in the State Legislature.

Mr. Pabon has long aligned himself with critics of the County-backed plan to allow grocery delivery service FreshDirect to relocate its headquarters and truck fleet to Council Speaker Melissa Mark-Viverito’s neighboring turf in Mott Haven, and his supporters highlight that Mr. Salamanca took a campaign donation from one of the company’s vice presidents. In New York City’s nonpartisan special elections for vacant Council seats, all candidates in  get to create their own ballot line to run on, and Mr. Pabon chose to call his “Bronx Not for Sale”—echoing a slogan of the anti-FreshDirect movement.

“We have a leadership, and a political organization, that’s totally out of touch,” Mr. Pabon said, reiterating arguments that the relocation will lead to nothing but increased asthma rates and minimum wage jobs.

But insiders are skeptical of the effectiveness of this line of attack.

“There’s certain places in this district that wouldn’t touch you if you’re County, but they’re really in the minority,” a source told the Observer.

Mr. Salamanca, for his part, noted that FreshDirect is already building and hiring, and promised to hold the company “accountable” to the local community.

Mr. Benjamin said Mr. Russell has sought to unify the black clergy in the area behind him, but the district is predominantly Hispanic. On top of that, Mr. Benjamin added that State Senator Rev. Ruben Diaz Sr., father of the borough president, has used his connections to Latino churches to promote Mr. Salamanca.

But Mr. Russell said he remained confident in his candidacy.

“They are the machine. I have no problem with that,” he said. “Their support of him does not indicate that I’m not the best qualified candidate for the job.” 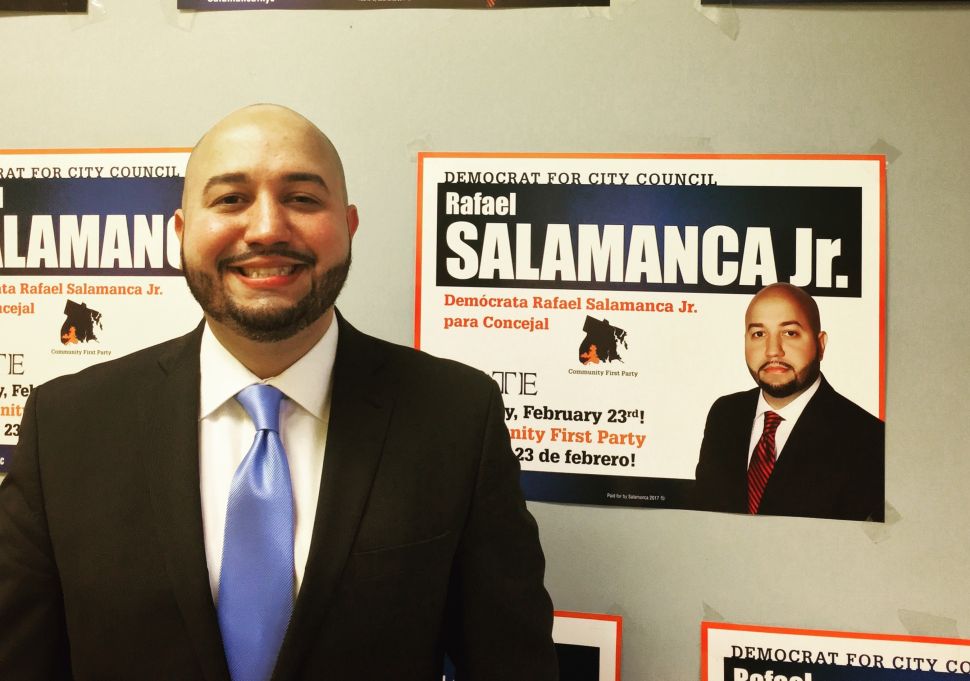