The trouble with virtual reality is that it is at once both too convincing and unbelievable. On the one hand, once a VR helmet is on your head and you start moving around a world, in your lizard brain, you really believe you are there. This reporter once crashed into a mountain on a virtual reality pegasus during a product demo of the VirZoom, a VR exercise bike, and felt a moment of real panic before impact.

On the other hand, a VR helmet can also create cognitive dissonance, because while your brain sees the world moving, if that movement is driven by a thumb on a controller attached to a behind on a couch, your brain knows your body isn’t moving.

The Observer got a chance to try out moving for real while exploring a fake world at Manhattan’s Storefront for Art and Architecture at the February 16 opening of its Closed Worlds exhibition, curated by Lydia Kallipoliti, which documents 41 prototype closed worlds that humans have attempted to build (such as the Biosphere 2 and Abu Dhabi’s Masdar City). We came to see Some World Games, a work by Farzin Farzin, a 42nd prototype of a closed environment, and the only one visitors can experience firsthand.

“The show in its entirety is a history of closed systems,” Farzin Lotfi-Jam, the founder of Farzin Farzin, said to the Observer during an interview at the opening. Some World Games is the one piece specifically commissioned for the show. It features a handful of specially made helmets hanging from a rotating assembly line suspended from the ceiling. Participants catch one of the helmets as they rove about the room, put it on and let visual cues in its display and the cord connected to their head guide them as they really walk around a virtual space. The Observer put one on and let the system guide us around a largely white, largely empty digital space, while bumping into other visitors at the opening along the way.

“We were interested in what the role of bodies are,” Mr. Lotfi-Jam said. “Maybe if we let you move around we can start to sync up what a virtual and physical world do?”

Inside Some World Games, there are three levels for viewers to look at. What’s right in front of them, which sort of replicates the room, in a vague outline within the larger white emptiness. Below, where there are models of some of the artifacts documented in the larger show. If the viewer focuses on one of the models long enough, it will activate that object and it will rise in the space and when it reaches the sky, the third level, something will happen. It might trigger sound or some new sight. Activating any of the objects is tough, though.

WeShareVR aims to be the YouTube for virtual reality

The hardest part is navigating when to turn. There are no real visual cues indicating that one of the two turns has been reached, but the cord the helmet is suspended from kind of tugs participants the right way, but we managed to pop one of the helmets off that cord by walking straight too far (we didn’t break it, don’t worry). It’s also challenging when other people are moving through the same area as the people wearing the headset. We are all so used to the people around us seeing each other making courteous little adjustments that many people at the opening simply didn’t get out of the way of folks walking with the helmets on.

Mr. Lotfi-Jam has created a very spare space. It’s more artistic than super high tech, but for people who have never had a virtual reality experience, here’s your chance. The show will remain open through April 9 and Farzin Farzin intends to improve and refine the technology as it goes. In fact, it should already work better than what we’ve described here, based on his promises that night. Let us know.

Interested viewers can dig deep into the piece and its 41 documented prototypes this weekend at a conference called, “Closed Worlds: Encounters That Never Happened.”

The helmet is one of the artist’s own devising. Its housing was printed at Brooklyn’s Voodoo Manufacturing with assistance from MakerBot and Joseph Vidich, Kin and Company. The software is run on the least expensive Android smartphone they could get their hands on.

Putting on a helmet and stumbling through a real space that you can no longer see while attached to a conveyor belt on the ceiling causes a certain amount of self-consciousness. Embrace it. This is what the future is going to feel like. 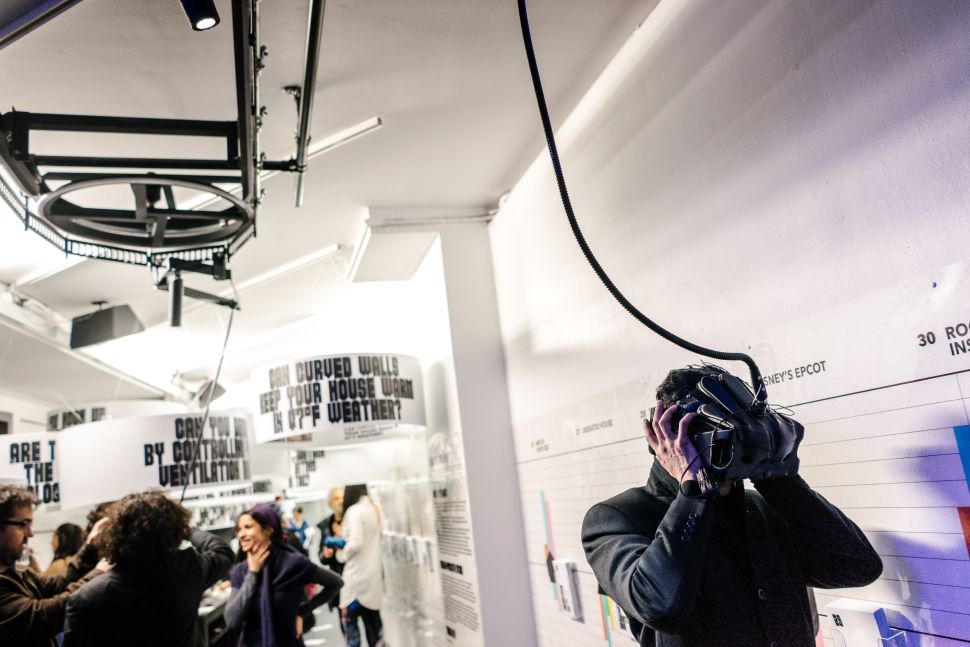