When VFILES show tonight at Spring Studios, the brand will be, as it has done for the past six years: looking forward. Amongst the first to recognize the talents of emerging designers like Hyein Seo, Ximon Lee and Andrea Jiapei Li, Julie Anne Quay’s brainchild has become a lot more then just a cultural barometer. It’s now an influencer.

One only has to look to the night’s featured performer: Sophie Beem. The rising star is the first official artist signed to Beyoncé’s label, a title that comes with quite a bit of cultural cache itself. On the runway, in addition to tapping design talents like Kiev’s Anton Belinskiy and the recent Central Saint Martin’s graduate Kim Shui, the focus will be on wearable tech.

That detail not only dovetails with the industry trying to figure out wearables (only weeks ago, press was invited to the unveiling of Isaac Mizrahi’s collaborative watch with HP) but more specifically with Fitbit’s announcement that they have collaborated with brand-of-the-moment Public School. The fruits of that union are set to have a preliminary unveiling at the brand’s Fall 2016 women’s show.

“We’re all about something providing for everyone and Public School does that.” said Youmi Bang, the product marketing manager for accessories at Fitbit, referencing the brand’s men’s show which hosted 50 members from the general public. The company intends for this to be a long-term project, sitting alongside their Tory Burch deal, and were tactical in reaching out to the DKNY creative directors. “Public School also adds a bit of a street edge that allows us to reach out to a different consumer.”

But tonight when models like Luka Sabbat and other social media influencers take the runway, they’ll be dressed in more “creative” version of wearables. “It’s important that fashion shouldn’t be limited to the fabric you can buy and the size of your needle,�� Ms. Quay said on Monday as designers milled about prepping looks for the show. “Fashion is now, it needs to embrace all these new multi fiberoptic fabrics and LEDs and neuro connections. We want to open the door to that too and not leave that to like Fitbit.”

As one component of accomplishing that, the VFILES team specifically searched for a tech-focused brand to show amongst the other emerging designers at their sixth, semi-annual event. This season, that brand was Neurocouture, a project that projects a visual representation of the wearer’s brain waves, onto their clothes. “It’s a way of wearing what you’re thinking in a sense,” said Neurocouture founder Nayana Malhotra. Prior to getting into fashion, Ms. Malhotra was a creative technologist and a researcher. “The way it works is that it pairs it’s readings of your brain waves and pairs that with a database of GIFs and projects that onto your clothing.” Ms. Malholtra admits that what is particularly compelling about her project, is not is current version but what could happen when it’s combined with others.

But VFILES (which Ms. Quay categorizes as a tech company) also has a release of its own, having reached out to Studio XO, the same company that made a flying dress for Lady Gaga, a digital mermaid dress for Azealia Banks and LED stage wear for the Black Eyed Peas. “We needed to find a partner that had similar philosophies as ours to develop wearable tech collection that was actually purchasable and affordable and something that these kids will wear.” The product was VFILES_XO.

Ms. Quay’s goals were fairly simple: wearers shouldn’t have to carry anything. Money, phones, notepads, anything. And the price point? Teens buy hoodies, so something comparable was the target.  Whether or not it was all accomplished in a way that was both effective and aesthetically pleasing is a decision to be made after tonight’s debut. But taking into account Studio XO’s past, it seems like a done deal.

“We were looking at their stuff and one of the things that they’ve created before is this pill,” Ms. Quay explained. “You eat this pill and your clothes grow out of your body. So the technology is there and we believe we have the young audience that’s receptive and we want to bring it to them.” 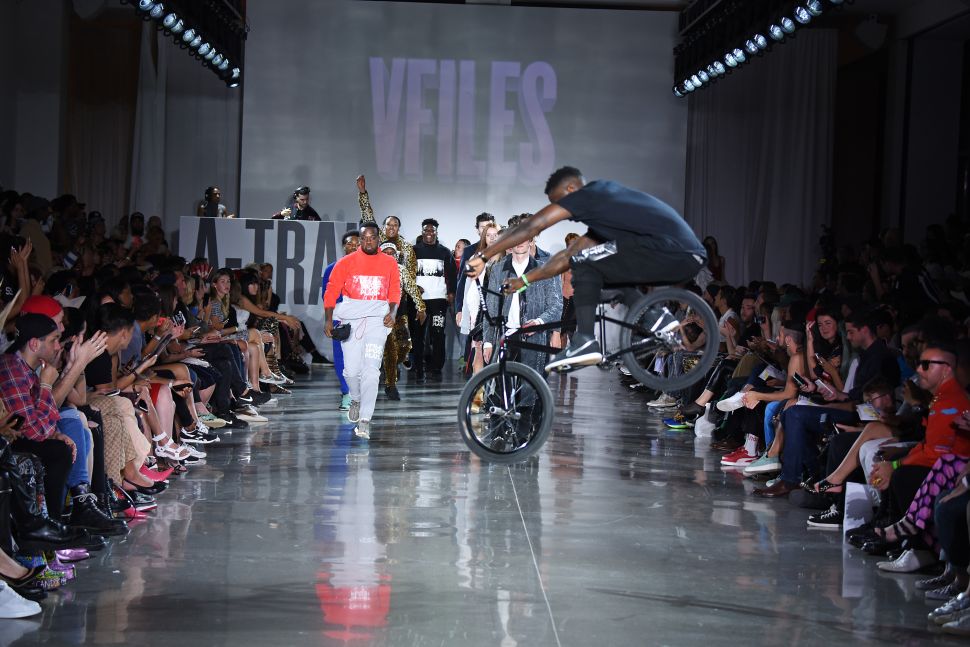