If you thought B.o.B. and Neil deGrasse Tyson’s Flat Earth raps were the most improbable diss tracks ever, wait until you hear the diss track about pharmaceuticals.

Martin Shkreli is the man everyone loves to hate lately. The CEO of Turing Pharmaceuticals raised the price of AIDS drug Daraprim from $13.50 to $750 a pill, and then smirked his way through a congressional hearing about it. He also bought the sole copy of the Wu-Tang Clan’s latest album, Once Upon a Time in Shaolin, for $2 million.

On Tuesday the rapper released an epic 12-minute diss track, insulting Mr. Shkreli and (with the help of his family) appealing to what little humanity the “pharma bro” has left.

The video starts with Ghostface reenacting his reaction upon first hearing that Mr. Shkreli bought his album. The confused rapper says “Who is this dude? I never seen him before in my life.”

Once Ghostface found out about Mr. Shkreli’s actions, he called him a “shithead,” and the ever gracious CEO responded with a video threatening to erase Ghostface’s rhymes from Shaolin. In the video, Mr. Shkreli was flanked by three henchmen in masks.

Never one to be outdone, Ghostface Photoshops the names Snap, Crackle and Pop on Mr. Shkreli’s bodyguards. He also puts Mr. Shkreli’s face on Paul Reubens’ body and christens him “Pee Wee Shkreli.” Among the rapper’s other insults are “fake Peter Pan cat,” “fake ass supervillain” and “the man with the 12 year old body.”

“Money don’t make you a man, bro,” Ghostface says. “You never been in the crib with welfare cheese and fried bologna.”

The attacks only escalate from there.

“You a killer, man,” Ghostface proclaims. “People don’t know where they’re gonna get their medicine from now. I’m not gonna allow you to keep killing these people.”

The most impassioned section of the video, however, comes when the rapper’s mother and sister enter, wearing shirts featuring Mr. Shkreli’s face and the phrase “2 Mil Sucker.” Ghostface’s mom calls Mr. Shkreli a wicked boy and threatens to “put you over my knee and spank your bum.”

His sister is even more emotional, recounting her struggle when she needed brain surgery and didn’t have insurance. Because of this, she has even more reason to be angry at his Daraprim stunt.

The video ends with Ghostface’s sister passionately pleading with Mr. Shkreli, and his mother.

“Give him a hug,” she says. “Tell him to stop fucking over people. Stop fucking around and grow the fuck up. Be a man. Be a man, Martin!”

Never seen someone real cry to his momma to handle his biz. Soft-serve ice cream rappers should shut they mouth before they get told again.

Sadly it looks like the troubles for both Mr. Shkreli and Wu-Tang Clan are far from over: both parties, along with auction house Paddle8, were sued by an artist for copyright infringement today. 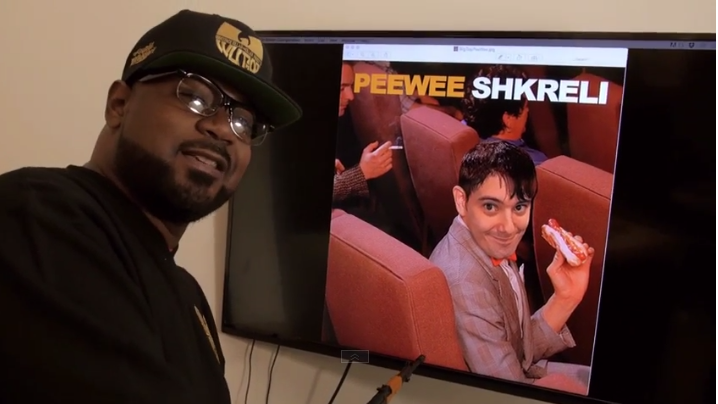