The instant Marnie says “It’s gonna rain,” you know this episode is going to be a wedding-themed shitstorm. And an actual storm. Seriously, if the cast of Girls can’t handle anything related to adulthood, how will they deal with the concept of a lifetime commitment? Answer: they throw chairs, scream dramatically at the sky, and have sex in cars. In other words, these kids still have a lot of growing up to do.

The opening of this episode is certainly not the giggly, champagne-filled scene that I want before my wedding day. Everyone is tense, including the bride herself. Seriously, not even Shosh is giggling. Things are so dire that Marnie has to leave and give herself a motivational talk in the mirror– unfortunately not as entertaining as Paul Rudd’s speech to himself in Wanderlust.

Just when Marnie flees the room, Hannah’s boyfriend, Fran, arrives. (Can we address that this man’s name is FRAN? Like the NANNY?) Anyways, Shosh takes this time to assure everyone that she’s totally fine that she didn’t bring a plus-one, since she’s in a long distance relationship and takes her bridesmaid duties very seriously, you know? To her credit, she is steaming the ish out of those dresses.

When Marnie returns from her conversation with herself, she sees that Hannah has selfishly brought a man into their “women’s hour.” (Is that a wedding thing? I have zero marital knowledge.) Marnie passive aggressively commands Shosh to tell Fran to leave. Then, Marnie tells Fran that of course he can stay… unless Shosh wants him to leave? Whatever! UGH. Honestly, this monster person should be marrying no one, even the equally atrocious Desi.

And speaking of the guitar-strumming infidel, what is Desi up to? He’s meditating with his bros, as you do before a wedding. Fran, Hannah, and Ray watch from the sidelines so that they can, as Ray puts it, let the “nightmare wash over you.” An accurate description, because at this moment Adam comes in. RUH ROH. Extreme awkwardness ensues, Hannah flees, and Desi forgets who Fran even is… but assures him that he loves him, all the same.

Meanwhile, Marnie continues to be utter garbage, this time towards her stylist. This scene has one of the few moments in Girls when I’ve laughed out loud– Marnie asks for her look to have a nod to her “cultural heritage as a white, Christian woman.” The makeup artist interprets that comment as “Selena Gomez meets Jesus.” Internet, make this a real wedding theme, please.

During this ongoing hooha, Jessa is outside, wearing ridiculous hair curlers and smoking. Adam, obviously, laughs at how weird she looks. Then somehow, in the middle of a conversation about how annoyingly stressed everyone is, the two kiss. Actually, they MAKE OUT. Ohhhhh nononono. Bad news bears. And this happens, of course, right as Jessa says that she’s “just trying to be a source of support.” Right, and the best way to do that is to make out with your friend’s ex-boyfriend, while aloofly smoking alone at your other friend’s wedding.

Back in the pre-wedding mancave, Ray wants to know what Fran’s intentions are with Hannah. Is he just in it for “a quick push push in the bush?” (PS. HA.) Of course, Ray isn’t really concerned about Hannah here– he’s really venting his frustration about how Marnie got away. He proceeds to give a finger-snap worthy speech about how horrible young men are. (Might be projecting personal experience a bit onto this here?) Poor Ray. The love of his life is getting married, and he can’t bring himself to do anything about it.

On cue, Desi comes in, freaking out that he can’t possibly get married. Because TURNS OUT he’s been engaged SEVEN TIMES before this! SEVEN. HOLY WHAT. But, guys, we should be gentle on him, you know. “He’s got a really complicated thing with his mom.” *Eye roll.*

Meanwhile, Hannah tries to argue that she can’t feel like herself if she has anything in her hair. I’m sorry, but if she was my bridesmaid, I would dropkick her at this moment. Hannah knows that Marnie made a mood board so that she could have style options!

Although I have to admit, I am less on Marnie’s side when she admits that her vision is from an Edward Sharpe music video. Until Hannah storms out like a child. And then HAS SEX in her bridesmaid dress. In a car. There’s no way there aren’t…stains… on that thing now. AKA, firmly back on Marnie’s side.

Post-sex, Fran tells Hannah that this is Desi’s eighth engagement. Hannah, doing the un-selfish thing for once, wants to tell Marnie. But she doesn’t do that, because it starts raining… so everything will clearly fall apart anyways.

Luckily for Desi, heavy rain makes the perfect backdrop for dramatically running into a lake with your clothes on while screaming and weeping. *Sigh.* On the upside, he yells towards the heavens the first true thing he’s ever said: “I’m a garbage person!” Poor Ray tries to use this moment to convince Desi that he is not Marnie’s destiny, but somehow manages to do the opposite. In true douchebag fashion, Desi flees the pond, claiming “I’ve got a fucking woman to marry!” He doesn’t seem to care that poor Ray is about to drown from desperation and/or lack of athletic ability.

At this point, the music swells, and, as the lyrics say, “The end is not near!” In a bad way. Hannah says that Marnie’s makeup looks like she “Went to Hershey Pennsylvania and just went nom nom nom.” AKA, she looks shitty. Makeup lady calls everyone twats and storms out. So does Marnie.

Hannah follows Marnie to the bathroom and says something that’s actually honest: everyone is being so awful because they’re scared that she’s getting married. HEY HANNAH?! Maybe tell your best friend that you’re scared because she’s wearing another woman’s engagement ring– from a man who has been engaged SEVEN times? Or not! Whatever!

And now, for some reason, the wedding is a go. Probably because Marnie spent so much money on flower crowns and hair extensions. Everyone takes a cute selfie together in the mirror, and everything is okay! The rain has cleared! The wedding is happening!

Hannah lingers on the porch, clearly not sure if she should say something and ruin the ceremony. But she doesn’t. Instead, she runs along towards the Easter-colored wedding with everyone else. And the episode ends there.

Can everyone pray with me that Marnie and Desi don’t actually get married? And that Ray realizes that he deserves a human who is more sane than Marnie? If we all hope really, really hard, we can change the course of a show that’s already been out of production for months. Hey, if Jessa can bathe in a stream and dry herself in a field, and still look that hot, then magic is definitely real. 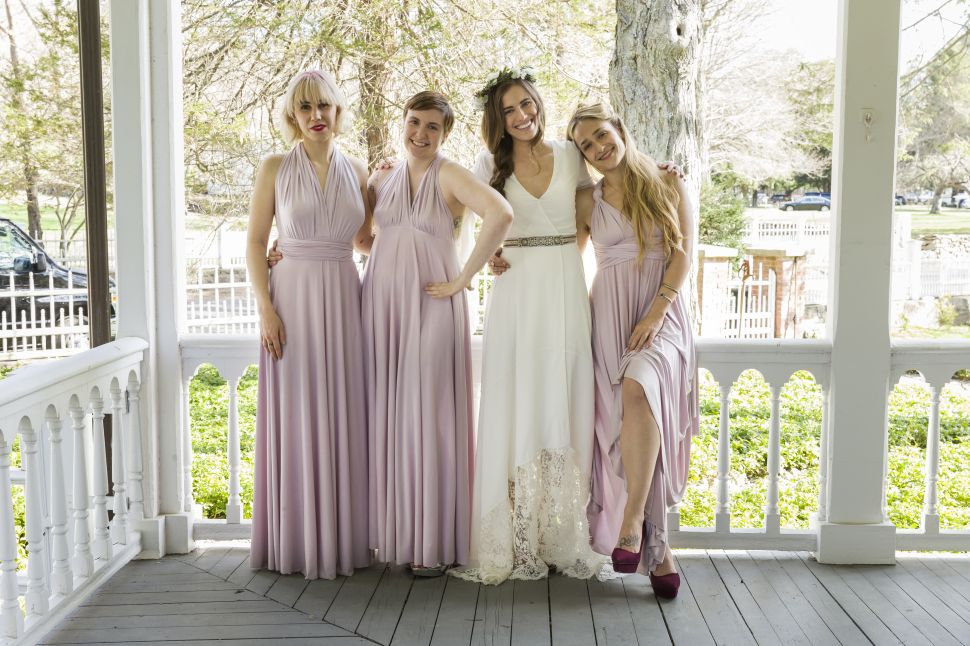