“Good Man” starts off in a very un-Girls-like way– with a late night, “Someone’s in the house!” moment. But don’t worry, Hannah and Fran aren’t about to get robbed. That’d be too normal. Instead, the noise is coming from a man tracing his body, in chalk, on the kitchen floor. Apparently this is Fran’s roommate, Jacob. And yes, he’s a fully grown man, so his justification that he wants to prove that his body is constantly growing makes zero sense. Being the sensitive soul that she is, Hannah calls Jacob crazy. To his face. Obviously, he flips out and goes on a rant. While most of the stuff that he says makes no sense, one point is especially hilarious– he’s mad that Hannah isn’t wearing pants: “I didn’t pay fucking quarters to see that bush!” If there’s one thing I got from this scene, it’s that there’s apparently somewhere you can see a good bush for a few quarters these days.

Back at her place, Hannah oh-so-kindly suggests to Fran that, they should forget that Jacob ever existed. Before we can let this amazing moment of empathy sink in– just kidding, Hannah has the emotional depth of a kiddy pool– Elijah struts into the kitchen in his boxers. It’s time to let Fran know the house rules. They’re pretty typical: keep it sexy, and keep the fridge stocked with seltzer. What, your house isn’t like that?

Then, just as Hannah and Fran (Frannah?) are about to leave, Elijah grabs Hannah, and they have a very non-friend-ish kiss. Except Elijah is VERY gay, soooo….. I guess Fran has to be okay with this? After all, Hannah and Elijah have “a very specific relationship and we have to express ourselves. We worked really hard to get here.” What, did they go to friend therapy? Questions.

Meanwhile, Caroline is breastfeeding her baby while her brother, Adam, watches. Awk sauce. Caroline takes this moment to let Adam know that, really, her baby is her mother. Gotta love that woman. Then, feeble lil’ Laird makes the unforgivable mistake of asking if she would like agave in her oatmeal. Caroline loses it. He should know that agave is off the charts on the glycemic index! THROW THE AGAVE AWAY, LAIRD, YOU DEVIL PERSON!

Next, Caroline stands up and asks Adam to hold the baby. He has the same reaction that I have when I’m given a miniature human: “Nope. Too small.” But he’s stuck holding the baby anyways. Once Caroline is out of the room, Laird asks Adam if he’s going to have a baby anytime soon. Unexpectedly, Adam says that he wants to. NOOO, Adam, please tell me you’re not thinking of having a baby with JESSA?! That kid would be fifty shades of fucked up. Ohhh boy.

Cut to Elijah and Ray starting at the most hilariously named coffee shop in TV history, Helvetica, where there are people wearing monocles and cups with no lids. Zoom out and, of course, Elijah is drinking their coffee. Ray is suitably displeased, in his grumpy old man way, and bans Elijah from going there ever again.

Now we’re at an AA meeting, where Adam is making googly eyes at Jessa. Ah, nothing says romance more than people confessing the fucked up things they did to get a fix. Symbolic of their relationship, perhaps? #Symbolism.

After the meeting, Jessa tries to escape, but Adam won’t let her. He knows that she has feelings for him, but won’t let herself admit it. Jessa claims that she’s done being shitty to her friends. Of course, we’ve all heard that one before. Let’s see how long this “no shittiness” promise lasts.

While all of this sexual tension is going on, Hannah addresses physical attraction in her own way– by teaching her eighth graders the book, Goodbye Columbus. One of the girls in the class, Nelly, is concerned that the material is a little bit too much like a “how-to” guide for sex. Come on, Nelly, shouldn’t you be grateful for some actual Sex Ed? At this point, an administrator comes to the door and tells Hannah that a crying man is on the phone for her. “Authoritative presence” Nelly is left in charge of the class. Way to lean in, Nelly.

Turns out, crying man is Hannah’s Dad. He’s in a Marriott in Times Square. That does NOT sound good– why is he not in Michigan? Yet before Hannah can come to his rescue, the principal calls her into his office. Ruh-roh. The Big Man thinks that “the best Phillip Roth for the kids… is no Phillip Roth.” Fair point. But obviously, Hannah does not agree. Yet this is a conversation for another time because she has to go save her gay Dad. As she tells the Principal, “I feel something invasive has happened to his body.” Eek ^2.

On the other side of town–I think?– Ray is having a very confusing confrontation at Helvetica. The guy at the counter somehow thinks that Ray’s place is a Starbucks… even though there’s no Starbucks sign? Why does he think this? I’m baffled.

Anyways, Ray finally addresses why he’s there– because of Helvetica’s “no lids” policy, people keep stealing them from his shop.  At this point, there’s one of the most cringe-worthy moments in Girls so far, and that’s saying something. Ray asks one of the coffee shop workers, who he calls sir, why they can’t just sell their own lids. Turns out, this person identifies as “they”. Ohnono. Ray is not ready prepared to deal with a gender and sexuality discussion. He wisely flees, to the calls of “I think you need to go, white man!”

Remember when Jessa and Adam said they’d just be friends? Turns out, that means going to a carnival, feeding each other food, giggling, and playing with little kids. You know, like totally platonic friends do. This can only end in a business-like handshake. *Eye roll.*

Oh God, and now we’re at the Times Square hotel with Hannah’s dad. Why is he crying?! My heart genuinely hurts during this scene– I feel like a concerned mother. Mr. Horvath is new to the wild seas of hookups, and doesn’t know how to navigate! He doesn’t know to ask for multiple photos from an Internet man. He doesn’t realize that you should probably shouldn’t pay for a plane ticket to meet a stranger. And he certainly doesn’t know to check for his wallet after sex, because he wants HANNAH to go back to that rando guy’s house and get his wallet for him. Well… this should be…. interesting.

Get ready for more familial heartbreak, because this is the moment that Hannah’s Mom calls… and tells her daughter that she wants to get a divorce. She also drops the most disgusting line of the season: “I’m surprised he’s not on Christopher Street, drowning in a pool of semen.” Whelp, looks like Hannah’s stuck with that doozy of a secret now. And that nasty image.

And now Hannah’s at random hookup man’s apartment. Turns out, his name is Keith. At this point, my heart continues to break– he must be in his sixties and still seems embarrassed about his sexuality. Oh, Keith. He’s just a boot dealer with a chihuahua, trying to find some human connection!

Unfortunately, this sexy mood is immediately crushed by Hannah’s awkward dinner with her father. Like everyone else, Papa Horvath tells Hannah that Fran is a good man, and she should try really hard to hold onto him. Do I smell some foreshadowing here? Why does everyone keep saying that Fran will leave Hannah?

Jokingly, Hannah says that her dad isn’t really in a position to talk about poor decisions– he probably had sex without a condom, too! Ha! But then, Papa Horvath’s face falls… he didn’t even think about using a condom. At this point, Hannah is officially in over her head. She calls Elijah for homosexual help.

When Hannah gets back to the table, she asks her dad where he’s going to stay after he flies home. After all, he can’t possibly think that he can go back to his wife after sleeping with Internet Man. But, apparently, he does. So, in another “Oh, this is horrible,” moment, Hannah has to tell her own father that he’s getting a divorce. They both burst into ugly tears just as Elijah is about to walk in. Smartly, he walks right on past and into an adjacent fancy bar.

At aforementioned drinking establishment, Elijah is hit on by someone who, in the Girls universe, is apparently very famous. I already have weird feelings about this– what megastar is alone at a bar and seduces strangers? Apparently Dil Harcourt. I don’t like him. What kind of asshole says “It’s nice to maintain the illusion of normalcy?” But, Elijah doesn’t care, because a few drinks later he’s watching Dil drive away in his chauffeured car, wearing a hardcore pair of googly eyes and holding his number.

Get your tissues ready. In our last scene, Hannah and her dad walk down the streets of New York City, real miserable-like. Papa Horvath doesn’t know what he’s going to do as a newly single man… or where he’s going to live. Hannah assures him that she’ll always be there to support him. Yet it’s clear from the look on her face that she doesn’t know what he’s going to do, either. Looks like Hannah needs to take care of someone else for once. You can use those tissues now. 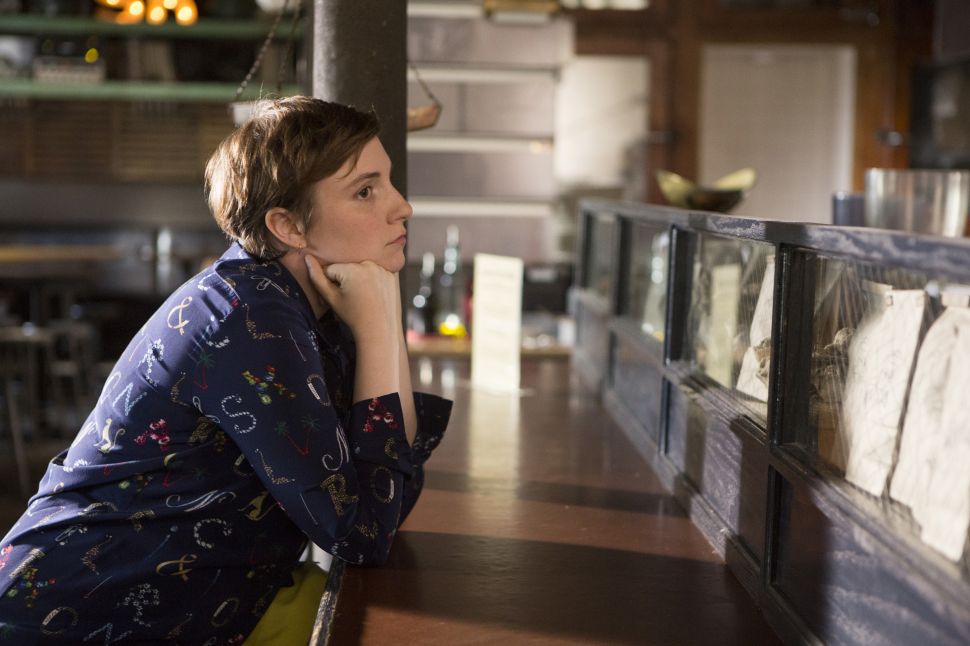