At the beginning of Thursday night’s Republican presidential debate—after the introductions but before the verbal combat—CNN ran a commercial for a film about terrorism, called London Has Fallen.

The trailer showed various explosions and cars flipping over and guns being fired and who-knows-what bursting into flames. The scenes played to deep-seated fears of the voters and symbolized the fire-breathing trash-talk that would follow.

Mr. Trump is leading Mr. Rubio and Mr. Cruz and two other guys in most of the public opinion polls and, so far, at the polling places. This two-hour television event was the last debate before next week’s Super Tuesday, also known as “the SEC primary” or—why not?—”The Revenge of the Confederacy.”

If Mr. Cruz loses his home state of Texas to Mr. Trump next Tuesday, his candidacy is probably doomed. Same goes for Mr. Rubio of Florida, which votes on March 15. Thus, Mr. Trump and his growing army of angry people may complete a hostile takeover of the Grand Old Party in time for the Ides of March. Beware, indeed.

At the beginning of the show, a narrator intoned: “It’s an epic battle for the soul of the party.” One touching scene showed President George H. W. Bush, clearly weakened by age, waving when introduced but unable to stand for the national anthem.

‘Go ahead. I’m relaxed now. You’re the basket case. Go ahead, go ahead. Don’t get nervous.’

Then came flurries of bitter words, harsh and hard-hearted, with Mr. Rubio and Mr. Cruz teaming up against New York’s billionaire real estate tycoon, portraying him as an inconsistent conservative with only vague promises with no thought-through policies.

All three men vied to show how rigid he would be to undocumented immigrants, ironic in that both Mr. Cruz and Mr. Rubio are sons of immigrants. Mr. Rubio—feistier than ever before—told of how Mr. Trump hired Polish people long ago in an irregular way.

Mr. Rubio accused Mr. Trump of getting in legal trouble by backing what Mr. Rubio called “a fake university.”

For $36,000, Mr. Rubio said, enrollees got a picture with a cardboard cutout of Mr. Trump. When Mr. Trump discussed his talent for building yooj corporations, Mr. Rubio counter-punched with “Bankrupting four companies!”

Mr. Trump fought back against both with a cocksure insouciance. Referring to Mr. Cruz’s relative unpopularity in his own party, Mr. Trump said “You should be ashamed of yourself.” He casually insulted his opponents in short flurries between longer diatribes.

With experience as a television host, Mr. Trump knows a few tricks about projecting to the camera. A viewer would pick up on it even with the sound turned off.

While Mr. Cruz and Mr. Rubio took turns lambasting his business deals and his past political positions, Mr. Trump stood tall between them, chest thrust out, as if to say “Hit me with your best shot.”

Wolf Blitzer looked like a hapless hockey official trying to break up a bench-clearing brawl.

As he listened, he closed his eyes but betrayed reaction by changing his facial expression from bored to bemused to a frown. Once in a while he’d purse his lips. When Mr. Trump responded to his foes, he made broad gestures with his arms that subtly violated their personal space. He pointed his finger at them as if it was a weapon.

At other times, he would seem aloof, tilting back his head, thrusting up his chin and gazing toward the ceiling. Pressed by the moderators and his foes about not releasing his tax returns, Mr. Trump said his recent years were being audited and that he gets audited more than other rich people.

In that Mitt Romney—the Republican nominee from 2012—has said a potential “bombshell” lurks in Mr. Trump’s tax returns, Mr. Trump responded that Mr. Romney “looked like a fool” over a similar issue in the last elections.

All three men often interrupted each other and host Wolf Blitzer looked like a hapless hockey official trying to break up a bench-clearing brawl. But the short insults while the other man is talking is a specialty of Mr. Trump’s style.

He’s been to the Sean Hannity school of broadcasting. Like Hannity, Mr. Trump uses the words “Excuse me! Excuse me!” in a way that really says “Shut up! Shut up!”

Cementing his bond with the Spanish-speaking voters, Mr. Trump said of a Telemundo poll: “I don’t believe anything Telemundo says.”

Around the middle of the show, with a disproportionate number of questions asked of him, Mr. Trump said with no little cynicism: “I know I’m good for the ratings, but this is ridiculous.”

When panelist Hugh Hewitt—a right-wing radio host—asked a challenging question about taxes to Mr. Trump, he responded with a gratuitous: “First of all, very few people listen to your radio show.”

Late in the debate, Mr. Rubio—without mentioning Mr. Trump by name—said “The time for games is over. This silliness. This loony-ness.”

Not all the insults were intramural. Mr. Rubio attacked President Obama by criticizing the Affordable Care Act. “It’s a job-killing law,” he lied.

After the debate, during a CNN interview, Mr. Trump called Mr. Rubio “a meltdown guy” because he perspires. “He’s just pouring down sweat,” Mr. Trump said.

Mr. Kasich seemed resigned to his minimal air time, but Mr. Carson was not.

In his opening statement, Mr. Carson chose apocalyptic mode. “Our nation is heading off the abyss of destruction,” he said. Later, when he ran long in an answer to a health-care question, he demanded “Let me just finish because I don’t get to talk much.”

Later on, Mr. Carson acknowledged that he is known as a whiner about his lack of air time.

“I’m going to whine,” he promised. In that candidates who are criticized are allowed time for a short rebuttal, Mr. Carson could be heard from off camera pleading, with tongue in cheek: “Can somebody attack me, please?

You don’t belong on the stage anymore. You are way out of your depth and you’ve moved from pathetic to annoying. Please do the nation a favor and drop out of this race. You are dead weight.

Afterward, on MSNBC, Chris Matthews said the debate “was too scatter-brained.” Also on MSNBC, Jonathan Capehart said attacks on Mr. Trump and by him “Sure brought the debate down in the gutter.”

He speculated that Mr. Rubio and Mr. Cruz “had to show America and the base and the audience that they weren’t afraid of this guy who’s been beating the hell out of them.”

“They exposed him as being a complete empty suit,” Mr. Thiessen said. 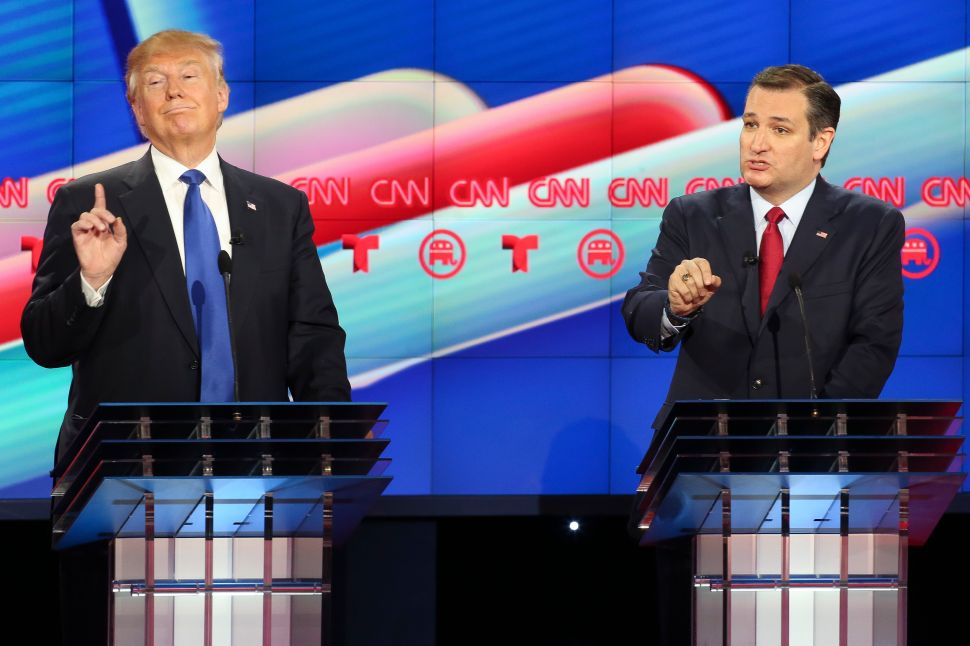