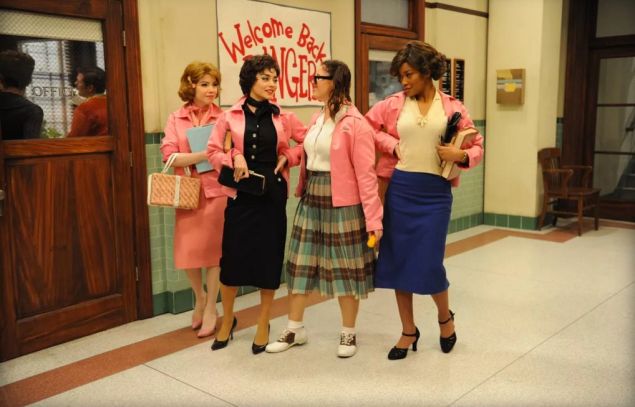 The new but not improved Pink Ladies of Grease Live! Via Fox

While trying to DVR Grease: Live last night before its premiere, I was struck by one peculiarity of the musical (and no, I’m not talking about the odd stunt casting choice of Bunk from The Wire as Coach Calhoun): it was on Fox. I had assumed that, like the “live,” audience-free versions of The Wiz, Peter Pan and The Sound of Music preceding Grease: Live, we’d be watching an NBC production.

That’s my mistake, and one that could have been easily rectified had I bothered to look at any of the press material, all of which served to make sure we knew Grease Live was a very different beast than NBC’s musicals. Like the notion of an audience, for one, which Grease: Live made sure we not only heard (loudly, after every number) but saw: filling the bleachers during scenes in an ingenious piece of stunt casting where the audience doubled for the Greek chorus of any scene played out inside an actual high school.

That wasn’t the only thing Fox did to differentiate their musical from the competition, but it was the only one that really mattered. All the other observable differences amounted to network peccadillos: Frenchie’s weirdly pitchy song before “Beauty School Dropout” (and the strange R&B version of that number), the total lack of chemistry between the main characters, down to the choice of productions (which, in a confusing choice of messaging, put a play that waxes nostalgic about white high schoolers spurning–and then reinforcing–the traditional family values of the 1950s on the same channel that once brought us Glee). These choices neither enhanced Grease: Live nor seriously detracted from it, but they did add to the clunkiness of a production so obviously trying to avoid the pitfalls that NBC’s live musicals have been criticized for.

So let’s just get down to the heart of it. Despite Grease: Live being a success in metrics of both critical approval and more standard Nielsen numbers (on which it scored as high as NBC’s inaugural live musical, The Sound of Music), I found the whole thing so…unnecessary. With so much riding on this musical–which had to compete with the Pro Bowl, for God’s sake–you’d think the executives at Fox would take pains to NOT make it look like some high school production that just so happened to be televised. Why not funnel some of that money into production values that would allow Grease: Live to do things that regular plays can’t do: use jump-cuts, say, or special effects; or go all Julie Taymor with the costuming and set design. Some of this, I know, is systemic of the musical itself: Grease ultimately is a pretty scaled back production and doesn’t have a lot of places where trimmed fat could be added back on. (The entire budget for the dance contest was apparently blown on either Mario Lopez, Cha Cha’s Hot Topic dress or both, instead of background dancers who could do the hand jive, baby.) But even within the constrains of a live, televised event–which, let’s be clear, Fox DOES know how to blow out, when it wants to–I couldn’t help think that Grease: Live was just a dud. Not even the shrieking audience (the absence of which in the NBC productions I’d never longed for more until Fox put them front and center) could buoy my opinion.

In my mind, the best version of the televised musical would be PBS’ 1981 recording of the American Playhouse’s Into the Woods. It was “live” in the sense that it had an audience and its production amounted to a staged reading of Stephen Sondheim and James Lapine’s beautiful fairytale-gone-awry; the fact that it was pre-recorded over the course of three productions did little to undermine the sense of immediacy that I understand to be behind this recent push of “live” musicals. (It is, in fact, far superior to the film version released last year, and for that reason alone I’m including the whole show in its entirety below. You are welcome.)

No one tunes into these things, I expect, for the same reason they tune into the first couple episodes of American Idol: the schadenfreude delight of watching someone fall on their face in front of a nation of viewers. Hell, Vanessa Hudgens’ father died hours before the show, and she still managed to turn out a pretty great performance. Plus, you can’t really go wrong by pairing Hamilton’s director (Thomas Kail) with the guy in charge of So You Think You Can Dance? (Alex Rudzinski). So if we’re not watching for the tightrope act that “live” television is often promising, and the experiment of “audience or no audience” is only semi-relevant; if half the people tuning into the show are watching on delayed playback like DVR’s or next-day clips, WHY this insistence on the live musical format at all?

Besides, of course, the huge ratings sweep. 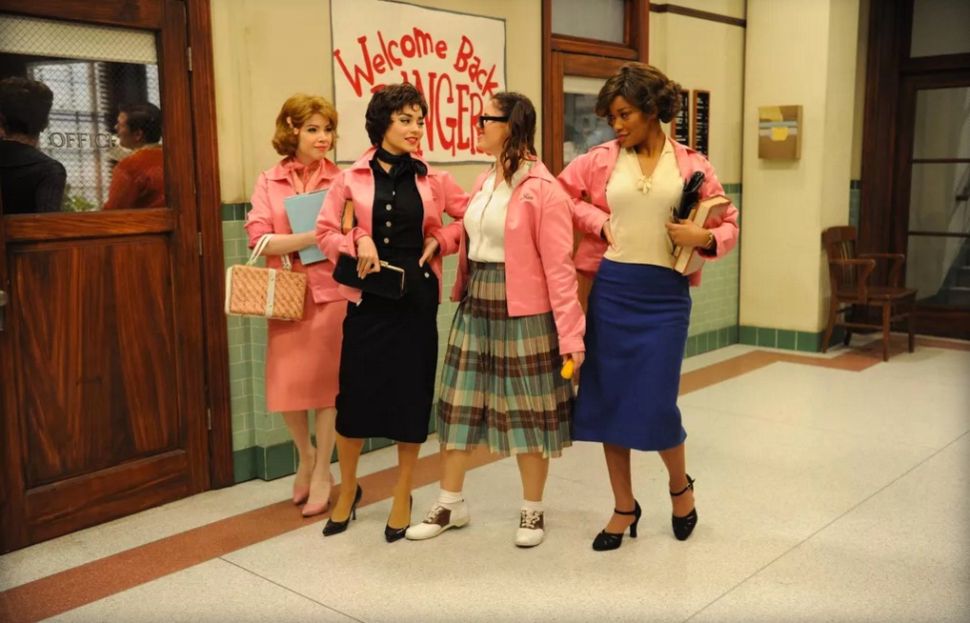