Cynical Doubters and Vicious Deniers dispute One; they dismiss indictment as fantasy. Consequence Two is counter-intuitive. So hang on.

Protecting secrets has a moral spine as well. Failure to protect classified information increases the risk of belligerent attack on America, its allies and their interests. Exposing classified information can endanger the lives of U.S. military personnel, intelligence agents and counter-intelligence officers. It certainly undermines morale at essential security agencies.

The denials become ever more elastic. See? They classified the info after she received it. No—sorry, it’s all over-classified. No, wait. Hold everything. Mis-classified!

The circumstances leading to a particular failure to protect secrecy matter. Accidents and mistakes do occur, and those responsible for the accidents and mistakes are held responsible. However, in former Secretary of State Hillary Clinton’s case, we confront a dangerous intelligence and counter-intelligence scandal created by her premeditated and systematic (hence criminal) mishandling of highly classified U.S. national security-related information.

Let’s return to the prospect for indictment. Cynical Doubters usually agree the evidence is overwhelming that Ms. Clinton intended to circumvent federal laws mandating the retention of government records, and in the process subverted laws protecting national security secrets. In the service of her personal political agenda, she chose to maintain personal control of information about her stint at State.

But forget about military and intel and FBI fuddy duds. A mountain range of evidence will not sway the ultra-partisan Obama Administration Justice Department—Democratic Party power trumps national security law. Attorney General Loretta Lynch will refuse to indict the inevitable Democratic presidential nominee. So there.

Compromising this type of information exposes ‘sources, methods and lives’ to enemy retaliation. Enemies retaliate against flesh and blood human spies by ‘liquidating’ them—spy jargon for murder or execution.

The latest operative statement: “I am 100 percent confident nothing will come from the review of my email account,” Ms. Clinton told MSNBC debate moderators. Why? Because investigators have discovered classified information in the personal emails of Colin Powell and Condi Rice, Bush Administration biggies. Everybody does it!

Yes, an ‘everybody does it’ defense. Just like Goldman Sachs execs lay $675,000 in speaking fees on everybody. As this essay is published, Ms. Clinton refuses to release transcripts of her Goldman Sachs orations, lectures, homilies.

No, everybody doesn’t do it. Neither General Powell nor Ms. Rice used a private, unsecure email system to routinely transmit classified U.S. government information. Neither attempted to use a private, unsecure system they didn’t create to circumvent government record keeping and security laws in order to maintain personal control of information for personal political purposes. Moreover, they didn’t order subordinates to use a system they didn’t create. Ms. Clinton created such a system. The published emails prove her subordinates used it—frequently, and with abandon.

The State Department inspector general found two emails sent to Mr. Powell that contained “confidential” information, the lowest level of classification. Mr. Powell says he can prove the information was not classified when transmitted to his personal email.  Gotcha! Exactly like Hillary! Uh, no. Quantitative difference: two emails versus Ms. Clinton’s 1,600 (so far). Qualitative difference: no attempt to avoid scrutiny and scrub a server. The third difference is this scandal’s Catch 22. At this point in time, 22 is the number of emails allegedly containing very highly-classified Top Secret Special Access Program (SAP) information. The State Department won’t release them and it darn well shouldn’t. This classification level often protects what the intelligence community calls “operational intelligence.” Compromising this type of information can expose “sources, methods and lives” to enemy retaliation. Enemies retaliate against flesh and blood human spies by “liquidating” them—spy jargon for murder or execution.

Protecting lives. Defending America. Pierce the email veil and we return to the institutional, legal and moral foundations for protecting classified information. Blackmail is another concern. Ms. Clinton’s system was unsecured. When asked his opinion, former Secretary of Defense Robert Gates thought it likely foreign agencies had penetrated it.

Democrats intent on nominating Ms. Clinton need to think about the next terror attack. Would a source compromised by Ms. Clinton’s Catch 22 have prevented it? Dateline 2017: Russian President Vladimir Putin makes an onerous demand and President Hillary Clinton caves. What’s Vlad have on Hillary?

For the moment Ms. Clinton owns this scandal, but permitting such blatant disregard for the law and U.S. security sets a strategic trap which threatens the Democratic Party’s national viability. The accusation “weak on defense” will tag another generation of Democratic candidates.

The trap has other teeth. Failure to punish Ms. Clinton’s calculated criminality at the highest levels of national government undermines the societal respect for law and elected government that sustains a free nation. The Democratic Party—the party of government—depends on respect for government.

If Attorney General Lynch cannot indict Ms. Clinton herself, then she must appoint a special prosecutor—if she really cares about her country and her party. 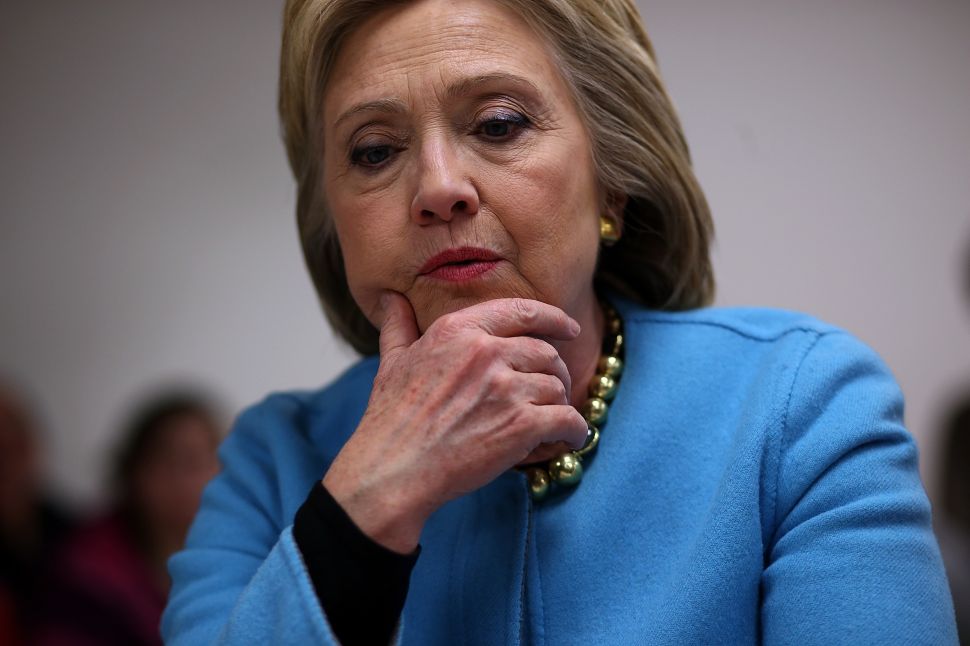