The Iranian leadership and the Revolutionary Guards are masters of media manipulation.

Every year, during the huge celebrations they hold for the anniversary of the 1979 Islamic Revolution, they parade and salute their great victories and the defeat of their enemies. This year, in their 37th Anniversary Celebration, the enemies they chose to highlight were Saudi Arabia and the United States of America—Israel was, of course, featured but not in the place of (dis)honor it has so regularly occupied.

Iranian media broadcast video of the millions of people who attended this year’s parades throughout Iran. Over 5,400 journalists covered the festivities and more than 450 VIPs from all over the world participated in the event. Iran wants to show the world, and their own countrymen, how great things are today and just how many things have changed since the ousting of the Shah.

Mohammed Reza Naqdi, the leader of the Basij, which is the paramilitary unit that controls the internal security of Iran, served as the keynote speaker during the celebrations. He chose the occasion to announce that Iran is the major power in the Middle East and the United States now takes a back seat to Iran militarily. Not merely one of the major powers, but the major power. He drove his point home by proclaiming that Iran “will not make any compromises with our enemies in the Middle East.”

Mr. Naqdi spoke of the tremendous tension between Shiites of Iran and the Sunnis of Saudi Arabia and elsewhere in the Muslim world. He said: “the hundreds of Revolutionary Guards generals fighting in Syria will never repeat the mistake of the Shiite Caliph Hassan ibn Ali who surrendered leadership of the Muslim world to Muawiyyah bin Abi Sufyan.”  He was referencing the Seventh Century when the second Imam of Shia decided to surrender at Kufa to the Sunnis.

Moving on to the modern world, Mr. Naqdi explained that the Shah of Iran was weak because he was allied with the United States and the West. He then elaborated, arguing that it is impossible to compare his high-flying country to Iran under the Shah’s rule, when it was subordinate to the American administration. Today, he went on, the United States “subordinates to Iran’s dominance in the Middle East and it cannot act in the region without getting the approval of the Supreme Leader of Iran.”

That perception of the world as seen through the eyes of Iranian leadership was the motivation for releasing  video of the ten captured US sailors kneeling with their hands behind their heads—symbolizing surrender and submission—as Iranian military trained their rifles on their backs.  A subsequent video showed a U.S. sailor weeping. The post was timed to coincide with Iran’s anniversary, it set the stage for the celebrations that were to come.

The Revolutionary Guard wanted every Iranian to understand, they wanted everyone in the world to see, what power Iran held. The goal was the humiliation of the United States.

That is why the Supreme Leader, The Grand Ayatollah himself, met with the Revolutionary Guard officers who captured the US sailors and thanked them publicly—in front of the media and in front of the entire country.

The people of Iran understood the message. So much so that on several of the floats in several of the anniversary parades was a re-enactment of the capture of the US sailors. The actor-participants were on their knees, hands behind their heads. In the city of Qoms they added another touch to the montage and the actors also had chains around their necks. As the float rolled by huge screams of applause rung out.

It was a modern day version of the original Roman victory pageant when Roman generals paraded their spoils and displayed their captives before the rapt citizens and leaders of Rome. 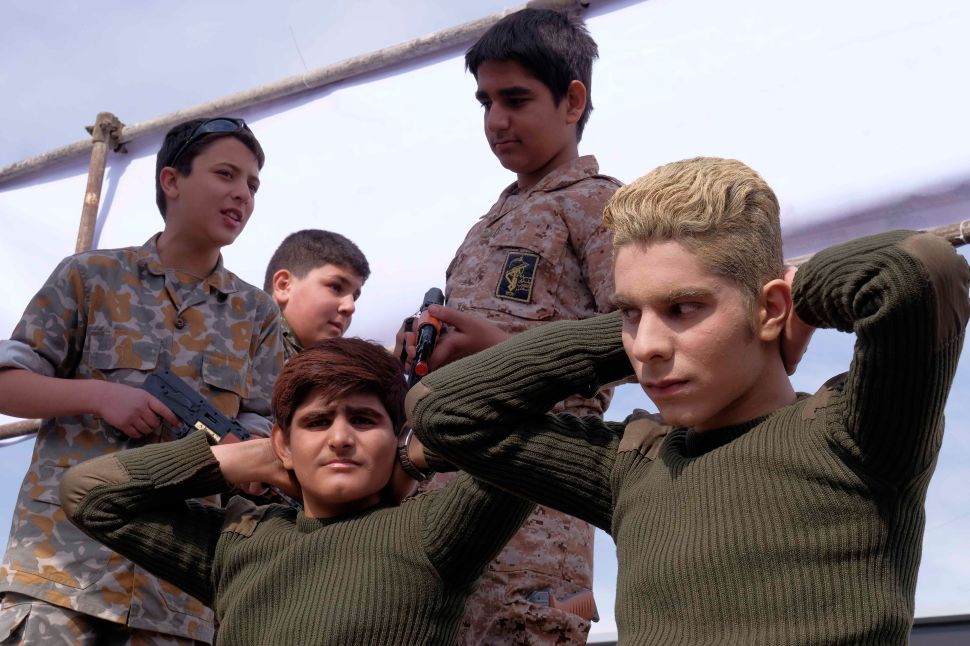