The story of Rumblr—the app that helped match people who wanted to fight each other—seemed too good to be true…because it wasn’t true. As we’ve explored in this column, a pesky fact like that will rarely prevent today’s media from finding some way to write about story if there is traffic in it. As media manipulators and marketers have realized this, they’ve begun to take advantage of the system in increasingly absurd and brazen ways.

In fact, this column itself seems to be a stop on the tour that successful hoaxsters and pranksters take after fooling the world. Folks like Mathew Carpenter of ShipYourEnemiesGlitter and James Shamsi of KardBlock have all reached out to me bragging about their stunts—knowing, probably, that it might lead to more coverage. And now, Rumblr has done the same.

When I heard from Matt Henderson, I suggested an interview because I think there is still plenty to learn from him and his team, despite that they benefit from it. When a marketing company is able to grow itself by building a fake product and fooling media outlets like VICE, New York Daily News and The Independent with it, they are like a hacker who has found a weakness in a computer system or a backdoor that’s been left open. On the one hand, we wish we could live in a world where people would not take advantage of these things. On the other hand, since we do live in such a world, we’re dependent on a certain type of individual to reveal what those weaknesses are. It’s how we’re able to identify them…and hopefully, close them.

Can you trust everything they say? Of course not. Are their intentions, like any hacker, suspect? Absolutely. But we can learn plenty.

Particularly because the loopholes these manipulators exploit while funny and seemingly innocuous, are the same ones that can be used by more ominous interests. When von Hughes, the agency behind Rumblr fooled The Independent, it was funny. But later that same day, it was also reporting on the U.S. 2016 election . Are we supposed to believe that The Independent has different standards and rigor for different stories? That they verify and investigate on their important stories but let things slide on the others? And for The Independent plug in essentially any media outlet in the world. Please.

It’s much more likely that these fun, weird, crazy, ridiculous stunts are not the exception but the rule. They prove the entire supply chain is tainted and that we must take it all in accordingly.

So without further delay, here are some words straight from the horse’s mouth. How much you trust any of it is up to you.

So walk us through who you are and what happened. And did it happen the way you expected it to happen?

We’re three young entrepreneurs with backgrounds in marketing, design, and engineering that make up von Hughes, a hybrid creative agency + product studio. We originally created Rumblr as a way to make our branding portfolio a bit more memorable. After the first initial bit of press got ahold of it, we realized that we had the opportunity to market it as if it were real. We came up with a few outrageous claims and kept a consistent story; and media outlets wrote about us as if the claims were 100% true. Not once did a reporter actually request to see our data or use our app before writing about it. Once our satire was swept under the rug by these big outlets, our goal became to make as much noise as possible. By the end of the 4-day campaign, over 200 outlets from all over the world wrote about us and our brand was exposed to tens of millions.

When you emailed me, you just said that you built and marketed Rumblr in what you thought was blatant satire. It does seem like the first story or two got the joke to some degree. The rest were willfully ignorant (or worse, had a hunch that it was fake and published the story anyway). Is that how you see it? What do you think of the idea that the media was using Rumblr to benefit just as much as Rumblr is using the media? You said yourself that outlets we’re able to write at least two stories about Rumblr (and here WE are a third type of story)

After the first few outlets wrote pieces about Rumblr, we did a video interview with a news station in Arizona. It has since been deleted, but here are a few quotes:

“We can’t just ignore the fact that boys, men, they all fight. We’ve always fought for the life of humanity. So why can’t we just provide them a way to do it more efficiently?”

“Think of some athletic fighting. I mean, you’re not trying to kill the other person, maybe you’re trying to have a little testosterone orchestra.”

To us, that was satire. We were mocking modern ‘startup culture.’ This news station either didn’t pick up on the satire, or just willfully ignored it. Rumblr was the perfect story because it was outrageous enough to get attention and real enough to get talked about. At the end of the day, media’s in the business of distributing information to the public. Their economic incentive is to bring as many people to their site as possible. Reporting on a hoax gives them the opportunity to write both the clickbait “this is real” story and the clickbait “this is fake” story. We made sure to put the focus on the people and the startup behind the app rather than just the app itself. Rumblr was a company, not a product. 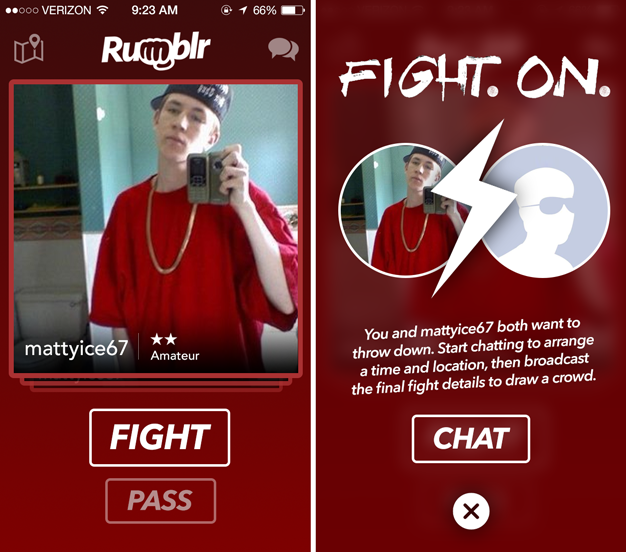 You also make a point of mentioning that the idea of “Tinder for fighting” was not new. Why were you able to capitalize where others were not?

We weren’t aware of the ‘Tinder for fighting’ idea before we came up with it. We decided to pursue it because we thought it was unique. However, like most ideas, it wasn’t. Our execution was successful because we built the idea around a story that hyper-targeted topics that the press and public care about. We constructed a real, professional brand and pushed it as if it were a venture-backed startup. We didn’t sleep during the 4-day campaign to make sure we could interact with every single tweet and fulfill (nearly) every single interview request.

Rumblr seemed to go viral abroad—in Australia, South Korea, Brazil and others—before receiving widespread attention by outlets in the U.S. Why do you think that is?

Perhaps it comes down to population, the countries where Rumblr went viral first had smaller echo chambers. It’s harder to break through the noise of louder countries like the USA and China. It could even come down to the number of nationally-competing media outlets in the country. 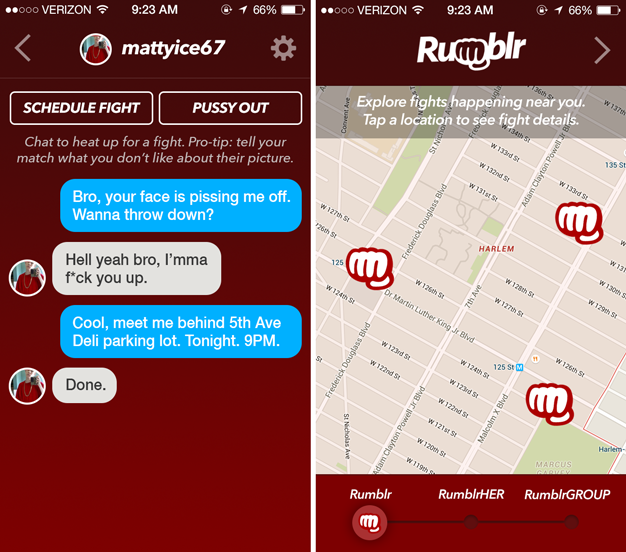 What was the turning point where Rumblr started to become more “real” as articles were published—or I’ve said before, as it was trade up the media chain? Was there a noticeably change in tone?

After we did the video interview with the news station in Arizona, we started to get more attention from large outlets. Business Insider Australia wrote about us which made the story go viral in Australia. Then the New York Daily News picked up the story, making it go viral on the east coast of the USA. That’s when the rest of the ‘mainstream’ outlets like The Washington Post, New York Magazine, and VICE followed. After we told New York Daily News that we were “100% serious,” the tone changed from “this app is real” to “this has to be fake.” Outlets like Business Insider, BBC, and FOX reached out to us for supplementary evidence for their “Rumblr is fake” stories.

Which outlet had the most egregious cover or behavior in your opinion? Also, I noticed The New York Times was conspicuously absent in your list of outlets that featured Rumblr. Did they express any interest or do you think they saw through the hoax (not that they always do)

Mashable was the first to interview us after Rumblr’s ‘launch.’ The reporter, Adario Strange, framed the entire story around our apparently obvious ignorance, incompetence, and greed. He attempted to frame us as being racist because we used both Caucasian and African American people in our marketing assets. Mashable must’ve been late to report on the story so they just created their own. Adam Clark Estes of Gizmodo stated that “Rumblr does seem a little bit racist.” These reporters show the intense desperation they have while trying to squeeze as much ad revenue out of the public they possibly can. The New York Times was absent during the Rumblr campaign. They either missed the story entirely or saw through the hoax, hard to say.

One of the questions I’ve gotten a lot was “But aren’t you worried about getting in trouble? Aren’t you worried this will be bad for business?” It sounds like it had the exact opposite impact for you. Is that the case? Was that your motivation (or expectation) from the outset?

Rumblr was an extremely successful campaign for us. We experienced a massive ROI on the small $69 investment. It wasn’t short-lived, either. We’ve had continued interest from traditional businesses, startups, e-commerce stores, agencies, musicians, and filmmakers wanting to work with us on a lot of different projects. Our goal (after the first initial press) was to garner as much attention as possible. The more conversations you’re apart of, the better your business will do. Any press is good press.

The brand and product are (now obviously) fictional. Do you think the world will ever see a real Rumblr?

We’re sure there will be a real Rumblr eventually, because, technically, it’s not hard to build. We don’t think it’s a good idea, but someone else might.

This Restaurant Made Fools of Hipsters Everywhere (Or Did They?)

Exclusive Interview: Meet Maddox, Owner of the Internet’s ‘Best Page in the Universe’

EXCLUSIVE: How This Left-Wing Activist Manipulates the Media to Spread His Message

Meet the Journalist Who Fooled Millions About Chocolate and Weight Loss 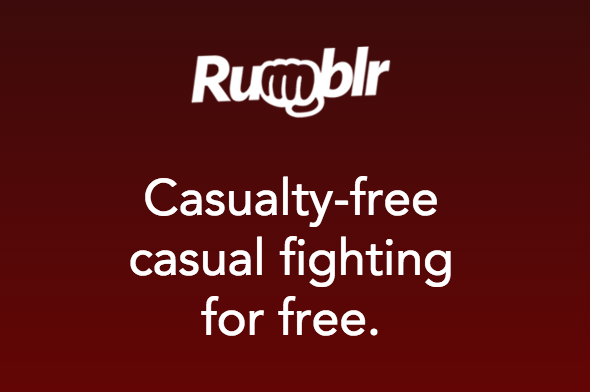