No one can convince me there’s something Annalise Keating can’t do. Season 2 started where it left off…with a jolt. Or rather, a shot. Just when we thought the show couldn’t possibly get any wilder with its twists and turns, it teases us with the main character being shot, and possibly dying.

The episode opens with Annalise lying in a pool of blood, muttering “Christophe” over and over as Wes stands over her. Enter Michaela. Now, at this point, Laurel has already coaxed the gun from Wes, and it’s in her hand when Michaela walks in. “You shot her??” Michaela is shaken, and horrified, as one would be when you walk into a room and find your professor gasping for breath in a pool of their own blood. In an interesting turn of events, Laurel covers for Wes.

Cut to two weeks later. Bonnie rouses Annalise from sleep and tells her gently “we’re home.” Whew. Not dead. Ok, cool. But since obviously the shows creators can’t let us rest for one single second, shit gets crazy. Again. Fast. Annalise pops two Vicodin to heal her gunshot wound and is roused from her nap by the sound of a woman knocking frantically at the front door and pleading that someone open it. When Annalise opens the door, there’s a frazzled woman holding and infant, and she quickly thrusts it at Annalise, while saying she saw Annalise on the news. She believes Annalise should care for this baby because Annalise beat death, so clearly she can do anything. Annalise flips. “I SAID COME BACK! NO!!” She pleads, holding the baby as the woman walks away. Annalise is beyond horrified. She looks like someone just handed her a baby mummy with three hundred eyes and a serpent tongue. I kid you not: Annalise does *not* want this thing in her hands.

Who does she summon? You guessed it, good ol’ lapdog Bonnie. Bonnie finds Annalise in the living room. Annalise is clearly relieved to have finally calmed the baby. Strangely, but in true Annalise fashion, she keeps calling the baby “it,” and demands Bonnie take it so that she can get some work done. As Annalise heads into her office, the camera goes to Bonnie, who we realize is just holding a bundled up blanket. She lets it fall to the floor. We later find out Annalise was just hallucinating, and Bonnie says to her “it was all in your head, just like last time.” At this point I’m not going to question things when someone says or does something batshit on this show.

Bonnie decides that Annalise is not competent to testify at the hearing the next day, the whole reason Annalise wanted to be out of the hospital so soon. She goes behind Annalise’s back, and together the team drafts up written testimony as if it were written by Ms. Keating. Once Annalise find this out, she *of course* decides that’s a bunch of malarkey, and partway through the hearing, in comes Annalise, barefaced, hobbling, and clutching her wound. This show certainly doesn’t spare in theatrics. Flashback to Laurel on her cell, just outside the courtroom, telling Annalise over the phone that the judge is throwing out the written testimony.

Annalise is clearly woozy on the stand, but tells the court they can drug test her if they think she’s still on her meds. The judge asks if she’s alright, and Annalise requests a brief recess. Once the court is back in session, Annalise tries to maintain composure, and is again subjected to the prosecutor’s badgering. “I didn’t see anything,” Annalise blurts out when the prosecutor asks for clarification. The prosecution takes this and runs with it, urging the judge to throw the entire case out. “Catherine didn’t do it. Catherine didn’t kill her parents.” She says.

Flashback. Annalise in the car with Catherine’s brother Caleb. “No prosecutor wasn’t to take down Patty Hearst, they want to take down her kidnapper.” Annalise successfully convinces him to convince his sister to say she was drugged by Phillip Jessup, as a way of lessening her alleged culpability to a jury. Catherine gets a plea bargain: five years in a minimum security prison. When she wasn’t even the one who shot Annalise or killed Emily Sinclair in the first place. Remember when I said Annalise can get anyone to do anything? I think that’s her strongest suit and boy was it ever evident in this episode.

Tonight’s episode concluded at the geographic heart of the operation: Annalise’s. Wes and Annalise get into an altercation about that whole her-calling-him-Christophe-thing. Wes is convinced Annalise knew his mother. She did, and we saw that in this episode via flashback, but we don’t yet know the extent of their (and by proxy Wes’,) connection. Annalise gets sick of Wes’ questioning and orders him gone, but shortly after calls out to him, and wanders downstairs. The episode wraps with Annalise holding and rocking the baby, smiling. Though we slowly see that she’s all alone, rocking by herself, just like she has been all along. 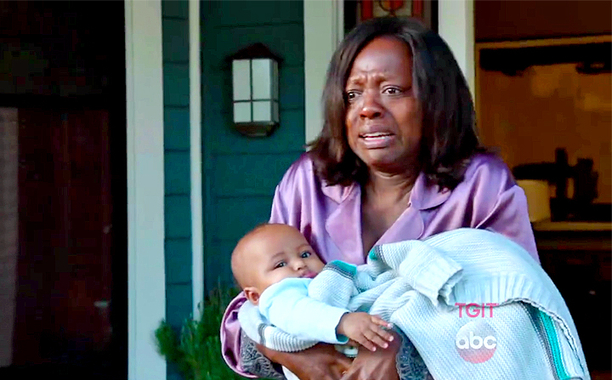