Whew. A breather. Something I didn’t even think this show was capable of, we were granted this week, thank you based god. After last week’s episode came out with guns literally blazing, this week was a welcome respite from the non-stop action as of late. Tonight’s episode opens with the sounds of Annalise puking. She then makes her way down the stairs to her team. It’s ten years ago, she’s pregnant, and a younger Bonnie is there. Clearly we’ve got a long way to go to unravel the complexity that is Annalise and Wes’ past. Meanwhile as that comes to light, I’m seriously living for Annalise’s maternity looks, especially those braids.

Fast forward ten years. Back to the present, we’re shown Wes and Annalise in two different doctor’s offices. Annalise is being treated for her gunshot wound, and Wes is seeking help for insomnia. When asked how much he sleeps, he says two to three hours. The shots cut back and forth, and both doctors separately recommend therapy to each of them. They both decline. It becomes increasingly obvious that Wes’ doctor isn’t going to help him. “Fine, I’ll go.” Wes says, “just don’t feel bad if I end up shooting myself,” he retorts bitterly. “I wish you hadn’t just said that,” the doctor replies. Wes apologizes, but the doctor states that she’s now obligated to keep him there on an involuntary psych hold. Yikes.

Next we see the crew convened outside a courtroom. Annalise bypasses them with a scowl and they speculate as to whether or not she hates them. (Hence the episode’s title being “She Hates Us.”) I find it disconcerting how much of the characters’ individual self-worths are tied to Annalise’s opinion of them. These are highly accomplished law students acting like a whiny, spineless partner whose entire sense of self hinges on their relationship with their significant other. Sure they’ve done some murders together and some felonious evidence tampering, but that’s all in a day’s work under Professor Keating. Nonetheless, it’s become increasingly obvious how codependent the “Keating 5” are on Annalise (and to a certain extent, each other,) emotionally. None of them seem to even have ties to anyone outside of their circle on the show whatsoever.

Inside the courtroom, proceedings are underway in some type of pre-trial hearing when they’re interrupted by a woman who turned out to be the victim’s mother. She says she wants the accused to be a part of a legal proceeding called “restorative justice,” something both Annalise and the D.A. vehemently oppose. The strangest part is that the thing she’s pushing for would result in a reduced sentence, not a harsher one, for the defendant (Annalise’s client.) After some time, the judge relents and sides with the mother. More on that in a bit.

Wes calls Laurel from the psych ward, and she quickly goes to meet him there. Once there, she pretends to be Wes’ girlfriend in an attempt to have him released. Her plan backfires. Dejected, Laurel returns to Annalise’s, whom she immediately makes privy to Wes’ whereabouts. Annalise doesn’t seem concerned. Caleb arrives and begs Annalise to help him find Philip. Not only does she not help him, she orders him away.
“It’s not my job to take care of you anymore. Leave.” she says tersely. On his way out, he and Michaela have a lovers’ quarrel wherein they both call each other whores. Michaela accuses Caleb of waiting until after they had sex to tell her about finding the gun in the vent. “You’re right. I just wanted to get laid. Glad we cleared that up,” Caleb shoots at her as he turns on his heel to leave. Not sure what that’s all about, but it feels oddly significant. At the very least, these two run-ins with Annalise continue illustrating that she’s not exactly going to win “World’s Most Empathetic” any time soon.

Later, at the “restorative justice” hearing, Annalise’s client eventually cracks and confesses to the murder he originally was going to plead “not guilty” to. Shockingly, the victim’s mother still wants him to have a lenient sentence. She gives an impassioned speech about the broken system, and how locking him up and disrupting yet another young man’s family isn’t the answer she’s looking for. After a hallway confrontation between Ms. Keating and the victim’s mother, Annalise sides with her, and tries to persuade the judge to show mercy on her client, stating we don’t need yet another young man of color locked up with the key thrown away. Yet that’s exactly what happens, though, when her client accepts the deal of life without parole in lieu of the D.A.’s original pursuit of the death penalty.

Back at Annalise’s, everyone finds out that not only is Wes in the psych ward, but also that Annalise knew and did nothing. Michaela says “I’m done doing whatever she says,” and walks out. The rest follow. They pile into a car, retrieve Wes, and have a “moment” in the car. They all feel they can’t rely on Annalise to give a shit about them or help them in any way at this point, and conclude they can only rely on each other.

As Wes walks up to his apartment door, we see a file that’s been placed there by Annalise. The same file she showed Wes’ mom in a flashback. Definitely a lot of foreshadowing going on. One of the last scenes of tonight’s episode involved a fight between Laurel and Frank, who’ve been fighting over various things the entire episode. She tells Frank he’s not her boyfriend. She says she knows he lies about things to her all the time, especially when he’s done Annalise’s bidding. As she walks toward the door to leave him and their relationship, he blurts out “I killed Lila.” Holy. Shit. Finally, we see Annalise take a call from Connor. He informs Annalise that he’s looking at some video that’s been emailed to him. “I think Philip’s back,” he says, and the episode ends. *Cue foreboding music.* In the preview for next week, we see not only Annalise but also one of “the 5” refer to her as “mommy.” Shit is about to get deeply weird, and I’m sure we won’t have a break like we did tonight anytime soon. 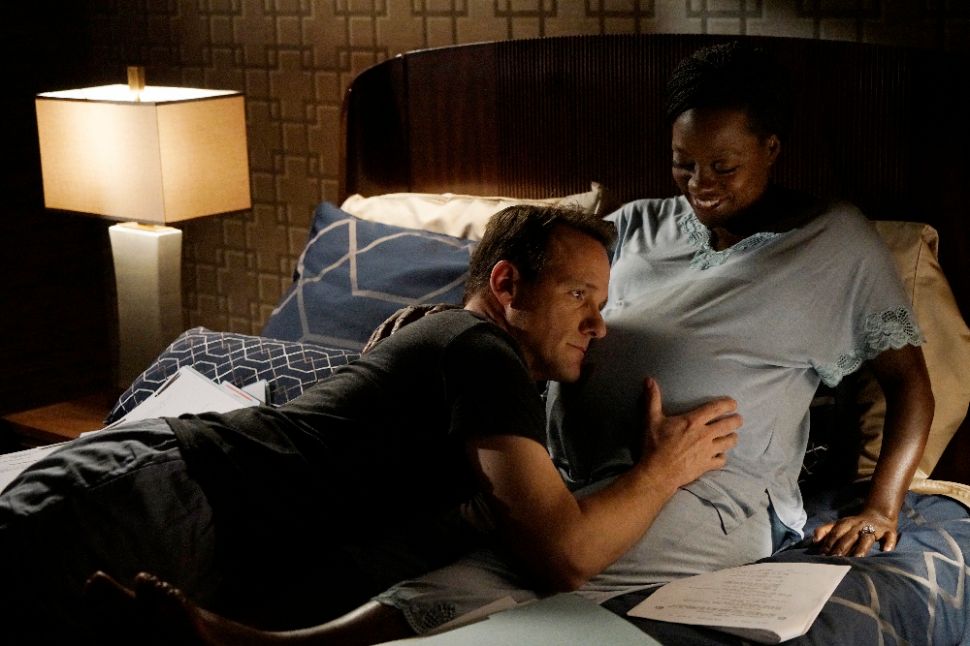