This week’s episode opens with Wes in his apartment, surrounded by the files Annalise left for him outside his door in a previous episode. “Charles Mahoney” is the name all over the files. Cut to 10 years earlier, with Annalise questioning Wes’ mom as well as a blond guy in jail, presumably Charles Mahoney. After a while of going back and forth between Annalise discussing the goings-on of a particular night with Wes’ mom (who we find out is named Rose;) Annalise congratulates blondie, saying he now has an alibi. His story matches Rose’s.

Next we see Connor, Annalise and Bonnie analyzing the footage sent via email to Connor from Philip Jessup. Connor is asking Annalise to help him deal with this. After some squabbling, Connor “asks nicely” and Annalise agrees to help because he “remembered his manners.” Majorly weird Mommy Dearest vibes going on. Annalise tells Bonnie to summon the rest of her team “except for Wes.”

We come to a teary-eyed Laurel talking to Frank about killing Lila. She is demanding to know why he killed her, speculating that he was sleeping with her when the phone rings. “Don’t you dare answer that,” Laurel says. “It’s Annalise,” Frank retorts through clenched teeth. Laurel exclaims that she doesn’t care. The phone keeps ringing as Laurel comes to a realization. “Oh my god,” she says, “you did it for Annalise??” She looks sick at the thought. It’s Bonnie on the phone, beckoning Frank to the house to help watch and deal with the footage.

At Annalise’s, people are coming unhinged about the video. Everyone is there except Laurel and Wes. Annalise assures her team that they’re fine because all it proves is that Philip was at the scene the night of the crime. “Sit down! Take a deep breath, and let mommy take care of it like she always does,” Annalise says to them. Excuse me… Whaaaaat??? What did she just say? Buckle up, because tonight’s episode is rife with ‘mommy’ and ‘daddy’ references.

Laurel went to Wes’ after her fight with Frank and finds Wes amongst a sea of papers. She asks who Charles Mahoney is. At this point, I’m relieved because I’ve been wondering the same thing for the last few episodes. Wes says he doesn’t know, but eventually caves and says Annalise dropped it off, and that it has to something with his mother, who Annalise knew. Laurel’s stunned.

Back in Annalise’s living room, Connor startles everyone by saying they’ve received another email. Next it gets a pretty outrageous: one million dollars is ordered to be wired to a bank account that’s listed in the email within 36 hours, or, according to the threatening email, the newest video (showing Michaela and Connor at the Hapstall mansion,) is going to police. What is this, some 90s spy movie? “Now what, Mommy?” Connor spits at Annalise. I kinda hope they stop with this “mommy” business because it’s bizarre and deeply unsettling. But then again we are talking about How to Get Away with Murder. “Unsettling” is kind of their thing.

Laurel and Wes abscond to Ohio to look into the Mahoney case. We go back in time to the Mahoney family in an interrogation room. Michaela and Annalise go to the Hapstall’s and convince Caleb to go to jail and obtain as much information about Philip Jessup from his sister Catherine as possible. Laurel and Wes pore over documents in Cleveland. We flashback to the Mahoney trial. We find out Wes’ mom backed out of testifying and left Ms. Keating stranded in the courtroom.

Bonnie and Annalise are in Annalise’s office. Bonnie reports that Caleb got no information about Philip from his sister during his jail visit. Annalise says that she never wanted children, but now she has five (referring to her team,) “and it’s the worst experience of my life.” Annalise orders them out of her house and says they’ll deal with the video ransom deadline in the morning. Back in Ohio, Wes is starting to piece things together. He thinks Annalise: got him off the wait list, added him to her team, and forgave him for bludgeoning her husband to death out of obligation to him. Wes’ mother was killed, and Wes thinks it was at the hands of the Mahoney family for her refusal to testify.

The rest of the episode reads like a series of Facebook relationship updates. Michaela returns to the Hapstall mansion. Her and Caleb say they both have missed each other and kiss. Bonnie ends things both personally and professionally with Asher once and for all. Connor tells Oliver he’s applying to Stanford to transfer and get away from Philip. Oliver’s not having it. Annalise and Nate try to have a normal dinner and proceed with their relationship, but end up fighting. They’ve clearly been through a lot and end things on a positive note. In a car in Cleveland, Laurel and Wes end a heart-to-heart with a kiss. (!!!)

Rewind ten years and we see Annalise pleading with Rose to testify. She refuses. Presently, Wes and Laurel continue diving into the Mahoney case but also the medical records of Wes’ mom’s death. It was ruled a suicide, but Wes is convinced it was a homicide. Laurel says they should go home. Nate looks over the Jessup footage and tells Annalise to do nothing. They watch the clock on the threatening email countdown. A new video pops up. It’s peeping-tom style footage of Annalise and Nate having dinner together. Laurel storms in and demands to speak with Annalise immediately and alone. There on a piece of paper she pilfered from the files in Ohio and then thrusts at Annalise, it says the primary suspect in Rose’s death was 12-year old Wes. “Is it true? Did Wes kill his mother??” The final shot is of child Wes ten years prior, standing over his mother with a bloody knife as she gasps for air on the ground. Not unlike when Wes stood over Annalise two episodes ago after shooting her in the stomach. How deep do these mommy issues go, anyway? Suddenly next Thursday feels entirely too far away. 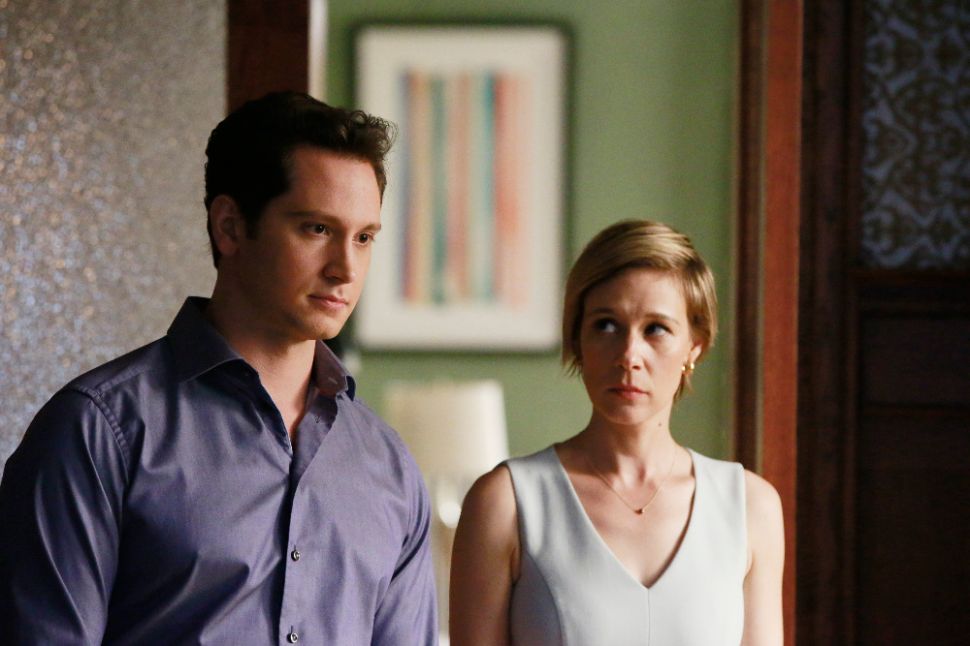