Gloria Steinem—the woman, I would argue, without whom we would not even have feminism baked into the fabric of America so deeply it has benefited even people who disavow it as a label—needs no defending from little old me.

But I am going to defend her anyway because I am shocked by the almost gleeful, gone-viral mischaracterization of her baited, tossed-off, ironic and common-sense remark on the Bill Maher show the other night and the vitriol it’s unleashed, which hasn’t entirely abated even after she explicitly said, “I apologize,” and, “I misspoke.”

And in thinking of the irony of a superbly accomplished person spending a lifetime fighting big battles with utter integrity only to be brought down, after decades of heroism, by such a fluke, I am going to risk an overblown analogy that I hope will not sound flippant: Just about a year ago—on February 11, 2015—Bob Simon, 74, was riding in a limousine down the safest part of the West Side Highway to a most benign destination—a seminar—when his driver lost control of the car, and Mr. Simon was instantly killed. Here was America’s most distinguished warhorse of a journalist, who had, for nearly 50 years, covered every global conflict since Vietnam and spent 40 days in Iraqi captivity during the first Gulf War, suddenly dead in the most random, bizarrely prosaic way, doing something inordinately safe, especially for him.

Now, vile social media hate posts about Ms. Steinem (one male Facebooker: “81-year-old Playboy Bunny says something really stupid”; one female Facebooker: “totally gross; vermin using sex as an issue”) are certainly not the same as death, but they are an egregious blow to the deeply earned respect for a woman who has been a dedicated, 24/7 feminist for the same almost 50 years that Mr. Simon was a 24/7 war correspondent.

As one Facebooker Ellen Cavolina Porter, put it, “Amazing you can spend your whole life doing something these days and people—most of whom don’t understand what that takes—are ready to smear you in a moment.” And as my friend, writer Lesley Dormen, put it, “The hostility toward…81-year-old Gloria Steinem is heartbreaking and astonishing…. Trashing Gloria Steinem for a sardonic, incoherently expressed statement and/or lapse of judgment on a comedy talk show. Ageism? Patriarchy? Really? [She] made our lives possible. It would be ironic if so much weren’t at stake.”

Here is what happened: Ms. Steinem went on the Bill Maher show on Friday night to promote her book My Life On The Road (and if you need any proof of the time Ms. Steinem has spent stumping for feminism, it’s right there in a book that also shows her in a charming new light as the daughter of a lovably reckless itinerant raconteur of a father). She and Mr. Maher bantered convivially, and she was a good sport about his slightly ageist jokes (“You’re still rocking those hip huggers, yeah…”). He zeroed in, hard, on the fact that young women seem to be going for Bernie Sanders more than for Ms. Clinton—“They really don’t like Hillary,” he said. Ms. Steinem made some sound points—women tend to get more radical as they get older, while men get more conservative; and she gave praise and credit to young women for being “very, very activist”—emphasis added—“way more feminist than we were.” In my book, that’s a compliment.

Ms. Steinem made some sound points—women tend to get more radical as they get older while men get more conservative; and she gave praise and credit to young women for being “very, very activist…way more feminist than we were.” In my book, that’s a compliment.

She did not say that she supported Ms. Clinton for president (although she has written a widely read Op-Ed making that point) and nothing, repeat, nothing in her tone was remotely judgmental. But Mr. Maher kept going, and she ended up quipping, “When you’re young you’re thinking, ‘Where are the boys? The boys are with Bernie.” Then he jumped on her, likely seeing his click-bait bonanza: “Whoa, now if I said that … you’d call me a sexist.” She denied that she would call him sexist and continued, “And the boys are thinking—” He cut her off just when she seemed clearly about to say that the boys were also looking for the girls.

Perhaps now sensing she had been caught in a trap, she earnestly (almost poignantly) asked him, “How well do you know me?” clearly implying, Come on, I didn’t mean it that way and you know it. He turned her inquiry into a creepy joke: “Not as well as I’d like to know you.”

I was watching this in real time, and my takeaway was that Ms. Steinem—relaxed on a talk show and also pressed for a response—became a common-sense observer of life and conceded a harmless truism: Political activism, for young people especially, is generational more than gender-based—male or female. In terms of driving to rallies and hoisting signs and getting all excited about a candidate, you’re going to gravitate to your peer group. Duh.

But that’s not what happened over the weekend, when the sound bite was immaculately tweezed out like a prize specimen of gotcha! hypocrisy. And Gloria Steinem, on the basis of that one quip, was shamed. Even some serious feminists, of all ages, who had always supported her, chastised her. And when former Secretary of State Madeleine Albright, on the next day, cluelessly reprised the intentionally over-the-top remark she had once gotten you-go-girl! props for—“There’s a special place in hell for women who don’t help other women”—her remark and Ms. Steinem’s (made in totally different arenas, with no coordination) were linked as older women “scold[ing]” younger ones (the verb the Times used in its headline).

(Poor Ms. Albright. She had every reason to think the quote would be a hit. Three years ago, Taylor Swift, then disliked among elite women, made the same remark because comedian Amy Poehler had made fun of her. When Ms. Swift’s supposed snark was mocked by Ms. Poehler’s friend Tina Fey, Ms. Swift credited the quote as having come from Katie Couric, whom she admired. That helped her a little. But it was soon revealed that the quote had originated with Ms. Albright, and that fact really exonerated Ms. Swift. Ms. Albright apparently didn’t realize that timing is everything. What made Taylor Swift look good in 2013 did not mean the same thing in 2016. As the Zen koan goes, you never step in the same river twice, especially on certain days and especially on social media. And this time it was more than that the distinguished Ms. Albright stepped into.)

What happened to Ms. Steinem was not fair. Yes, she’s a highly seasoned public speaker, not a naïf, but—to her credit—she’s old school. She was not thinking of sound-bite traps laid, and she was palpably comfortable and good-willed with Mr. Maher, who of course had every right to do a funny, snarky opening monologue on what many think is Ms. Clinton’s ineptitude as a presidential candidate. Maybe Ms. Steinem should have sensed something coming, but she didn’t seem to—and I think that’s to her credit.

People who know Ms. Steinem well know that she has worked for the movement selflessly for decades. She has never “cashed in,” even after the notions of “branding” and “women’s self-empowerment” were on the rise. She has operated with organic, painstaking integrity from the beginning—Ms. magazine was a collectivist operation where decisions were made communally, even though she seemed to be the star that made it successful. Though Betty Friedan’s NOW and a whole cadre of dedicated women made feminism happen, piece by piece, issue by issue, and march by march, in the very early 1970s only someone with Ms. Steinem’s natural glamour could disprove the then-wildly prevalent notion (which was inhibiting to women who wanted to wander in but were afraid to) that “women’s libbers” were bitter, homely man haters. This seems trivial now, but believe me, it was not at all trivial then.

And if Ms. Steinem was a spokesperson, she was a democratic one and not just for show—from her heart. She seemed uncomfortable with what might be called her star power. She always did speaking engagements in equal tandem with a woman of color, and she has made abundantly clear that her dear friend, the late Wilma Mankiller, and other nonwhite women have been some of the people she looks up to, and has learned from and been nourished by, most in this world. She’s—I mean this in the best possible way—old-fashioned kumbaya. She has given, not taken, and she has never stopped. It is misleading and cruel to hold this cherry-picked remark, so innocent (in my view), though perhaps awkward, in its live-TV context, against her—to besmirch her reputation with a whole Google page of repetitive untruths.

A few years ago I did a little profile of Ms. Steinem when she was chosen as Glamour magazine’s Lifetime Achievement Award winner. I talked to her 1960s roommate, another woman of great integrity, actress Ali MacGraw. Ms. Steinem was a fledgling writer, MacGraw a fashion stylist, when they shared an apartment. Here’s what Ms. MacGraw said to me: “Gloria was a beautiful creature with so much substance and kindness, and—this is important: not a bit of phony charm. She never sold herself out, never—and that’s decades of ‘never.’ ” Stylistically and ethically, “she was not like others—‘Maybe I’ll chop off my hair or dye it blond. ’ ‘I’m sick of wearing stilettos; I’ll switch to Birkenstocks.’ She had a consistent core. Inside and outside, Gloria today is the same principled person I roomed with 50 years ago.”

Here was the most telling thing I got from my interview with Steinem for that piece, and I want to leave you with it now: While she is traveling—living that “life on the road” of hers—she is forever slumping in those uncomfortable airport waiting room bucket chairs. Recently, while almost nodding off, she was excitedly recognized by an airport cleaning woman. “She told me,” Ms. Steinem said, “that she was a first-generation immigrant who didn’t finish high school, but that her daughter is going to college and that the women’s movement made all the difference. Then she said, pointing, ‘When I need a nap, I sleep in this broom closet.’ ”

Steinem paused a beat to accentuate how much the cleaning woman’s next words meant to her. “‘Honey, do you want to sleep in this closet?’ ”

That’s who Gloria Steinem is, not the inaccurate caricature splattered all over the web today. 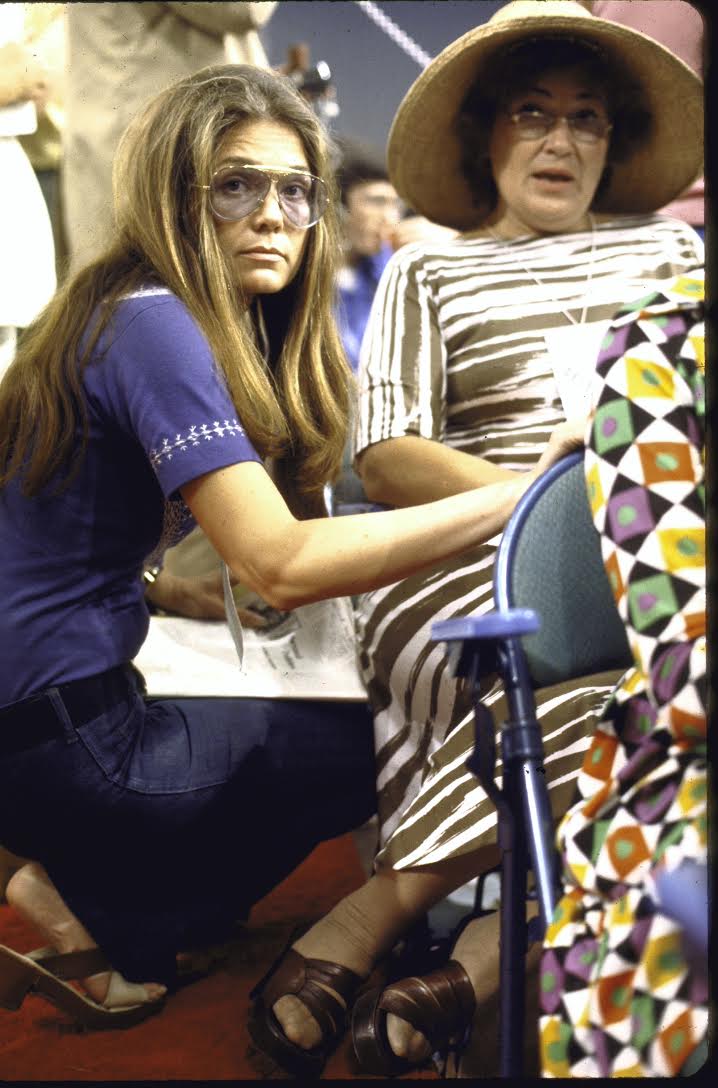