The last time Hillary Clinton won a competitive election, there was no such thing as Facebook, Twitter, or the iPod. America Online dominated the Internet. A black president was a character played by Morgan Freeman.

Ms. Clinton’s opponent was Rick Lazio, a Long Island congressman and Republican, and she was the former first lady parachuted into New York State to replace the late Daniel Patrick Moynihan in the United States Senate. The year was 2000. And Mr. Lazio, to be fair, was no pushover.

But Mr. Lazio wasn’t the Republican Party’s first choice. That was Rudolph Giuliani, the New York City mayor. He would drop out after announcing his marriage was over and he was fighting prostate cancer.

Mr. Lazio was unknown statewide, an underdog who appeared close to pulling off the upset that September before wandering across a debate stage, sticking his campaign finance pledge in Ms. Clinton’s face and demanding she sign it. Wagging his finger and towering over the former first lady, he came off as menacing and sexist. Mr. Lazio never recovered, and Ms. Clinton demolished him by 12 points. She breezed to re-election against nominal opposition in 2006.

In 2008, in her first real electoral test since 2000, she would lose to President Barack Obama. Eight years later, as the Democratic primary turns south and west and nasty once more, Ms. Clinton is up against another insurgent many deride as ultimately unelectable: Sen. Bernie Sanders of Vermont.

The arguments against Mr. Sanders for president are reasonable enough. He is 74-years-old, a self-professed democratic socialist and a senator from the second smallest state in America. He is a white male from one of the whitest states trying to carry the banner of an increasingly diverse Democratic Party. As an independent, he doesn’t even belong to the party.

“Hillary Clinton doesn’t have to explain socialism to suburban voters,” Congressman Steve Israel, the Democrat who replaced Mr. Lazio in the House, told the New York Times in January.

Yet if Mr. Sanders, who nearly beat Ms. Clinton in Iowa and won New Hampshire outright, can somehow overcome the former secretary of state, U.S. senator and first lady, he probably wouldn’t be in much worse shape than Democratic nominee Hillary Clinton, despite the claims of many pundits and Clinton backers.

Let’s start by saying it’s a bit disingenuous to follow Mr. Sanders’ own central argument for his electability: he beats Republicans in head-to-head match-ups. As he’s noted on numerous occasions, he consistently outpolls Donald Trump and Sen. Ted Cruz of Texas, two of the GOP’s front-runners. Since we don’t know who the Republican nominee will be and head-to-head polls this far out from a general election are very unreliable, Mr. Sanders is being misleading. By the time the Democrats and Republicans settle on their nominees in July, the dynamics of the race will have probably changed several times over, and these polls will be moot.

The reason to bet on Mr. Sanders being competitive in the general election has to do with a force beyond his control: the remarkable polarization of the electorate. More voters than ever despise the other party rather than embrace their own, a phenomenon known as “negative polarization,” and this means there are relatively few voters left who will be genuinely undecided between the Democratic and Republican candidates.

“The rise of negative partisanship means that very few Republicans or independents who lean toward the Republican Party will vote for Hillary Clinton or any other Democratic presidential candidate in 2016,” wrote Alan Abramowitz and Steven Webster, two political scientists at Emory University, last July. “Likewise, very few Democrats or independents who lean toward the Democratic Party will vote for … any of the other potential Republican candidates.”

Strongly partisan voting patterns will mean the likelihood of a very close election this fall, regardless of which candidates the parties nominate. Compared to presidential elections of decades’ past, there are a limited number of states that will actually be competitive for either party. In the 2000 election, 12 were decided by five points or less; that number shrunk to four in 2012. There is still little reason to think that the 2016 election won’t come down to the same few swing states. (Some have argued Mr. Trump, the billionaire real estate developer who has alienated minorities and the Republican establishment alike, could be the exception and face a rout.)

This is the best argument against the claim that Mr. Sanders, if nominated, will be another George McGovern, the ideologically pure South Dakota senator who carried a single state against Richard Nixon in 1972. In the 1960’s and 70’s, just about every large state was competitive. A Democrat could win Texas. A Republican could win New York and California. In 2016, it would be almost impossible for Mr. Sanders to lose major states that have backed Democrats over the past few cycles, alleviating the possibility of a McGovern-like landslide.

If we know Mr. Sanders won’t be demolished, how do we know Ms. Clinton, who is selling herself as the Democrat with sanity, will be able to do much better against a Republican? For Clinton supporters, what does it say about your candidate when a 74-year-old from the second smallest state in America, a man with a passing interest in foreign affairs, just obliterated her in a state that she staked her comeback on in 2008?

The demographic arguments against Mr. Sanders for the primary are fair, and all the smart calculus has Ms. Clinton zooming past him in South Carolina. But let’s take a step back. Had a stronger progressive candidate from a far more consequential state thought about opposing her—Elizabeth Warren, anyone?—the vast Clinton apparatus may very well have been at DEFCON 1 by now. Mr. Sanders has myriad deficiencies as a Democratic candidate, including his vote against the Brady gun control bill and his support of the 1994 omnibus crime bill, a vote that could’ve proved fatal to his chances had Bill Clinton himself not signed it into law. Ms. Warren, elected to the Senate in 2012, has none of those blemishes.

Bernie Sanders is no one’s idea of an ideal Democratic standard-bearer. But what about Hillary Clinton, a candidate who just lost the millenial vote by absurdly large margins in two consecutive states? What about a candidate whose dogged surrogates dismiss these young people as pollyannas selling out the feminist cause but is staking winning the White House on getting these same people to vote for her in November?

Ms. Clinton’s game plan, in stark terms, is to undertake the same electoral path as Mr. Obama: mobilize nonwhites and younger voters in record numbers to capitalize on a demographic shift in the electorate that can’t come fast enough for a Democratic Party losing downballot races left and right. All the brilliant Robby Mooks in the world can’t change the fact that Ms. Clinton is a legacy candidate only six years Mr. Sanders’ junior running in a volatile climate practically engineered to reject such an endeavor. If anything, from this far out at least, Mr. Sanders appears no less suited to the task of knitting together the old Obama coalition.

Ms. Clinton does not promise change. She promises more efficient continuity—and who has really won that way? Barack Obama didn’t. Bill Clinton didn’t. Jimmy Carter didn’t. The irony of 2016 so far is that wild and woolly Bernie Sanders has proved himself the more savvy operator. He is relentlessly on message. His debate gaffes are minimal. He has been able to attack Ms. Clinton without sounding overtly personal or sexist, honing in on her bizarre decision to accept six-figure speaking fees before she ran for president again. (Every other prominent pol in modern history has had the good sense to cash out after their final campaign.)

Most important of all, as an op-ed in the Washington Post put it recently, there is no ambiguity about why he is running. His campaign is infused with an easily summarized, soundbite-ready purpose. This is the mark of a successful politician in any era, but is doubly important for the social media age. On the other hand, the quickest way you can sum up Hillary Clinton’s raison d’être is she’d implement the equivalent of President Obama’s third—and best!—term. Her campaign has yet to offer a compelling story for public consumption, and this is a problem. Young women don’t seem to care much that she’d be our first female president and this has never been at the forefront of her effort, anyway.

There’s also the whole issue with Ms. Clinton’s use of email when she was secretary of state being the subject of an FBI investigation. Mr. Sanders may not care, but Republicans sure will.

The greatest motivating factor Ms. Clinton may have going for her in the general election is fear. The GOP will stack the Supreme Court. They will obliterate Obamacare, torpedo immigration reform and turn the United States into a Man in the High Castle-style dystopia. For Democrats, she may be seen as the battle-tested combatant to stop this, and that could be enough.

Mr. Sanders is at least thrilling to a segment of the Democratic base and has some chance to recapture the support of white working class voters that Mr. Obama lost. In a country so thoroughly polarized, where swing states, let alone swing voters, are disappearing, what does Ms. Clinton offer that Mr. Sanders doesn’t?

She can stand up to a GOP attack machine? Sure, she’s done that, as has Mr. Sanders on a smaller scale, beating back millionaire businessman Richard Tarrant to win his Senate seat a decade ago.

She doesn’t call herself a socialist? Well, conservatives relentlessly derided Barack Obama, a black man with a peculiar name, as a socialist and he survived, though he did not own the term like Mr. Sanders. If Mr. Sanders lost to a Republican by three points or so, his socialist label would probably be blamed.

She has far more foreign policy experience? Absolutely. But Mr. Obama had virtually none when he defeated Vietnam War hero John McCain.

On paper, Ms. Clinton still looks like the stronger Democrat for November. The operative question for Democrats will be by how much.

In the pantheon of reasons to support Ms. Clinton, electability alone is falling further down the list. 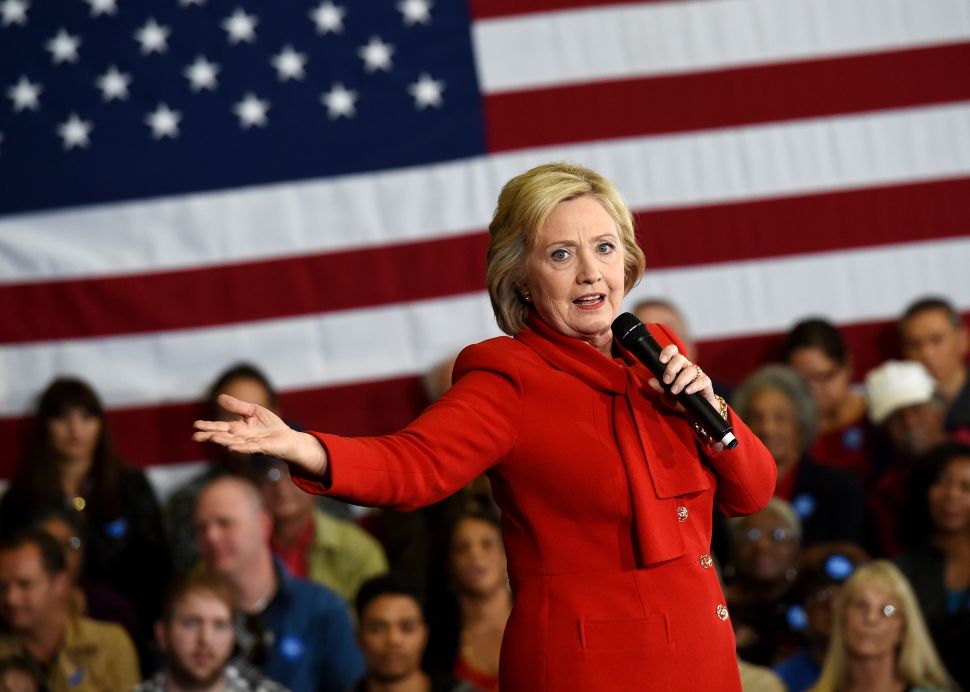