COLUMBIA, S.C.—Thanking the voters of Iowa, New Hampshire and South Carolina who soundly rejected him, Jeb Bush announced tonight he was dropping out of the presidential race.

“America is a country that thinks big, acts boldly and leads without apology. It will be up to the next president to restore that leadership,” Mr. Bush said at his campaign party in Columbia. “I’m proud of the campaign that we’ve run to unify our country and advocate for conservative solutions that will give more Americans the opportunity to rise up and reach their G0d-given potential.”

“But the people of Iowa, New Hampshire and South Carolina have spoken,” he continued. “I really respect their tradition so tonight I am suspending my campaign.”

Mr. Bush’s exit from the race was long expected but is stunning in its own way, if only for how far the son and brother of former presidents had fallen. The former Florida governor, despite the help of George W. Bush and Sen. Lindsey Graham, could not become a factor in the South Carolina GOP primary. The Republican electorate, angry and craving bombastic outsiders like Donald Trump, who without mercy taunted and belittled the “low-energy” Mr. Bush, turned their backs on a legacy candidate.

Mr. Bush began the race more than a year ago as an unequivocal front-runner. Mr. Trump was not on anyone’s radar. The former governor had a $100 million super PAC, in addition to the backing of many of the Republican Party’s elites.

He ran the sort of campaign that seemed tailor-made, given this peculiar and volatile moment in our political history, to fail. He was humble, championed immigration reform and touted his ability to speak fluent Spanish. He believed adhering to textbook conservative principles would electrify Republican voters across the country.

Instead, Mr. Trump roared onto the scene, and Mr. Bush, bespectacled or not, was quickly eclipsed. No one cared about his policy proposals, not when Mr. Trump, in classic schoolyard bully fashion, was routing him at debates and vacuuming up attention on the airwaves. Not when Mr. Trump vilified immigrants and started to say exactly what was one the minds of many Republican voters.

Though the Republican establishment still has hope in Sen. Marco Rubio of Florida, who was once something of an apprentice to the former governor, Mr. Bush was the original candidate of the party elite. He was expected to box out other candidates, especially Mr. Rubio. The opposite happened: more candidates piled into the race and Mr. Rubio humiliated his old mentor, vaulting to the top of the pack.

“With strong conservative leadership, Republicans can win the White House, and we can get back to being in the verge of having the greatest time to be alive and that’s what I honestly believe and I know you do as well,” Mr. Bush said tonight.

In another year, or decade, Mr. Bush might have been a formidable candidate. It was never meant to be in 2016. 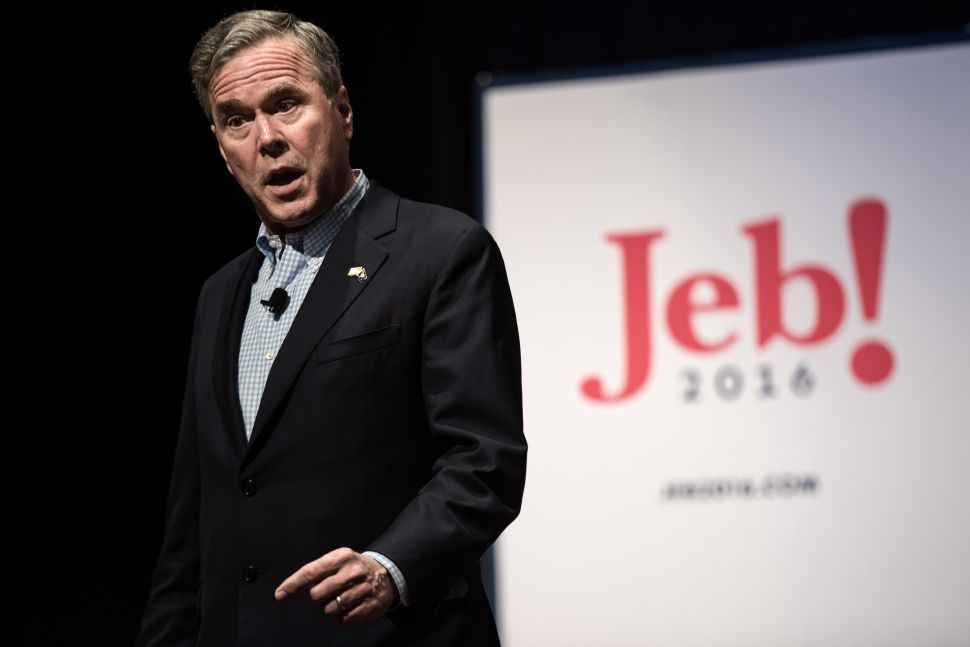