NASHUA, N.H.—With the fate of his presidential campaign in the balance, Gov. John Kasich of Ohio was in a philosophical mood.

“I’ve been set free. I can do what I want, say what I want, feel what I feel in these town halls. I think people want to know you care about them,” Mr. Kasich told reporters outside of a polling place here. “The conservative message is good and critically important, but I think there’s another element of it. I think there’s a sense that, you know, this guy seems to be able to say and do and tell us the things that are deep in his soul and I think they relate to that.”

Mr. Kasich, sounding almost wistful, said this was the “right time” in his life to run for president. “This is kind of the right time in my life for all of this. If it had been ten years earlier, I don’t know, or ten years later it would’ve been too late.”

Mr. Kasich has held more than 100 town halls in the Granite State and is hoping his relentless campaign schedule pays off in a crowded Republican primary. Many pundits see the Ohio governor, along with Sen. Marco Rubio of Florida, Sen. Ted Cruz of Texas, Jeb Bush and New Jersey Gov. Chris Christie in a war for second place behind Donald Trump, the celebrity billionaire who has dominated poll after poll. Though Mr. Kasich is a more understated presence on the trail, he is a relative moderate in the field and the kind of no-frills candidate New Hampshire voters have been attracted to in the past.

This media narrative, as a fight for second place, does not frustrate the Ohio governor at all.

“I have not one degree of frustration,” Mr. Kasich told the Observer as a gaggle of supporters looked on. “The only time I really get frustrated anymore is when I get to 18 and I don’t hit it on the green and I make a bogey and maybe lose to my friend. That’s about it.”

New Hampshire allows registered voters to participate in either the GOP or Democratic primary, making for a fairly unpredictable election day. Mr. Kasich said today he ran into a voter that was torn between himself and Sen. Bernie Sanders of Vermont, an independent running in the Democratic primary.

“Somebody told me today they wanted me to do well even though they were voting for Bernie,” he recalled, as snow fell lightly. “I said, ‘Well don’t vote for Bernie, vote for me.’ And she said, ‘You’re too young.'” 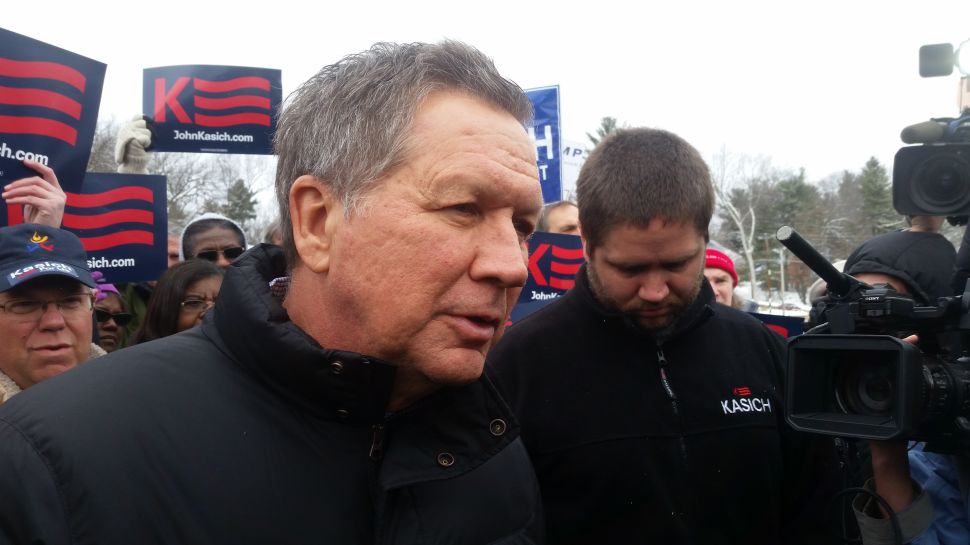