The eyes of Executive Producer Ryan Seacrest beat down upon the decay of the American Dream, as Jonathan Cheban and Kim discuss how Caitlyn’s stance on gay marriage has been misconstrued by Ellen Degeneres, the Tom Buchanan of our tale.

Kourtney’s eyes beat down upon Kim with an equal amount of disgust as she eats a Fruit Rollup.

My eyes beat down in disgust as Khloe reveals that Lamar can’t be left alone with his nurses in the hospital because they keep asking him for photos.

But even though we see our dream is dead, we come back to the green light: Kendall is walking in The Victoria’s Secret Fashion show. But as Kylie is quick to point out, she’s still not technically an angel.

Kendall doesn’t want her family at the fashion show because her family is super embarrassing and I completely understand.

Kris wants a cool jacket. She’s looks at it on an app. I’m so relieved because there hasn’t been a word about apps on this show in WEEKS.

Kim reveals that Kris’s party is going to be Great Gatsby-themed. I wonder how much this theme is based on their knowledge of the book or based on seeing this gif of Leonardo DiCaprio on Tumblr and really digging the aesthetic. I’ve read it and would honestly prefer a party based on the latter.

Caitlyn has a birthday lunch and it’s boring. She deserves to have a boring birthday lunch that her children feel obligated to attend like any other 66 year-old woman. Good for you, Caitlyn.

The ladies film the music video for their mom’s party, but Kylie is visibly not feeling it. She’s having problems with Tyga. Me too, Kylie. Me too.

Kylie storms off crying because her sister just responded to her real problem with the same amount of clarity as Pootie Tang.

We get a nice taste of pregnant Kim fat-shaming from her mom and her best friend, an expired Chobani yogurt cup. She should be happy because last pregnancy she looked like Jabba the Hut. Yogurt’s words, not mine. With friends like these, who needs friends?!

Kris confronts Kim because Kim told Caitlyn about the Victoria’s Secret Fashion Show. Guys, Kendall doesn’t want anyone attending! Kris will only be there backstage the whole time, drawing zero attention to herself. Right?

That night is Kendall’s birthday party, because we live in “The Great Gatsby” and there’s nothing but parties. Kylie is all, “Tyga? What Tyga?” when it begins but by the end she’s all like, “I wish I had done everything on Earth with you. Specifically, an elaborate Snapchat story.”

The next night is another party, THE party, Kris’s 60th. As the the women get ready Khloe gives them a 7th grade history lesson about how in the 1920’s alcohol was illegal and that’s why they had big parties? I think? Kylie raises her hand like a diligent student and asks, “Did they have lip injections back then?” No, really. She asked that.

Caitlyn calls Kendall and Kendall proceeds to drag her across the floor for announcing that she’s attending the Victoria’s Secret Show. Guys, Kendall REALLY doesn’t want anyone in her family there!!! Much like Gatsby, she wants to escape her past. Kendall keeps things on theme and I appreciate that.

We get to the party, anyone who’s anyone is there. Boy George. Kyle Richards. Kris’s own son. Just kidding, he’s not there!

We watch the beautiful video her daughters made her and just as Kris begins to give her birthday speech, Khloe grabs the mic in true Kanye fashion, except she’s not even gonna let her finish. Oh yeah, Khloe is hammered because people keep asking her about Lamar.

Everyone is annoyed that Khloe ruins Kris’s moment, except Kourtney who is slowly becoming my favorite sister by wearing a suit and saying, “Thank God Khloe cut off my mom’s speech because I was getting bored of it.”

Kanye and Charlie Wilson perform. Kanye just keeps rapping, “Kris, we love you!” So like, Mark Zuckerberg, where’s that money?

“So we beat on, boats against the current, borne back ceaselessly into the past.”

This episode felt just like reading the great American novel. You can even end it the same way. With our hero, dead in a swimming pool. 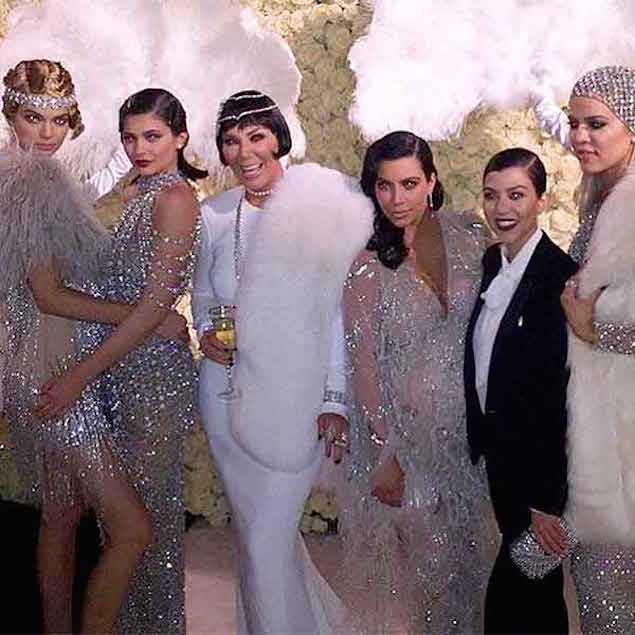