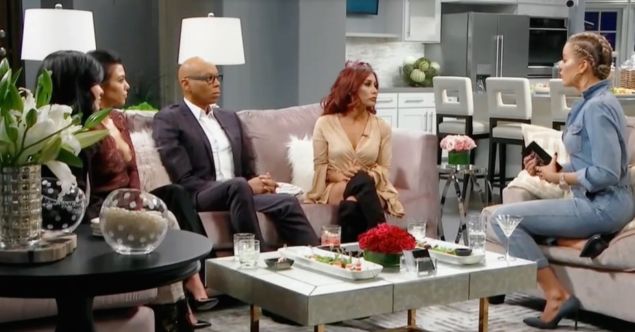 Another week, another day spent drinking kocktails with Khloé Kardashians and her multi-millionaire affiliations (and anyone else her team decided to book). This week Khlo-Money was joined by Kourtney Kardashian, Kylie Jenner, Sean Combs, Morgan Stewart, Nicole Polizzi, and RuPaul for some fun (ish) and games. Kan the kocktails withhold their charm or is there just too much kuraçao for us to handle?

Kylie and Kourtney are sat at the breakfast bar in Khloé’s kitchen.

Sarah: Kylie has expressed more emotion on this show so far than she has ever on KUWTK.

Nellie: Kylie is accusing Khloé of luring people in with hidden cameras which is probably how she felt growing up on KUWTK.

Sharone the bartender’s kocktail of the week is called “I Woke Up Like This” which is funny because Beyoncé and the Kardashians hate each other. Sean “Diddy” Combs enters wearing double denim and a mission to promote his already overly promoted drink Cîroc.

Sarah: As if Diddy is using this show to promote Cîroc.

Nellie: No one does product placement better than the Kardashians.

Sarah: It’s not as if he gets enough attention from Khaled.

Nellie: Where is Khaled’s kocktail show? That’s what I wanna know.

Sarah: I love that Khloé has kickstarted the compliments and they’re actually talking about Flint.

Khloé starts talking about Diddy and Bowie’s different personas and she references Khlo-Money yet again.

Nellie: Snaps to what he’s saying about the confidence to change personas.

Diddy talks about his brunches for female CEOs.

Sarah: OMG Diddy is for the empowerment of women.

Nellie: All I want is an invite to these brunches.

Kourtney describes getting punched in the face at one of Diddy’s parties.

Sarah: Kourtney is a badass.

Nellie: She can take a punch in a club bathroom and decorate baby nurseries with the best taste. Is there anything she can’t do?

Sarah: And she can throw the perfect shade.

Nellie: I wonder how this is gonna compare to the Kim pregnancy call.

Nellie: She is a master.

Sarah: ):I love the fake glass WOBBLING on the door when she knocks.

Nellie:  That is a very aggressive knock, you would think she’s the police.

Nellie: Snooki is literally the epitome of every Jersey mother I’ve ever met. She’s somehow turning her flipping of a shore house into a charitable endeavor.

Sarah: I’m unfamiliar with the stereotypes but I’m buying it.

Nellie: Like “look at all the good I’m doing through my shady real estate ventures”.

The guest play a game called Khlodora’s Box where they have to put their hand inside a box and guess what the object is that they’re feeling. The object is related to a subjectively “funny” story from their lives.

Sarah: You didn’t put those wet towels in there Khloé, your producers did.

Nellie: Kylie’s life is so mundane—I was in a rolls with harry styles, he dropped a red bull on my crotch: that’s the story.

Nellie: This is such a stupid story but I am riveted.

Snooki talks about balancing her personal time and attention spent on the kids.

Sarah: Is her daughter called Rolex or Relax?

Nellie: I can’t tell but either is fitting.

Sarah: I love that she is unafraid to pick on her brother-in-law.

Nellie: I always thought they had signed an NDR and gag order about Kanye.

Sarah: I think he’s more chill than he lets on.

Nellie: This is truly a drunk mess god bless they haven’t achieved this in two episodes

Sarah: Snooki and Ru are both KILLING IT.

Nellie: RuPaul was the MVD (most valuable drunk) here.

Nellie: “Who says the black folks don’t get nominated for anything” HOLLY SHIT RU.

Sarah: Khloé just celebrated this diverse world, this is such as 2016 show.

And the Best Drunk award goes to…

Nellie: I think we can just give it to RuPaul here.

Sarah: He wasn’t as good as Kym Whatley, so I’m feeling 7/10 kocktail umbrellas. 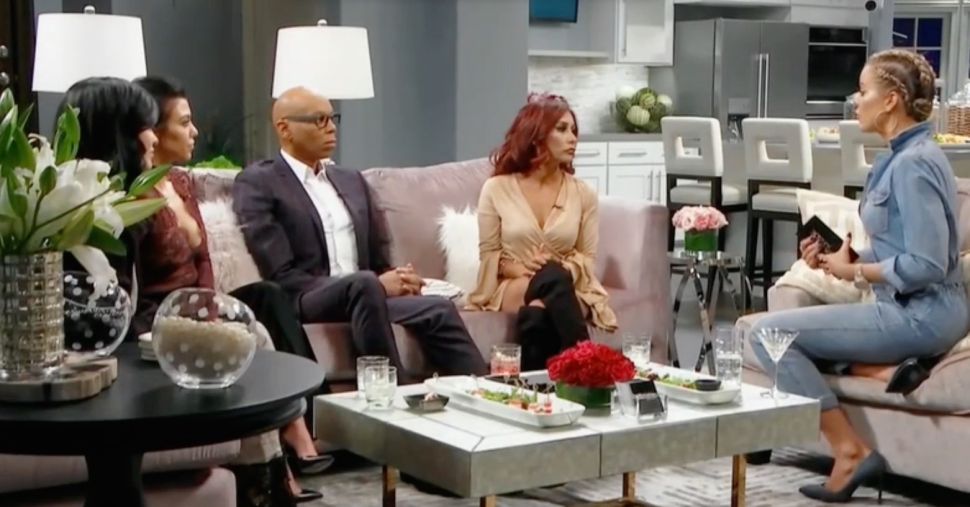