“And on the 4th episode, God smiled upon Khloe and ordered 15 more episodes of her show”—The Bible, probably

Yes, you read that correctly – Khloe has overcome the Kris Show curse. While Kris’s show lasted for a measly 16 episodes before the pulling of the plug, Khloe seems destined for more success. Was it Snoop’s insightful commentary on both cannabis and the Oscars controversy? Was it Kendall’s halfhearted prank call to Kim? Or was it this very column, dedicated to simultaneously shading and celebrating the Kardash clan?

Per usual, Khloe assembles a crack team of reality show personalities, music bigwigs, and internet randos for her 4th episode. Where can she possibly go from here?

Sarah: Velvet and Stone sounds like the name of a furniture store Kourtney would splurge at. Also WHO IS THIS SOCIAL MEDIA STAR? I FEEL SO OLD

Nellie: I LITERALLY HAVE NO IDEA. At least bring someone cool like Deray Mckesson you know?

Khloe herds the guests into the kitchen island, where they discuss Sonja’s many business ventures including restaurants and wine.

Sarah: “Tipsy girl” is a bad name for a wine.

Sarah: NOT EVEN KHLOE KNOWS WHAT THIS BOY DOES . . .ohhhh he’s a Viner.

Nellie: Khloe explaining what Vine is . . .here she is, our Kardashian social media expert.

Sarah: Did Ne-yo take these from an optician’s?

Sarah: No I love it. He looks cute.

Nellie: I love that his fiance proposed to him. Khloe always includes one socially progressive man per episode.

Khloe, in between sips of Velvet & Stone, solicits Ne-yo’s opinion on the Oscars diversity controversy.

Nellie: :I can feel Stacy Dash slowing retreating back into her lair. OK Real Housewife maybe needs to shut up here. Ne-yo is like “ . . .anyways.”

Sarah: Real Housewives always have to voice their opinion. I like that Khloé fucking listens and doesn’t interject

Nellie: Me too, this is active listening and bringing in people who actually have a stake in this convo.

Sarah: Tori Spelling tho, who decided to book her? Did they run out of a budget?

Nellie: What does she even do anymore, except guest star on the new 90210?

Sarah: Reality TV and psychic hotlines.Okay dude – these people doing the dab is embarrassing. :Like they even manage to mess up THE SIMPLEST DANCE MOVE.

Nellie: Ne-yo is so gracious and patient. He doesn’t even walk off the show which would have definitely been my move.

Sarah: Tori’s face looks like rubber and I can’t tell if that’s just her face or cosmetic work. Like a rubber lion.

Nellie: I think that’s when you just have a mixed up matte makeup routine. But can we take a second to celebrate Khloe’s booty in this ep?

Nellie: Tori’s take on stepmothering is pretty inspiring. And her take on anxiety – “the more we worry the more our fears become reality.” DEEP.

Nellie: THE MIXED FAMILY DIALOGUE. I’M STANDING UP AND APPLAUDING. This entire night is really highlighting Khloe’s transformation into the resident Kris. :Like she is mother hen-ing this situation, making everyone dab to make everyone feel included.

Sarah: No matter how painful. If it was a Kris Jenner party there would be fire breathers and a photo booth.

Nellie: It’s only season 1, Sarah. Give her time.

T-Pain bursts through the door, the final and perhaps most anxiously awaited guest of the night. He begins a running description of his decision to pee in his Uber on the way to Khloe’s, his autotune-free new album, and more.

Nellie: He peed in his uber? The height of bourgie rebellion.

Sarah: RIP autotune. But it becomes gimmicky innit! He looks cute in his glasses and gold chain.

Nellie: He’s so jolly. I don’t know how else to describe him – like a Christmas movie character. Also Khloe mentions WATCHING HIS NPR VIDEO?? SHE LIKES NPR??

Sarah: He’s lighting up the room. I’ve seen that video too. Khloe is klassy.

Sarah:: Ne-yo, this masterpiece better be amazing. Ne-yo is the star of this entire day.

Sarah: THIS SONG IS A HOT MESS. And it’s not even done yet.

Nellie: Look how patient he is for a Grammy winner.

Sarah: Of course the Vine star is making a Vine of this. T-Pain’s falsetto tho.

Khloe announces the final game of the night, Khloathalon. It is suspiciously similar to regular charades.

Sarah: Khloathlon, they really but her name on the front of EVERYTHING.

Nellie: Yeah I think it’s highlighting her ability to be the super fun if clueless friend. Like the one who is bad at planning events but turns up when they’re there.

Sarah: And has a lot of SPIRIT.

They all retreat to the kitchen for a final discussion about – what else – sex.

Nellie: Did Sharone even make those?

Sarah: The producers. With Kris Jenner screaming at everyone.

Nellie: I did not need to hear about T-Pain’s sexual experiences.

Sarah: T-Pain is a DOGGER.

Nellie: At least he hides all the sex toys so his kids can’t find them.

Sarah: Maybe he has a special safe for them.

Nellie: Also how Sonja’s kinkiest thing is having sex in a Nantucket vacation home hammock.

Sarah: With a glass of Dom Pérignon in hand. T-Pain is getting honest. This is like celebrity therapy.

Nellie: I feel like they talk about it in the same way my friends do when they come to a pseudo-conclusion about their lives.

Sarah: Well then Khloé has succeeded in making this a REAL GIRL’S NIGHT.

After commencing a game of “Truth or Dare,” T-Pain is challenged to freestyle about the person to his right – a horrified Tori Spelling.

Sarah: :Ne-yo is so HAPPY AND SWEARY. He is SO HAPPY about this night? Of ill-tuned songs and bad kocktails?

Nellie: :He’s already a dad, overexcited by basic nights out. TORI IS SO HORRIFIED BY T-PAIN’S RAP.

Sarah: T-Pain is a BAD FREESTYLER.

T-Pain starts to rap about Tori Spelling, she looks terrified

Nellie: Honestly I would probably be flattered if T-Pain freestyled about me.

So who wins the coveted Drunk of the Night title? How many kocktail umbrellas have they secured?

Sarah: Oh T-Pain, you charming bastard. I think I’d stretch to 6. Also lol if these are the guests they have on the fourth episode then who the fuck are they gonna book for the rest? I WANT DRUNK KRIS JENNER.

Nellie: I think they’re saving kris for the series finale.

Sarah: Because srsly, she would sabotage the hell out of the show and embarrass the shit out of Khloé. 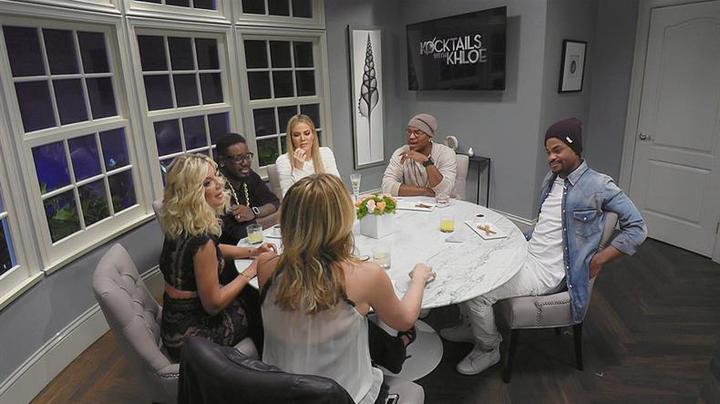