UPDATE (February 19, 2016, 5:06 pm): In a message posted on its Facebook page, Lamar Advertising has made the decision to remove the billboard advertisement. This decision was made public hours after the Observer published this story by the Haym Salomon Center’s Paul Miller. The Baton Rouge based company said, “We have tried to contact SEAMAC to discuss these issues but have not received a reply to our telephone and email messages. Therefore we have decided to remove the SEAMAC copy as soon as possible.”

Sponsored by the Seattle Mideast Awareness Campaign (SEAMAC), the sign reads, “Boycott Israel Until Palestinians Have Equal Rights.” Part of the anti-Israel Boycott, Divestment and Sanctions (BDS) movement, the display has captured the attention of Chicago area residents and supporters of the Jewish state across the country. This has led to a growing social media campaign condemning Lamar Advertising, owner of the advertising space, for accepting the ad that is regarded as anti-Semitic by many in the Jewish community.

“The billboards bring us back to one of the darkest moments in history, when Jewish businesses were boycotted. Boycotting Israel is the new face of that old disease: anti-Semitism. Make no mistake. Boycotting Israel is classic anti-Semitism with a “Zionophobic” twist, said Peggy Shapiro, Midwest Coordinator for the anti-Semitism watchdog group StandWithUs. “What it exhorts is that Israel and only Israel be singled out, and that the Jews and only the Jews be denied their right to self-determination. The boycotters’ message is one of hate; their strategy is misinformation, and their tactics are evident on billboards, college campuses, and social media.

With the hashtag #boycottlamar bringing attention to the issue on Twitter, and Facebook users sharing the company’s phone number on their pages, Lamar issued a statement on social media to explain their position:

“We have received a large number of social media comments and hundreds of telephone calls concerning a billboard in Chicago sponsored by the Seattle Mideast Awareness Campaign (SEAMAC). The advertisement suggests that people should “Boycott Israel Until Palestinians Have Equal Rights.” It is important to understand that this is a message from SEAMAC and not Lamar Advertising. Lamar has been in the billboard business for over 100 years and we have developed a strong commitment to supporting the First Amendment right of advertisers who wish to use our medium to promote legal products and services or to convey noncommercial messages such as the one in Chicago. We do not accept or reject copy based upon agreement or disagreement with the views presented. We think SEAMAC has a right to present their views and would also support the right of those who disagree with SEAMAC. We welcome your comments.”

Lamar’s “First Amendment” argument is not sitting well with many, including some advertising experts.

Ms. Galili continued, “As a seasoned CPG marketer who has spent millions on out-of-home advertising, it is well known that advertisers have every right to reject creative [content]. Lamar Advertising chose not to—just to make an extra buck. Instead, very cowardly, they use the First Amendment of free speech as the excuse. Really? So…if my company came out with a billboard shaming Lamar Advertising, would they post that too? Lamar Advertising #fail.”

The phone call bombardment to which Lamar is referring reflects the views of more than just a few on social media. When Rabbi Uri Pilichowski of the National Council of Synagogue Youth and Scheck Community Hillel School in North Miami Beach, Florida was made aware of the billboard, he immediately emailed his students, alerting them of the “Boycott Israel” campaign.

“As an American Jew, I fear that the demonizing and baseless accusations this billboard promotes have the potential to increase anti-Israel and even anti-Semitic sentiments within America, a trend we cannot tolerate,” stated Jonah Rose of NCSY. “I called Lamar Advertising to insist they remove the billboard immediately, but, like many of my peers, I was directed to leave a voice message. No representative of Lamar Advertising seemed willing to have a conversation about the billboard.”

Denise Rayek of Scheck Hillel Community School told the Haym Salomon Center, “When I saw the billboard I was devastated, and right away I knew what I had to do. I believed that Lamar Advertisement would be open to hearing my call. But no—my call went straight to voicemail.”

Lamar Advertising is not new to controversy.

In 2012, they came under fire for their involvement in an anti-Israel campaign in Denver. Handling the advertisement for the Regional Transportation Division, billboards on the sides of buses called for an end to foreign aid for the Jewish state.

That same campaign appeared three years earlier in Albuquerque, New Mexico. According to The Coalition to Stop $30 Billion to Israel, they entered into an eight week agreement to run ads on signs hosted by Lamar, but the company cut the campaign short after pressure from anti-Semitism watchdogs.

In a report published by the anti-Israel website Mondoweiss, “The design of the billboard had been approved by Lamar and the billboards’ wording and final image were suggested by Lamar’s graphics designer.”

Calls to obtain further comment from Lamar Advertising have not been returned. 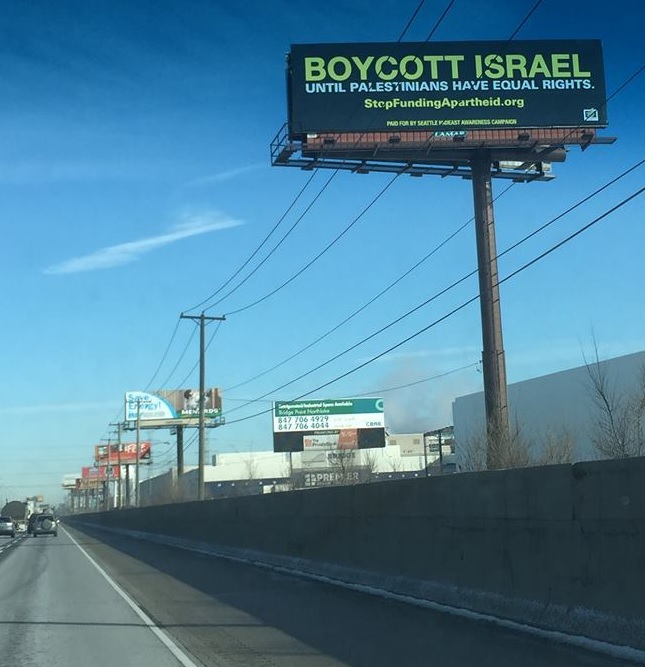