Three times a loser to Lance, with his closest challenge coming in 2014, Larsen is a supporter of Texas Senator Ted Cruz, who won the Iowa Primary.

Lance backs Christie, whom most Republicans when quizzed off the record figure will flame out post New Hampshire. GOP sources hope that Florida Senator Marco Rubio will use momentum out of Iowa to position himself as that establishment go-to guy the party can put on the field to stop the anti-establishment twin menace of Cruz and Donald Trump.

But Lance serves a deep red congressional district, where Larsen is already revving his support for Cruz.

Lance movement conservative ally State Senator Mike Doherty (R-23) backs Trump and has the beginnings of an organization in place for the billionaire tycoon. Trump also has a big lead on Cruz in New Hampshire. If he is able to use that as momentum heading into the next wave of primaries, he may give Lance the lift the former senate minority leader needs to build a viable top-of-ticket ally.

But if Cruz edges Trump and has some pluck in him by the time New Jersey’s June Primary rolls around, will Larsen be able to parlay that into just the infusion he’s been looking for to put the hurt on Lance?

The congressman does have an alliance with former Bogota Mayor Steve Lonegan, Cruz’s point man in New Jersey. Larsen will have the argument that he was with Cruz from the beginning, but here’s another factor that may work in the congressman’s favor: Larsen’s campaign strategist King Penna backs Trump, not Cruz, potentially complicating the candidate’s own chest-out support for the Texan.

Larsen issued a statement on last night’s outcome, which read in part:

“Congratulations to Ted Cruz on his victory in Iowa yesterday and to Donald Trump and Marco Rubio for coming in a close second and third consecutively. As a GOP candidate, it was reported Ted Cruz voters exceeded the record of votes cast, so a second shout out of congrats are in order. He is truly a champion of conservative values and a man who, by actions, fulfills his word even at great political and personal cost. I believe he could be an exceptional President, one who will emulate Americas greatest contemporary President, Ronald Reagan.

“We are witnessing the voters disdain, disgust and mistrust of career politicians and establishment.” 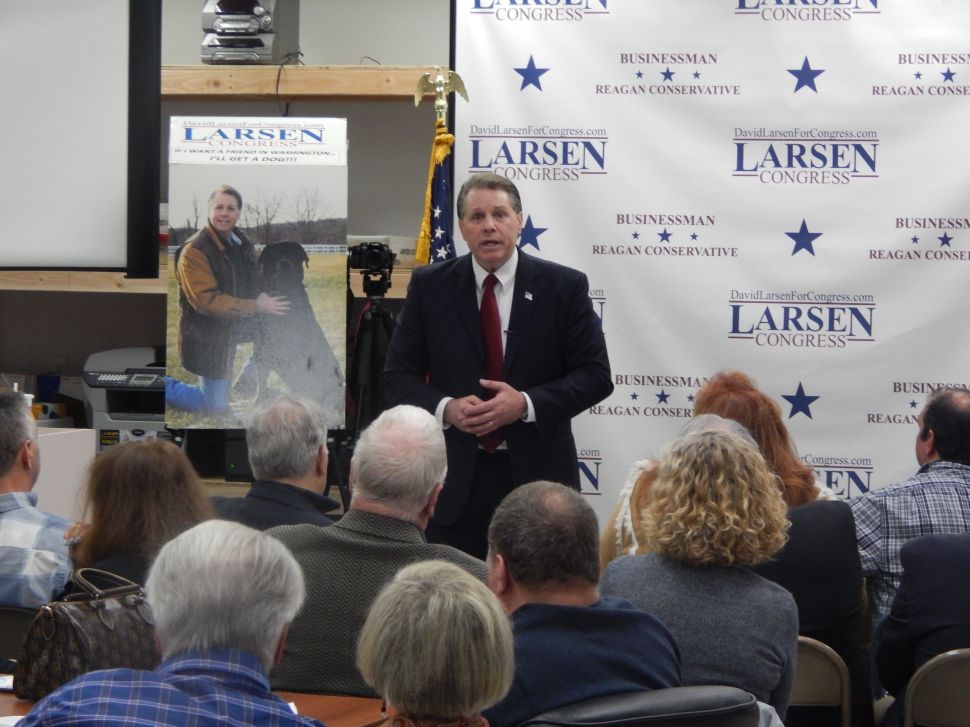