This episode of SVU sure felt like it was more than an hour – oh wait, that’s because it was!  It’s bonus time! Yes, it happened again – an SVU / Chicago PD crossover event!

In this one, the SVU detectives teamed up with the Chicago PD Intelligence Unit to hunt down a pair of serial killers when murderers Drs. Gregory Yates and Carl Rudnick decided to make a break for it.

It was Rudnick who did all the planning by enlisting the aid of Bronwyn Freed, red-headed mandolin-playing friend of the late Benson tormentor, William Lewis. Bringing her unique experience for helping prisoners escape, she baked tools, cash and a cellphone into some lasagna just for Rudnick.  Using the tools Rudnick chiseled a hole in the wall of his cell and covered it up with a poster ala Shawkshank-style. At the last minute, Yates, much to the chagrin of Rudnick, threatened his way into the escape plan and the two were on their way.

Rudnick was captured fairly quickly after Yates turned on him, shot him, and left him for dead in a boat docked for the winter. (The actual capture was eerily reminiscent of the takedown of one of the Boston marathon bombers.)

At the end of the first hour, Dodds and Lindsay were in hot pursuit of Yates in a wooded area when shots rang out. Dodds reeled as he took a bullet while Lindsay sprinted off into the thatch of trees. After a prolonged footrace, Lindsay lost Yates, but she knew instinctively that he was on his way back to Chicago. Driven by the fact that Yates killed her friend Nadia, Lindsay vowed to bring him down.

Once in the windy city, Yates continued his killing binge, murdering several young nurses all of whom resided in the same apartment building. (For the real life version of this spree, Google the name Richard Speck.)

Throughout his run, Yates kept taunting Lindsay via phone calls and notes left at crime scenes. Her superior, Lieutenant Voight, obviously concerned about her safety as well as her sanity, demanded that she remain within the confines of the station house during the manhunt.

As the outrageous behavior of Yates continued, the team, now with the help of Lieutenant Benson who’d flown in from New York, figured out that Yates had a complicated backstory and was acting out because he was still pissed that he was given up for adoption as a child. His mother realized that her young son was a psychopath and when she was pregnant with his little sister she made the decision to sever ties with him.

The final showdown occurred when Yates sent everyone, except Lindsay, on a wild goose chance. As he held his father hostage, Lindsay found him and watched in horror as he killed his father in front of her. When Yates came at Lindsay with an ice pick, almost begging her to kill him, she fired her weapon and took him out.

In the aftermath, Lindsay struggled with how to handle her emotions given what she’d just been through. In the final scene, she’s counseled by Benson, who all will recall endured a similar situation with Lewis.

While it may have been at its core an ‘event’ to get ratings during the February sweeps, this expanded episode combining the two series was more than that. It showcased why these crossover episodes work and will continue to satisfy going forward.

Both series stayed true to their foundation while melding together to tell a story that wasn’t outrageous or unbelievable in terms of these series. Looking at it as one long storyline, it had personal moments for both teams – with Benson confronting Bronwyn and Lindsay dealing with Yates’ obsession with her – as well as plenty of action.

It was great to see Lindsay sort of channeling Benson in her desire to use Yate’s passion for her to draw him in. When she said to Voight, “Let me be bait. Let me do my job,” it was similar to some of Benson’s actions, both in her early days dealing with sly real estate agent Richard White, and in her final encounter with serial killer Lewis.

Voight’s assertion that it was good to have Benson there for Lindsay seems a bit of an understatement. Benson, because of her tenure with the force, brings a wisdom and guidance that is an asset to any squad. This sort of begs the question as to why there is no mature female in the Intelligence Unit currently. Yes, there’s Sergeant Platt (who is awesome!) but she’s a desk Sergeant. How about we work on that, huh?

Platt’s work in this episode was one of the other great things to come out of these crossover episodes; that regular viewers of one show get to know the folks from the other show. PD people sure got to see some great moments from Rollins and Carisi while SVU folks were exposed to the greatness of Amy Morton, er, I mean Sergeant Platt and the rest of the Chicago crew. It was also fun to see snippets of Chicago Fire and Chicago Med as well, with Fire Chief Boden and Dr. Ethan Choi making quick appearances. Sadly, although Fin made the trip to Chicago, he didn’t appear to have too much to do. This also might lead people to wonder who was running things back in New York while Benson and Fin were in Chi town. With Dodds no doubt recovering from his wound, does that mean Rollins and Carisi were in charge? Now that would have been interesting to see. Too bad there wasn’t a quick scene to show that.

Wrapping up the two hour episode, it was nice to see a slightly softer Voight admit that he likes it when Benson is in town. And, while it would have been really enjoyable to see the two of them finally have a night out on the town away from work, it was the right storyline move to have Erin and Olivia at Molly’s discussing work and life and how to balance the two when your job is catching vengeful serial killers.

It was very true to character to have the usually stoic Lindsay admit that in the aftermath of all of this that she’s not sure how she’s doing. If she’s anything like Benson, and I think we all suspect that she is, this will undoubtedly have a lasting effect on her. How this will change her going forward will certainly be interesting to watch.

That brings to a close another Dick Wolf World crossover event. It’s a safe bet that there are sure to be plenty more in the future. With Chicago Med gaining a renewal for next year there could even be a quadruple crossover coming soon.  And, we’re not done yet! As Chicago Law is in the works, an extremely ambitious FIVE show event could actually happen. When will it end!? If Mr.Wolf has anything to say about it, not anytime soon. 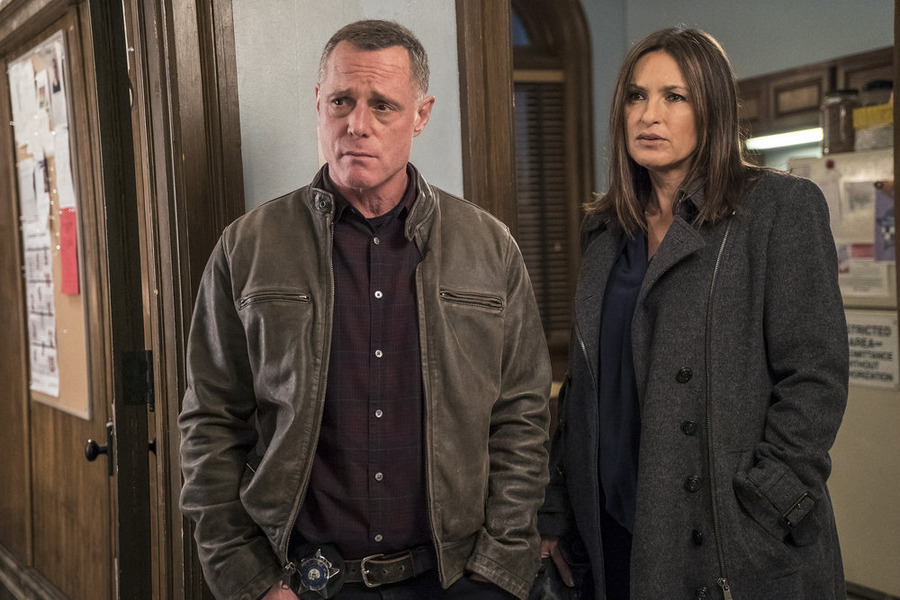