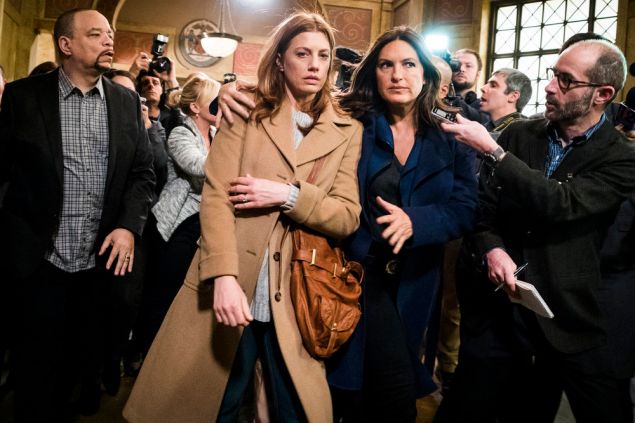 There are a lot of emotional stages to travel through when something completely unexpected happens — shock, denial, more shock, and finally, after realizing that there’s no going back, that things will never ever be the same, reluctant acceptance.

There was a tiny bit of that in this episode when a boxing champ turned food hawker named, interestingly enough, Teddy ‘Brown Sugar’ Hawkins, was brought in after he was on the verge of assaulting an undercover officer. But, like many criminals he tried to bargain his way out of the charges by offering up something bigger – a ring of pedophiles.

Cut to Fin, Rollins and Carisi tracking folks online and then bursting into their residences to arrest them.

When they happen upon a septuagenarian who seems to have only a black and white TV and no computer, they latch onto his neighbor who is using his modem. That person turns out to be someone familiar to the SVU team.

It’s a bit shocking when ADA and staunch children’s advocate attorney Pippa Cox opens the door to said apartment. But it’s not her they’re after, it’s her husband who’s currently online and is shockingly revealed to be Deputy Commissioner Hank Abraham. Abraham has been a frequent visitor to the squad room for the past few seasons, always chiding the detectives about their work.

In fact, earlier in the episode, Abraham had been gloating to Benson and Barba about the capture of Hawkins, wanting to make a big show of his arrest with a perp walk for the press. Now Abraham as a suspect is suddenly upset about the implication of police cars in front of his building.

Boy, when the mighty fall they fall hard. Unfortunately in this instance, Abraham wasn’t the only one to tumble. His actions also obviously affected Pippa and their two kids.

While this tale was about extreme hypocritical behavior, something that sadly isn’t unfamiliar in our society, it was also a thought-provoking look at what happens to friends, colleagues, and most importantly, family, when a horrible crime is revealed.

There might be some debate about the way that the detectives treated Abraham given that even after clear evidence was collected that affirmed he did indeed possess child pornography they didn’t handle him as they would have any other suspect, forgoing handcuffs, etc.  What won’t be debated is the manner in which the effect on his wife was portrayed.

It was tough to know exactly how to feel for Pippa. Most people would surely think that she had to know something, or at least have suspected something at some point. But this is where knowing both of these characters from previous episodes helps tell this story in a very believable manner. Regular viewers know that Pippa is no pushover and if she had suspected something she would have done something about it. She is as upset with herself for not seeing it as viewers are.

And let’s be honest, this is something that happens all the time – something shocking is revealed about someone and never in a million years would we have thought this person capable of whatever egregious thing they did. Every one of us has had this happen. Take a minute right now and think about it. There, you came up with a memory, didn’t you?

How did you feel about that? Now imagine it was your husband; a man with whom you had two children and had built a life with.

All of this is what makes Pippa’s initial denial so understandable. And, when she finally does admit it to herself, and out loud to Olivia, that her husband actually did these things, her breakdown feels incredibly real.

Hank for his part is in denial that he’s actually been caught, and like many criminals who’ve gotten away with something for a long period of time, he still thinks he can get out of this unscathed. He tries several tactics, including the ‘I’m sick and need rehab’ method of reasoning, but all for naught. In the end he’s going to jail.

Although he seems to receive a relatively light sentence, right? If he had that much stuff on those flash drives shouldn’t it be a much longer bid?  And there was a mention of protective custody. Why exactly? He committed the same crimes as other regular men, men who’ve not held office and they’re housed in gen pop (generation population). Is this special treatment? It seems like any other perp in a similar situation would have had it much worse. In fact, Abraham’s crimes seem much more offensive given that he was an officer of the law, so shouldn’t his punishment be harsher than that given to the average Joe? Let the debate about this begin. It seems a bit like this is the exact point intended in this narrative. How is the law applied differently to different people?

As Abraham was taken off to prison, there was finality to this case, but it would be quite interesting if Pippa were to reappear somewhere down the road to give viewers a glimpse into how she’s rebuilding her life after this. Hopefully that will happen.

In other things going in this episode, as the wounded mini-Dodds rehabs his injury, his Pops the Chief encourages him to take a different position and move away from the SVU squad. When son Mike stands up to his father and says he wants to stay where he is, the elder Dodds is upset. What repercussions this decision has for Mike, his job and his relationship with his old man will be interesting to watch.

It was fun to see Rollins getting her work groove back with a quick undercover assignment (although she really never lost her groove, right?) and how about the way Carisi interviewed young Jordan Abraham? We all know the guy seems to have his sights set on being a lawyer, but it came across pretty clearly that he’s getting very good at the job he has right now. It’s funny to say given how he came into this position, but that squad room needs a guy like him – a little too naïve to know better about certain things, but savvy enough to understand what needs to be done and how best to do it.

And how about that final scene? It’s amazing and a bit ironic that a simple ‘tuck’ of the arm revealed that something’s happening between Olivia and the long despised Tucker. Whaaaaat?! Whatever it is, it will certainly be fascinating to see how this plays out, especially given the loooonnng and often rocky history between these two.

It goes without saying (and yet, I’m saying it!) that no matter exactly how this relationship progresses there will be plenty of emotional stages that the fair Olivia will travel through. What exactly those stages will entail will be is one of the things that will make the back half of season 17 intriguing to watch. Oh yeah, along with those criminal cases as well. 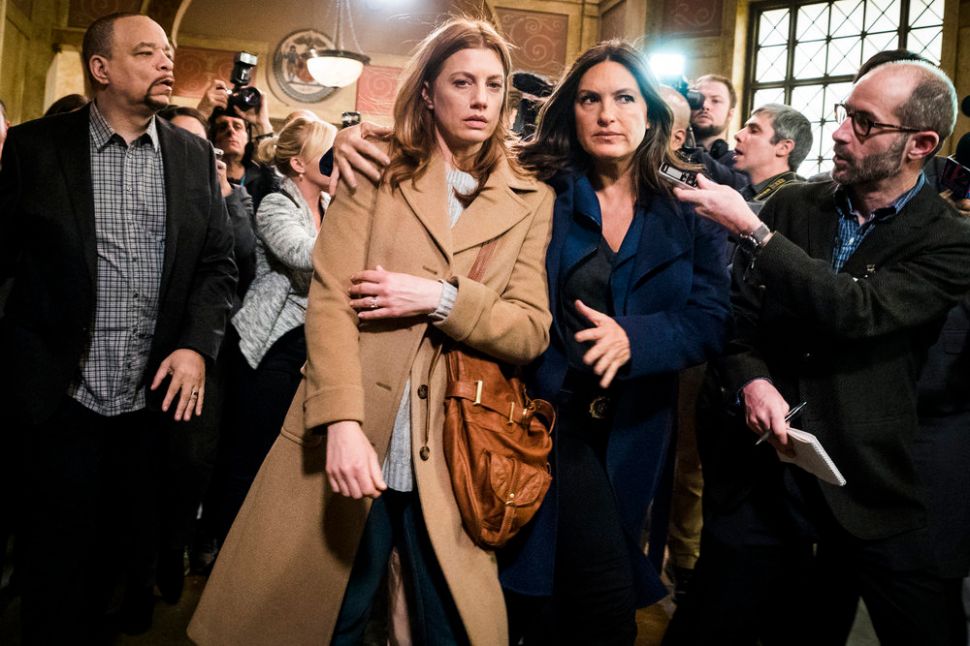