Jane Austen’s classic tale of the tangled relationships between lovers from different social classes in 19th century Britain is faced with a new challenge—an army of undead zombies.

Stepping into the corsets of the steadfast Miss Elizabeth Bennet is English rose Lily James, who lost her slipper in Kenneth Branagh’s Cinderella last year.

Born in Esher, Surrey, as Lily Chloe Ninette Thomson, she took on the stage name of Lily James making a name for herself with roles in Downton Abbey and War and Peace.

Studying the works of Austen at school in Tring, the 26-year-old actor is delighted to bring Pride and Prejudice and Zombies to a new generation of Jane Austen fans:

If Jane Austen came back from the dead as a zombie and watched this film, do you think she’d like it? I think she would! And you can bet that Jane Austen would be a fighter. If there was a zombie apocalypse, she’d be taking them down. I think she’d be proud that her wonderfully strong female protagonists are saving the men. I feel like Pride and Prejudice always needed zombies!

Is Elizabeth Bennet much changed in this version? I think that Liz Bennet is the most wonderful, forward-thinking independent character anyway, so having her in this world where she can fight and beat up Darcy was really liberating and fun. I love her for all her flaws, for her not understanding her feelings and not being able to connect to Darcy—all those things that are really lovable.

‘Every movie should have a zombie version. Let’s get them in!’

You carry the burden of most of the action scenes—can you talk about your training for this movie? We all trained really hard. I did a lot of fitness training, just to get myself really strong and get my stamina up for this role, and then I did boxing and started focusing more on martial arts when we were all together, the sisters.

You also do a lot of sword-fighting! I did a lot of sword training. It took a really long time to get good because it had to look really convincing, like we could really take care of ourselves and kill the zombies. I always had two swords and everyone had their own fighting style.

Were you injured during any of the scenes? Nothing that was too damaging, although I got quite a few bruises.

Any disasters on set? I had some issues with the extras sometimes. I accidentally stomped on someone’s head—I thought it was a dummy and it wasn’t. It was a real person. That was really bad. Also there’s a scene where I’m galloping up on the hill and they’re all running toward me—but they just didn’t run out of the way of the horse and I thought I was going to literally trample them. They were all so brilliant and it was dark and it was a hill, and I think you can see in the shot, I’m going, “Jesus Christ!” I was so scared I was going to trample someone alive on set! It was such a funny set to be on because everywhere you turned there’d be a bloody zombie.

It’s rare for an action movie to show the women saving the men, but that is what you do in this film. How do you feel about female empowerment? It’s fantastic to not be the damsel in distress or the girl next door or the wallflower who needs to be saved. It’s great to save the guys. We felt like a really scary version of the Spice Girls getting to kick some serious zombie ass.

What was it like interacting with the guys? Sam Riley, Jack Huston, Douglas Booth and Matt Smith? Terrible! Just joking. No, they were wonderful. With my character I got to interact with all the different men and they’re all so different but, again, having the freedom to be very bold with the scenes and eek out the comedy or the sexual frustration or whatever it might be. They’re such wonderful actors and we all are really good friends. It was just brilliant.

Were their fragile male egos bruised when you had to save them? No, the boys were loving it when we were doing all the fighting. They were super supportive and so into it. The slow-motion scene where us five girls are walking forward is one of my proudest moments, because I just watch it and go “Yeah, come on!” The guys were on the side-lines cheering!

There are so many good looking actors in this film! As the names kept being added, all these wicked young actors, I kept thinking, “Wow, wow, and wow!” We felt so invigorated by it.

And Sam Riley as Mr. Darcy. Those are big shoes to fill with the legacy of Colin Firth? Sam is so deep and vulnerable and arrogant—and sexy! I think he’s such a great Darcy and I had so much fun working with him and he brought so many unexpected things to the role. I didn’t know he would be that good at fighting and he was so good and really kind when I punched him. He was very patient.

How was it working with Lena Headey, who we all know from Game of Thrones? She’s a strong character, and we had such a great time although she was only in for a short time to shoot her stuff. She’s a real legend—what an incredible woman, and so fun too. I love how brilliant she is as Lady Catherine de Bourgh with an eye patch.

Can you talk about your costumes? They’re very period, but with a whole new take on the era. I think Julian Day did a great job of keeping that Jane Austen feel but with a real twist, using leather and that military-war-feel, and then with slits in our costumes so we could kick. I couldn’t believe it when I got to wear black skin-tight trousers!

You’ve done a lot of classic period material like Downton Abbey and War and Peace. Maybe zombies is the way in to a younger audience for these classics? I think every movie should have a zombie version. Let’s get them in!

How do the zombies shed a light on Pride and Prejudice? It’s so interesting when you turn something on its head and add zombies into Jane Austen. It’s funny how the themes and ideas are really brought to light even more, like the strength of these young girls. And you find little hidden gems in it. It’s like Shakespeare. It’s so amazing to go to the theatre and see it set in completely wild and wonderful settings and I think it should be the same for everything.

How was Burr Steers as a director? He created a very relaxed set and he was really clear about his vision. He did the final edit on the script so he was so in control of all of it. 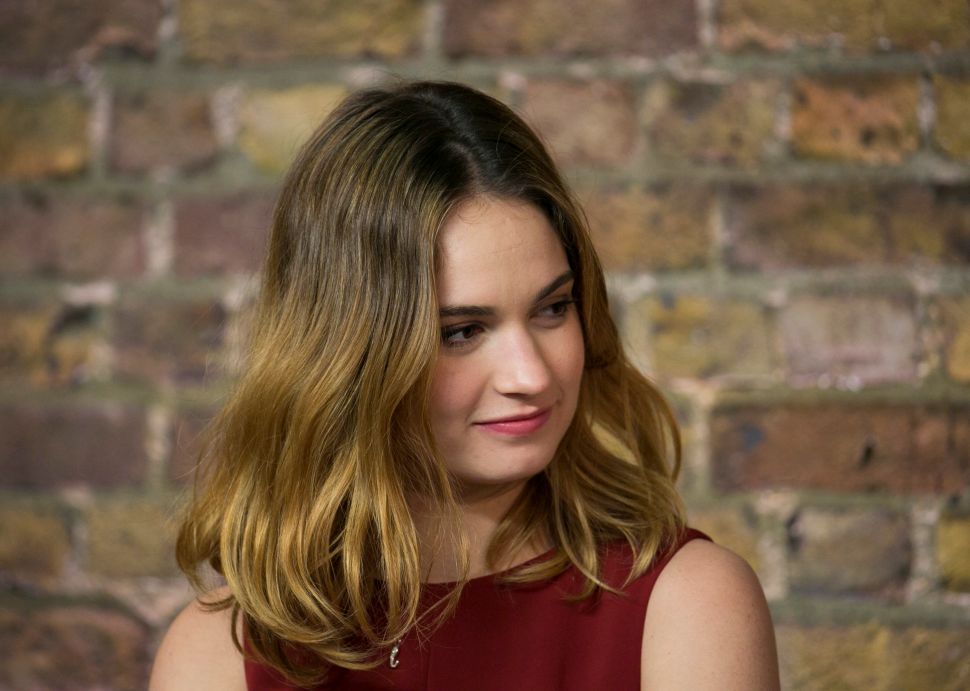