When someone enters a gallery and sees a piece of sculpture, it’s common for them to move around the object in order to view it from different angles. What is less common—in fact it’s quite rare— is for the sculpture to move past the viewer. Yet this is what happens when you enter the Nathalie Karg gallery during the run of Parisian-born artist Dorian Gaudin’s show “Jettison Parkway,” which is up through March 26.

The six-and-a-half foot tall aluminum cylinder in the center of the gallery is handsome enough, with its interior steel framework of gears and girders, but when it starts rolling quickly towards you, the common gallery activity (the mental act of viewing) quickly turns into a physical stance of self-defense. The large yet lightweight invention, which was designed to stop and start at repeated intervals thanks to a tiny motor and a weighted lever, wouldn’t actually hurt you if it ran into you, but its motile presence surprisingly forces one to reconsider how we usually interact with art.

But this artist’s desire to turn the art viewing experience into a physical encounter makes more sense when you look at his background. The son of the well-known Parisian choreographer (and brother of an up-and-coming Parisian choreographer), Mr. Gaudin was raised to consider how the figure moves through space. But this 30-year-old, Brooklyn-based member of the Gaudin family was gifted with an aptitude for construction, so he opted to study animation and engineering: two fields that involve craft and movement.

He also grew up a close friend of fellow boy-builder Neil Beloufa, an exciting artist whose forays into DIY videos, installations and mechanical constructions—many of which move—are being celebrated this month with a prized solo exhibition at MoMA. For years Mr. Gaudin has been funneling his building prowess into Mr. Beloufa’s work as an engineering consultant, but now he is focusing his skills onto his own sculpture, and the results vary from electrifying to enchanting.

Mr. Gaudin’s wall works, such as This Should Be A Plane, 2016, eschew motion, but offer an exquisite and beautiful display of material control instead. In these mixed media works, Mr. Gaudin impressively configures materials against their raw state, turning wet cement into perfectly smooth geometries and sheet aluminum into rippling waves of gradient color. His finesse appears effortless, and the variety of engaging compositions Mr. Gaudin creates purely with steel, screws and rivets, makes for an impressive debut.

With a delicate touch, a palpable joy of working with materials and, most importantly, a sense of humor, Mr. Gaudin connects to a much earlier group of Modernist sculptors like Alexander Calder and Constantin Brancusi, but his deep understanding of the viewer-object relationship in art—more specifically his innate sense of drama as it relates to scale and movement—also connects him to the ultimate post-minimalist space invader, Richard Serra. Certainly these are lofty precedents, but ones that make a well-rounded cartel of icons for a sure-footed youngster with ingenuity to burn. 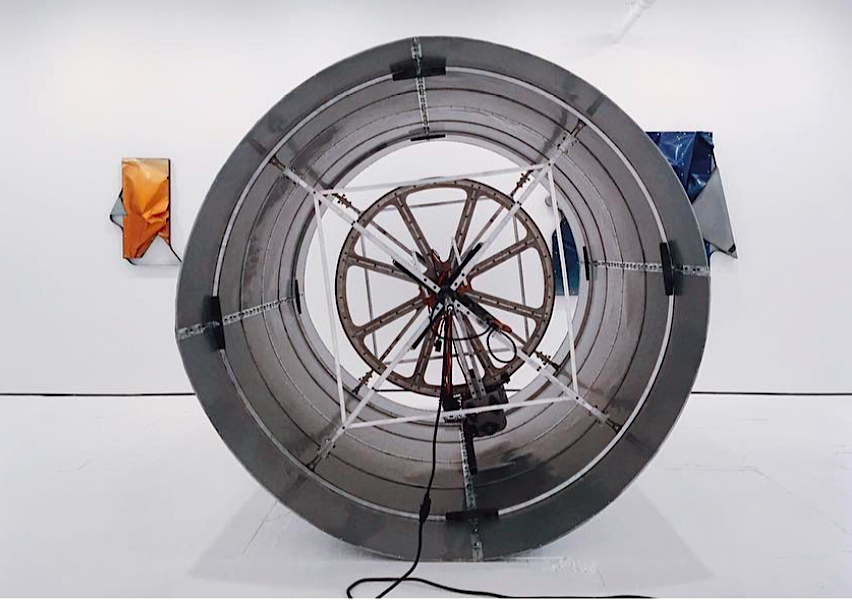