Council Speaker Melissa Mark-Viverto today is announcing a sweeping set of proposals aimed at reducing the inmate population on Rikers Island and keeping more inmates in borough-based facilities closer to home—with the ultimate goal of shuttering the controversial jail complex.

“For too long, Rikers has stood not for more justice, but for revenge,” Ms. Mark-Viverito said in her State of the City address, delivered in the South Bronx. “We must explore how we can get the population of Rikers to be so small that the dream of shutting it down becomes a reality.”

The city’s jails and its Department of Correction have been in a harsh spotlight for the last two years, amid investigations from the press and U.S. Attorney Preet Bharara that alleged a culture of brutality by correction officers, climbing violence between inmates, and pledges of reform from Mayor Bill de Blasio and Commissioner Joseph Ponte. Correction officials frequently note the poor condition of the jails, which they say put staff and inmates at risk, while inmate advocates argue the jail is hard to access for families who want to visit, is far from courts where inmates must make appearances, and is out of the public eye.

The vast majority of inmates at Rikers Island are awaiting trial and have not been convicted of a crime. Only 16 percent of those who do await trial at Rikers Island are ever sentenced to prison time, Ms. Mark-Viverito said today, and many inmates languish in the jail for months on minor charges simply because they cannot afford bail—a statistic thrown into sharp relief by the story of Kalief Browder, a teenager who sat in Rikers Island for almost three years after he was accused of stealing a backpack, only for the district attorney’s office to dismiss the charges. After he was released, Browder hanged himself.

Among the people most outspoken about the problems with the state’s bail system that led to Browder’s long detention is former Chief Justice Jonathan Lippman—who attended the speech today and who Ms. Mark-Viverito said would head a commission to explore a “community-based justice model that will complement existing reform efforts.”

“It will recommend ways to continue to reduce pre-trial detention rates, and assess moving adolescents and those suffering from mental illness off Rikers in the short term,” she said. “It will also look at utilizing more community courts and borough-based jail facilities.”

That could be a tough sell with some of her fellow City Council members. While several have outspokenly criticized Rikers, called for it to be closed, or at least called for inmates under 18 to no longer be held there, housing inmates in the neighborhoods they represent rarely goes over well with constituents. (Outposken Correction Officers Benevolent Association Norman Seabrook has often mocked Councilwoman Elizabeth Crowley’s insistence that young inmates be moved off Rikers by asking her to offer up space in her district.)

But Ms. Mark-Viverito made an emotional appeal through the story of Browder, whose mother was in the audience, citing the nearly two years he spent in solitary confinement for a crime of which he was never convicted.

“He endured unspeakable psychological and physical abuse. He was never even convicted of a crime, and the charges were eventually dropped,” Ms. Mark-Viverito said. “But it was too late. Kalief entered as a child, but left as a broken man. A few months later, Kalief died by his own hands. It was not one failure which led to his death; it was generations of failures compounded on one another.”

But perhaps looking to be pragmatic in addition to sympathetic, Ms. Mark-Viverito also made an economic argument for housing inmates closer to home.

“Far from the courthouses, it regularly costs the Department of Correction $25 million per year just to transport inmates. And if you want to visit friends or family or see an attorney, it typically takes them an entire day just to travel to Rikers and go through processing,” she said.

To that end, the Council will develop a “video visitation program”  so that family members who cannot make the often arduous trek to isolated Rikers Island can see incarcerated people via video chat from local libraries.

The Council all also work with the mayor’s office, Ms. Mark-Viverito said, to create a “Municipal Division of Transition Services”—aimed at helping people re-enter communities with education and drug treatment, in an effort to reduce recidivism.

Ms. Mark-Viverito hit on another priority of Mr. Lippman’s—getting the state to raise the age of criminal responsibility to 18, something Gov. Andrew Cuomo unsuccessfully sought to do last year.

She also announced plans for legislation to create an inspector general for the Department of Correction—but it’s unclear how it would differ from the IG post that already exists to oversee the department, which is part of the Department of Investigation. 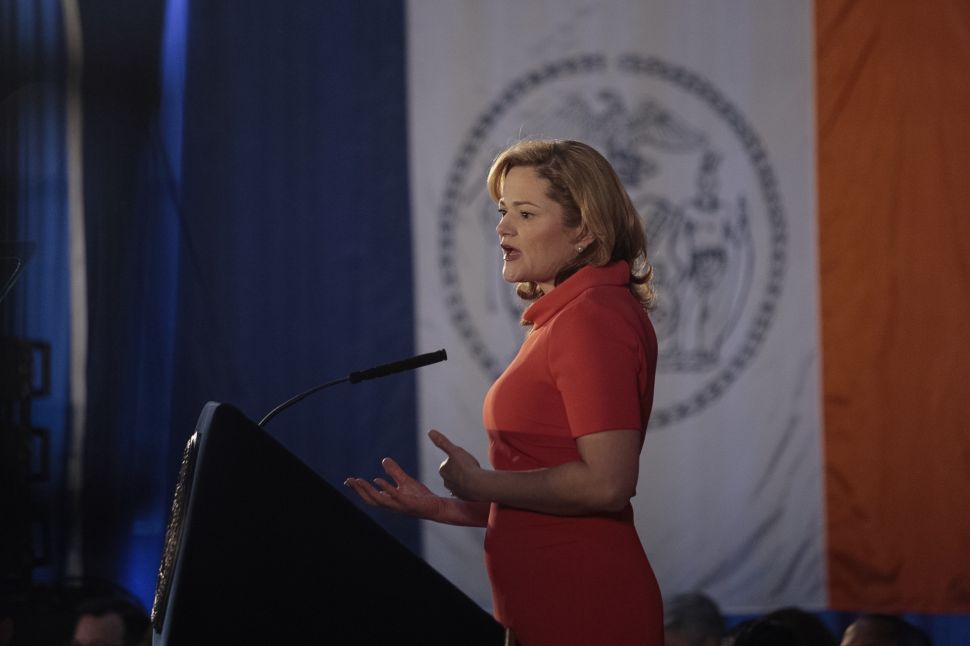