Welcome to our new TV Fashion Download column, where TV Ate My Wardrobe‘s Emma Fraser discusses the trends in television apparel. First up: Marnie’s couture mess of a wedding on GIRLS.

Back when Marnie was trying to make her mark on the art scene and Booth Jonathan in season 2 of GIRLS she wore the most amazing and incredibly impractical plastic gold transparent dress which perfectly demonstrated Marnie’s tendency to try too hard and come away with nothing. In retrospect that maybe made more sense than her decision making when it comes to Desi and there is much more to worry about with this wedding than the weather going full Alanis Morissette on this very special occasion.

When–d’uh–Marnie is definitely a cross between Blake Lively and Taylor Swift. Everything must look spontaneous, but there’s organized fun scheduled for those super chill looking instas.

Marnie has chameleon like tendencies with her style choices, but she is the kind of chameleon who isn’t so good at the blending in part and she never quite hits the mark without looking phony. So when she wants a “Laurel Canyon Classic” wedding aesthetic it looks like she got everything from Preserve on discount just before it shuttered (RIP). She dismisses the notion of it being like a Selena Gomez video or that she’s borrowed Vanessa Hudgens’ signature flower crown clinging to the idea that she is much more a Joni Mitchell. When–d’uh–Marnie is definitely a cross between Blake Lively and Taylor Swift. Everything must look spontaneous, but there’s organized fun scheduled for those super chill looking instas. It’s no wonder Bebe can’t get a handle on exactly what Marnie wants as her directions are equal parts specific and vague as if she is regurgitating Pinterest Board titles and Vogue editorials.

Instead she should embrace on the other aspects she mentions namely Ralph Lauren and her “white Christian woman” heritage (just say WASP). But no she’s trying to go full boho in an attempt to play up to the musical career she is trying to forge with Desi. There is an Edward Sharpe video that has given Marnie her “very specific vision” and this is almost as funny as the moment when she claims she’s a “totally easy going girl.” We’re now five years into GIRLS and while a lot of the characters have a least registered their glaring flaws; Marnie still remains blissfully unaware of how she makes everything feel so forced.

The first mistake Marnie makes (other than agreeing to marry Desi) is to put Hannah in charge of keeping everything super calm because it turns out that in season 5 Jessa is the woman for the job, as she not only looks for the positive in the rain situation (fertility!), but she also returns just at the right time to fix everything that has gone wrong while she has been out. Including bad make-up such as Shoshanna’s inexplicable Marilyn Monroe look (which makes her far more cartoony than she did before) and Hannah’s very sad and wet bridesmaids dress. Changing Marnie’s hair from the not so relaxed curls to a braid instantly delivers on aesthetic she was striving for and it helps that Jessa’s somewhat hippy vibe is the one that Marnie is trying to emulate.

Jessa also provides super cute matching yellow rain coats that are tossed to one side as they make their way to the aisle because it has stopped raining and she is the only one in this group who has been through this so it makes sense that she is sympathetic to Marnie’s plight. No a marriage should not be referenced in such a negative sounding way, but hey it’s Desi.

There is the question of smooching Adam – which I am maybe here for? – when it comes to Jessa’s good friend status, but on a scale of 1-10 on the Marnie makeover montage she scores a Tai from Clueless. Gone is the incredibly 90s dark lip liner and not quite Taylor Momsen levels of smoky eye and enter the Cali fresh faced look she was striving for. And damn does Allison Williams look stunning.

For all my shitting on Marnie’s bad decisions that wedding dress choice cannot be faulted even with the Coachella like floral crown cliché addition. It is a beautiful gown. And this is the other thing about Marnie; no matter how many times she gets knocked down – and yep that number is high – she has the tenacity and dogged spirited to get back up and continue to aim high. Part of this comes from how unaware she is, but you can’t say that this woman doesn’t go after her dreams. I have this real strong love/hate back and forth with Marnie and this season premiere highlights everything that makes me root for her success and failure in equal measure.

It could also be why I am hoping Ray or anyone (Charlie?) intervenes at the last minute and stops this certain disaster from taking place. If no one does make a grand Graduate gesture there is the upside as Marnie will no doubt try and spin their union as the next Civil Wars/The Swell Season/The White Stripes and that does mean plenty of super awkward and tone deaf attempts to be music biz cool. 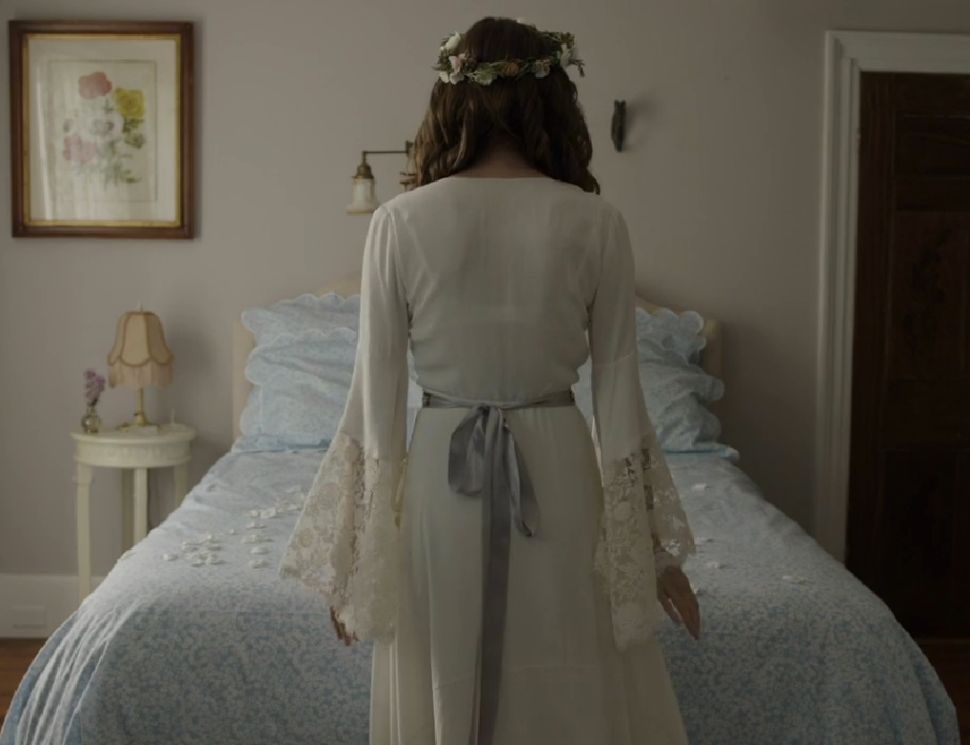