Near the end of episode four of Marvel’s Agent Carter, we see a creepy talent agent in the 1930s discover Agnes Cully — now Whitney Frost, murderess extraordinaire — outside a movie theater. He tells her she’s going to need to change her name. “That’s the beauty of Hollywood,” he says. “You can be whatever you want.” And this is the problem everyone faces this episode — trying to be the person they want to be. The organization probably known as Hydra is a problem too, I guess. While Peggy learns a lot this episode, it’s almost all things the audience knew, which made it feel like our wheels were spinning.

This episode frames itself with flashbacks from both Peggy and Whitney’s pasts as we see both of them struggle to grow up in a patriarchal society. It’s all a bit heavy-handed. People were sexist in the past? What a novel idea.

First we see Peggy as a young girl in England, imagining herself as a knight saving a princess, playing with her brother Michael. Peggy Carter: not like other girls, apparently. But in the next flashback it seems she is. Peggy is working as a code breaker during the war and showing off her engagement ring to her coworkers. I gasped at first, but it’s a cheap reveal — obviously this guy doesn’t matter, or he’d have come up before. Her boss pulls her away from the ooo’s and aah’s to reveal that she’s being tapped as a spy in the war. In the next flashback to her engagement party — which is very softly lit — we meet her horrible fiancé Fred, who explains to Michael that “we” turned the job down. Yuck. Michael reminds her that she always wanted a life of adventure, which she denies in the softest voice Hayley Atwell has ever used in this role. In the next flashback, Peggy tries on her wedding dress, only to receive news of her brother’s death on the front lines. Peggy cries in such soft lighting that she looks like a ghost. She leaves her ring and goes to fight and become the spy we know and love. Unless Peggy’s ex-fiancé shows up as a spy himself, these flashbacks were fun but sort of pointless.

Meanwhile Whitney’s flashbacks end less pleasantly. We see her as a young girl in Oklahoma with a mother and “uncle” who want her to talk less, smile more. When the “uncle” leaves her mother for someone younger and prettier, her mom puts her in front of the mirror for the least subtle talk about how all that matters is her pretty face. She ends in Hollywood with the creepy agent, seemingly leaving her intelligence behind her, but we know better than that. Again, I’m not sure what this was supposed to add. The importance of being pretty has been such a central part of Whitney’s storyline that this felt like overkill.

In the present, Peggy is using “vacation” as an excuse to stay in Los Angeles, against Thompson’s orders. He does not appear in this episode, which is odd since at the end of the last episode he seemed to realize his mentor Vernon Masters is in league with the evil people, but he apparently went back to New York. Is Thompson part of the club now?

Peggy and Jarvis, with the help of animal tranquilizers and Jarvis’ amazing impression of an American policeman, kidnap Hunt, who tried to whack Peggy last episode. Sousa, initially angry that Peggy kidnapped someone, works with her to interrogate him. After they inject him with a drug they tell him is a malaria, but is really a super intense cold Howard Stark accidentally made while trying to cure the cold (typical), he spills. When Peggy offers him protection, he says, “They’re in everything and what they can’t buy they destroy. President McKinley, Black Tuesday, you think those things just happen?” He finally gives us a name for the evil meeting of evil guys around the evil looking table — the Council of Nine. Apparently they record all their meetings and keep the recordings in a secret room, which doesn’t seem like best practice for an evil organization.

Peggy and Sousa get a warrant to raid the club and just when they might be getting somewhere Vernon Masters and the War Department show up to audit the SSR. Masters threatens that he will brand all Peggy’s friends Communists. Specifically he talks about a metaphorical flood. A hydra is a -based monster. Just saying.

Peggy tells Sousa that maybe they should chill but he’s not scared. He tells her, “I’m in this with you until the end, Peggy,” echoing Bucky and Steve Rogers’ mantra: “I’m with you till the end of the line.” I’ll note here that we haven’t seen Sousa’s girlfriend since the premiere.

The duo let Hunt think he’s escaped, but really they’ve bugged him as he runs home to Whitney and her useless husband. Chadwick spent the episode trying to get her to come to a photo shoot, which might be a problem given the giant black crack on the side of her face. He tells her, “You’ll be the most beautiful first lady this country has ever seen,” illustrating the extent to which he does not understand his wife, even before she had super powers.

Meanwhile, the non-corporeal Dr. Wilkes is not having an easy time regaining his former state. He sees a giant black zero matter crack open and zones out, staring into it. Later he tells Peggy that he feels tired all the time, like something is calling him to it. Though they haven’t put this together, it appears that Whitney — or the zero matter inside her — wants him back. Even though I really like Dr. Wilkes, I don’t think he’ll make it out of the season alive, which is unfortunate because he and Peggy have great chemistry. The love triangle is clicking and it’s fun.

Finally, Hunt tells Chadwick and Whitney that Peggy kidnapped him while our crew listens on their radio. Chadwick goes off about deporting Peggy, while Whitney cuts right to the chase — what did he tell them? Hunt admits he didn’t tell her what the couple is up to but he named Council members. Whitney interrupts to show off her people-absorbing powers and Hunt is gone. The radio feed cuts out, leaving Peggy and friends shaken.

Chadwick asks, “What are you?” and Whitney, echoing her agent, tells him, “Whatever I want.” But can anyone be whatever they want in Hollywood? Whitney finally has the power to bend her life the way she wants, though it’s destroying her most useful tool so far — her face. Wilkes is bodiless, Jarvis is playing at being a spy, Peggy is still butting heads with old white men, and Sousa is chief but he’s not in the driver’s seat. They’re not the first to find California dreams more complicated then they first appeared. Maybe next season — please let there be a next season — they’ll try Boston. 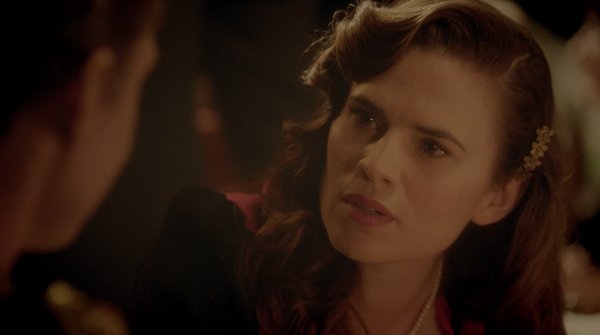